Billing itself as “the world’s first and only fullstream oil and gas company,” Baker Hughes Inc. and GE Oil & Gas announced Monday that their mega-merger — estimated at $32 billion — is complete. 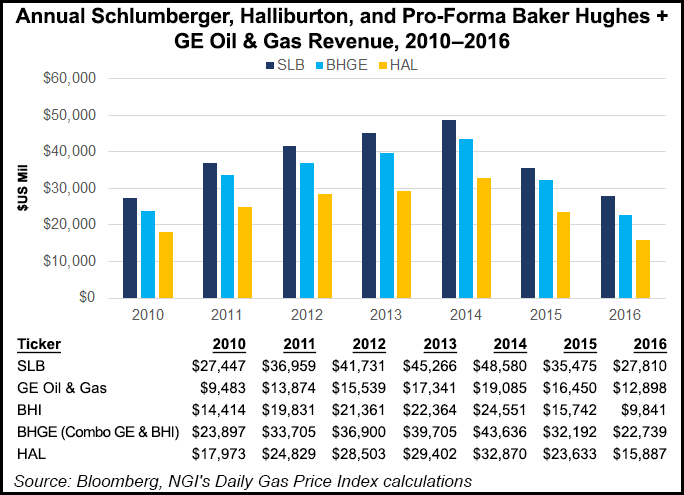 With the merger having previously received clearance from European regulators and from the U.S. Department of Justice, the new Baker Hughes, a GE company (BHGE), began trading on the New York Stock Exchange Wednesday under the ticker BHGE, replacing BHI, which was delisted at the close Monday.

Since its announcement last fall, the GE/Baker Hughes tie-up has promised to create a new oilfield services (OFS) giant focused on leveraging digital and advanced technologies in the OFS space.

“Disruptive change is the oil and gas industry’s new normal,” BHGE CEO Lorenzo Simonelli said. “We created BHGE because oil and gas customers need to withstand volatility, work smarter and bring energy to more people. Our offering is further differentiated from any other in the industry across the value stream and enables and assists our customers in driving productivity, while minimizing costs and risks.

“BHGE has proven technologies and experience with the spirit of a startup, and our leadership team looks forward to quickly demonstrating the strengths of the new company. Our focus is on integrating our businesses quickly and seamlessly so we can drive long-term value for all of our stakeholders.”

GE CEO Jeffrey Immelt said, “BHGE can help our customers be more productive in any cycle, especially today’s. It’s a smart deal for our combined customers, shareholders and employees. Lorenzo and his team are world-class leaders and will focus on accelerating the company’s capability to extend the digital framework in ways oil and gas customers have never seen before.

“The completion of the transaction marks a new era in the industry, and I am extremely proud of our team’s focus, dedication and diligence, which resulted in the completion of this combination in just eight months.”

The new global OFS company will consist of roughly 70,000 people and operate in more than 120 countries. Maintaining dual headquarters in Houston and London, BHGE will have four product companies — OFS, oilfield equipment, turbomachinery and process solutions, and digital solutions — and 24 product lines and segments.

Immelt will serve as chairman on BHGE’s board of directors, with former Baker Hughes CEO Martin Craighead serving as vice chairman.

With the deal complete, BHGE now overtakes Halliburton as the No. 2 OFS provider in terms of revenue. Schlumberger Ltd. remains the No. 1 OFS.

Halliburton had attempted its own merger with Baker Hughes, but the proposed tie-up fell apart last year under regulatory challenges.