The North American division of France’s GDF Suez S.A. announced Tuesday that it had signed a purchase agreement with a subsidiary of Montreal-based Gaz Metro to provide up to 1.0 Bcf of liquefied natural gas (LNG) to help meet peak demand in New England for the 2014-15 winter season. 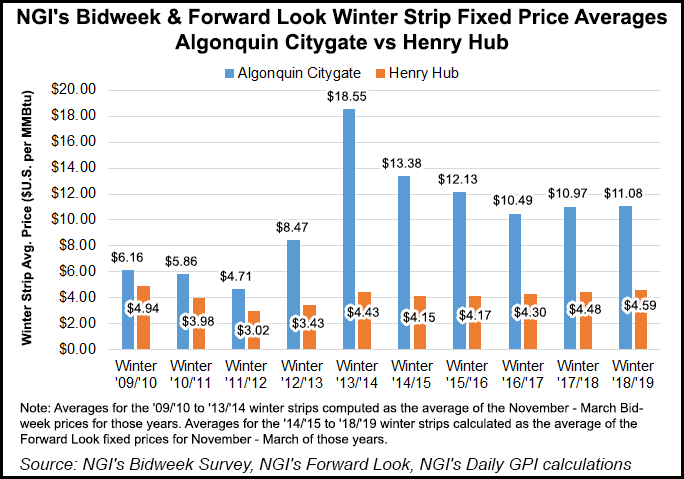 Under the agreement, GDF Suez Gas NA (GSGNA) will purchase 475 MMcf of natural gas over a five-month period, starting in July, from Gaz Metro LNG LP. The agreement includes an option to purchase an additional 500 MMcf during the same time frame. Financial terms of the deal were not disclosed.

GSGNA spokeswoman Carol Churchill told NGI on Wednesday that Gaz Metro will liquefy the gas, which will then be transported via tanker truck by a third party to utilities and 47 above-ground storage tanks throughout New England. The LNG will supplement supplies for the winter season. GGSGNA operates the Distrigas LNG import terminal in Everett, MA, importing and distributing LNG throughout New England.

Shipments of LNG to the region could help minimize the natural gas price spikes witnessed in New England during recent winters. During the 2012-2013 winter, the Algonquin Citygate in New England traded at more than a $5 premium to the benchmark Henry Hub. During the 2013-2014 winter, that basis exploded to more than $14 as the the Northeast shivered through a number of polar vortices (see chart).

In a statement, Frank Katulak, CEO of GSGNA, said the agreement with Gaz Metro “represents an important step in the further diversification of our supply portfolio, as well as an opportunity for us to take advantage of gas purchases on this continent to increase our supply assets, and to continue to ensure reliability to New England when resources can be tight — the winter heating season.

“Additional and reliable supplies such as these will also allow us to cost effectively provide more services to the marketplace by optimizing existing natural gas infrastructure in the region.”