Gazprom PJSC has reduced deliveries of natural gas to some of Europe’s biggest buyers and Russia has warned that further cuts could be ahead, sending benchmark prices on the continent higher Thursday. 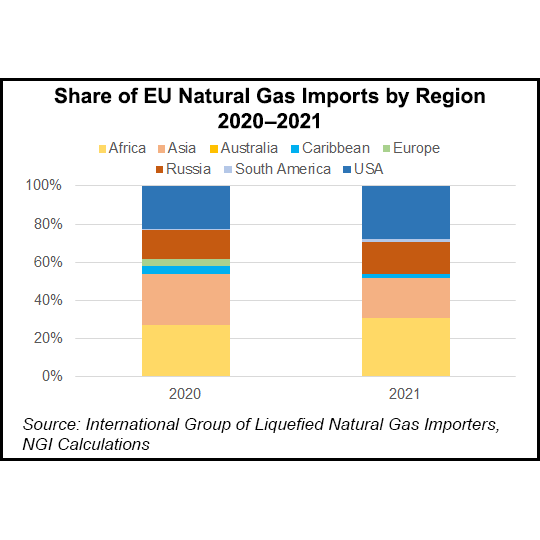 Germany and Italy are Europe’s largest gas consumers. The reductions come at a time when the Freeport liquefied natural gas export terminal in Texas is offline through the end of the year after an explosion last week, which is likely to further cut into Europe’s supplies.

Gazprom’s latest cuts have escalated the continent’s gas crisis after smaller buyers in Bulgaria, Denmark, Finland, the Netherlands and Poland have been cut off. Russia supplied 45% of Europe’s natural gas last year, according to the European Commission.

The West has hit Russia with sanctions, and Europe has moved aggressively to diversify its supplies as the war in Ukraine jeopardized Russian imports. Smaller buyers were cut off after they failed to comply with a Kremlin requirement to pay for gas deliveries in rubles. However, larger buyers like Germany and Italy complied with the mandate.

“The Russian side’s argument is simply a pretext. It is obviously a strategy to unsettle and drive up prices,” German Economy Minister Robert Habeck said Wednesday.

Russia has blamed sanctions for stranding equipment abroad that is needed to complete maintenance on a Nord Stream 1 (NS1) compressor station. NS1 is one of the largest conduits for moving gas to Europe. Gazprom said the issues have cut capacity by 60% to 67 million cubic meters (MMcm), or 2.3 Bcf/d.

According to reports, Russia’s ambassador to the European Union said Thursday further problems to repair the compressor station could lead to a shutdown of the entire NS1 system.

Meanwhile, media also quoted Gazprom chief Alexei Miller as saying “our product, our rules,” in reference to the sanctions and delivery reductions. He reportedly said at the Saint Petersburg International Economic Forum Thursday that little could be done to resolve the compressor station issues until Siemens AG finds a way to work around the sanctions to deliver necessary equipment.

In a note Thursday, Goldman Sachs Commodities Research analysts remarked on the NS1 outage. They said “there’s no clarity regarding the duration of cuts.” As a result, flows on the system are likely to remain “severely restricted” at least through July, when the entire system is expected to undergo maintenance (July 11-20).

Russia’s gas exports to Europe through its three main routes were down 19% on Thursday to 103 MMcm, or about 3.6 Bcf, according to Schneider Electric. Last year at this time, Russia was delivering about 400 MMcm/d, or 14 Bcf/d.

Gazprom acknowledged this week that deliveries to countries outside the former Soviet Union from the start of the year through Wednesday (June 15) had declined by nearly 30% from the same period of 2021.

The latest cuts again put the market on edge. The Dutch Title Transfer Facility hit an intraday high of nearly $46/MMBtu, or about $9 above Wednesday’s closing price.

The latest cuts again put the market on edge. The Dutch Title Transfer Facility hit an intraday high of nearly $46/MMBtu before gaining about $2 to finish at more than $38.

A large fire also reportedly occurred Thursday at Russia’s Urengoy natural gas field in Western Siberia. A Gazprom affiliate said the fire had been extinguished and production was not impacted. No injuries were reported.