After exiting the Appalachian Basin earlier in the year, Gastar Exploration Inc. plans to spend the rest of 2016 delineating its multiple reservoirs within Oklahoma’s Sooner Trend of the Anadarko Basin, mostly in Canadian and Kingfisher counties, more commonly known as the STACK. 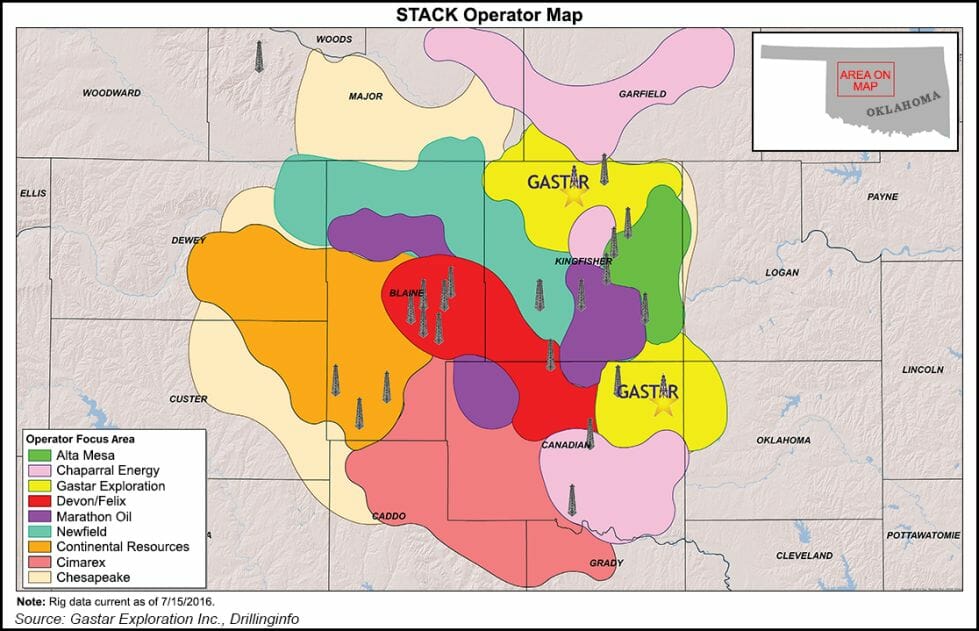 With an estimated 3,900 gross (1,500 net) drilling locations in its 109,000 STACK acres, Gastar is planning a nine-well drilling program to delineate the acreage and determine whether to sell or further develop its assets, management told analysts during a 2Q2016 conference call last week.

The Houston-based exploration and production (E&P) company plans to spud at least six of the nine wells in 2016, raising its full-year capital budget to $61.2 million from $40.5 million.

CEO J. Russell Porter said drilling and completion costs near Gastar’s leasehold are around $4-4.5 million per well, with multiple producing zones that yield a mix weighted to oil.

“At the prevailing commodity prices and current well costs, we project very attractive internal rates of return from the development of each of these prospective formations,” Porter said. “Offset operators are having success developing numerous producing formations in the STACK,” including the Meramec, Osage, Oswego, Woodford and Hunton.

Gastar has begun drilling the McGee 29-1H test well in the Osage in southern Garfield County, which is expected to be completed by late September. From there, the E&P will likely move its one rig to Kingfisher County to drill a test well targeting either the Meramec or the Oswego. Gastar may take steps to fund additional drilling beyond the nine-well program to further demonstrate the value of its leasehold position and hold acreage by production, according to Porter.

“Over the next couple quarters, we’ll obtain additional well results from operated and non-operated drilling activity that allow us to evaluate our position and determine how to move forward with the development and/or potential [merger and acquisition] activity,” he said.

Excluding the output from the Appalachian Basin assets that were sold in April (see Shale Daily, Feb. 22), production averaged 6,200 boe/d in the second quarter, flat year/year and a slight increase over the 6,100 boe/d produced in 1Q2016.

“It bears noting that the Osage formation looks excellent at the Holiday Road location, and we’re currently participating in the drilling of a non-operated Osage well adjacent to the Holiday Road well,” Porter said.

Average sales prices for the quarter, excluding hedges, were $41.82/bbl for oil, $1.84/Mcf for gas and $12.02 for NGLs, compared with prices of $47.68/bbl, $1.10/Mcf and $7.34/bbl in the year-ago quarter. Average sales price before the impact of hedging, was $25.60/boe for the quarter, compared with $12.07/boe in the first quarter and $18.79/boe in the year-ago period. CFO Michael Gerlich attributed the higher per-boe price to a production mix weighted more heavily to liquids following the Appalachian divestiture.

Lease operating expenses (LOE) totaled $4.6 million, down from $7.2 million in 2Q2015 and $6.1 million in the first quarter. LOE excluding the Appalachian Basin costs decreased 20% to $4.5 million, driven in part by a $1.6 million decrease in workover expenses.

Depreciation, depletion and amortization (DD&A) costs declined to $5.6 million in the quarter, compared with $16.1 million in the year-ago period and $13.7 million in the first quarter. DD&A costs were lower as a result of previous impairment charges and factors related to the Appalachian divestiture.

General and administrative (G&A) costs totaled $6.3 million in the second quarter, compared with $4.4 million in the year-ago quarter and $5.7 million in 1Q2016. Management attributed the higher G&A expenses to an allowance for a $2 million bad debt expense charge related to a third-party production purchaser’s bankruptcy.