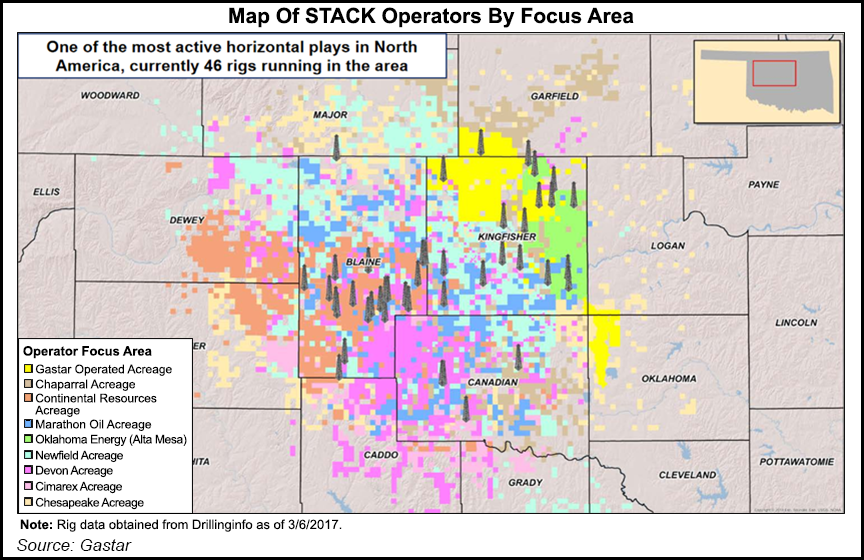 Before the acquisition, Gastar held an interest in the majority of the acquired producing wells and leasehold. Current net production associated with the acquired well interests is 330 boe/d (49% oil), and 57% of the acreage is currently held-by-production. The acquisition price of $51.4 million has an effective date of March 1, 2017 and is subject to customary adjustments.

STACK stands for Sooner Trend of the Anadarko Basin in Canadian and Kingfisher counties.

“This acquisition further increases Gastar’s position in the STACK Play to a total of 62,370 net surface acres, excluding 27,100 net acres in the WEHLU and surrounding area,” said CEO J. Russell Porter. “Acquiring additional working interest within our core STACK position in leases that Gastar currently owns and operates is an attractive approach to creating additional value.

“With investors more focused on execution/well performance of the company’s current assets as well as balance sheet restructuring, we expect a mixed reaction to the deal at the [market] open today,” Douthat wrote. Gastar shares were up more than 2% in early trading Thursday.

Gabriele Sorbara, an analyst with The Williams Capital Group, wrote, “After ascribing a value to the acquired production, we arrive to a valuation of about $7,600 per undeveloped acre, which is at a discount to recent transactions in the region.”

“Through our planned 2017 capital program, a large majority of the acquired leases will be held by production under our current drilling plan,” Porter said.