Gastar Exploration Inc. said it has nearly finished drilling its first wells targeting the Utica Shale in West Virginia and the Hunton Limestone in Oklahoma, and plans to drill two test wells into the Woodford Shale and the Meramec Mississippian formation in Oklahoma later in the year. 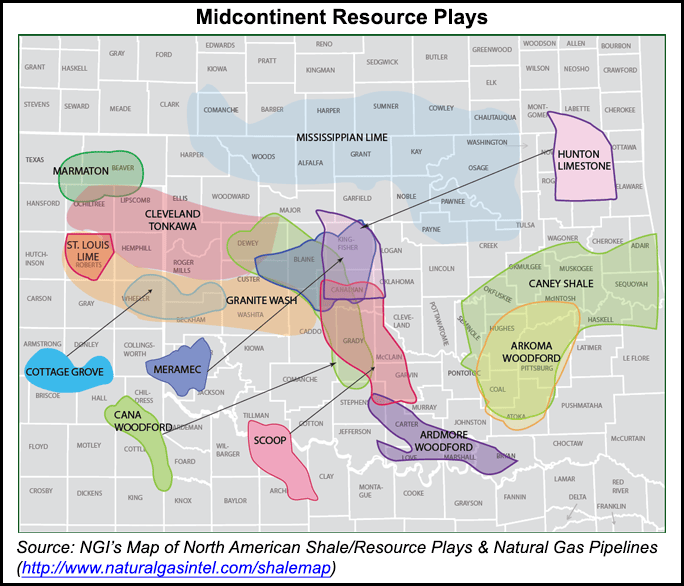 In a statement Wednesday, CEO J. Russell Porter said the Houston-based company expects 2014 to be a year in which the company continues to grow value to its assets and expand in areas where it is already producing — the Midcontinent and Appalachia.

“[Our] activities in Oklahoma and West Virginia have the potential to significantly impact our reserve base now and in the future, as well as provide substantial additions to our drilling inventory going forward,” Porter said.

The company also completed and placed into production two gross (1.9 net) operated wells during 1Q2014, in addition to one gross (0.8 net) well that was completed in 4Q2013. Gastar said a fourth well — Easton 22-1H, located in Oklahoma County, OK, and targeting the Lower Hunton — is currently being drilled and is expected to begin flowback in late May.

The Easton well is Gastar’s first to target the Lower Hunton on its acreage in the West Edmond Hunton Lime Unit (WEHLU), located across Oklahoma’s Canadian, Kingfisher, Logan and Oklahoma counties.

Gastar said it recently assigned approximately 9,600 gross (4,200 net) acres in Kingfisher County to an undisclosed third-party operator for cash. The operator is required to drill two test wells targeting the Woodford Shale by July 31, 2015, with the first well spudded by Sept. 1, 2014.

“Though we will not receive any of the production from these wells, we will benefit from the valuable well data that will help us determine, on a cost-free basis, the stacked play potential in this area,” Porter said during an earnings call on Thursday. “Under the ‘checkerboard’ pattern acreage assignment approach, we held onto adjacent acreage interspersed in the area, which should greatly reduce the drilling risk on offsetting acreage.

“Depending on the success of the third-party operator’s drilling, we may have the potential to book proved undeveloped reserves on our offsetting acreage based on their drilling results.”

Porter said Gastar plans to drill one operated horizontal test well targeting the Woodford, at an estimated to cost $10-12 million, this fall. He said the company also plans to drill one test well targeting the Meramec in Kingfisher County in the fourth quarter, also at a cost of $10-12 million. If successful, the Woodford well would enter production in 3Q2014 and the Meramec well would follow in late 4Q2014.

“To fund our Woodford Shale and/or Meramec tests, we are reviewing the possibility of redirecting a portion of our operated Hunton capital to these efforts, rather than increasing our Midcontinent drilling capital program,” Porter said.

“We’re redirecting just a portion of that capital to assess these other formations,” Porter said. “It’s not in any way a non-confidence vote in the Hunton because we’re very encouraged by the results we’re seeing from the wells that are cleaning up now and the well we just [drilled to total depth].

“These other formations we think will have significant value. It’s likely that they might have, while slightly lower returns, a little less variability than the Hunton. So we want to get that understood, [and] we want to start de-risking this so we can demonstrate the value and hopefully get that added in on everyone’s assessment of net asset value.”

“Volumes were down sequentially due to natural production declines which were not offset by any new wells being brought on production during 1Q2014,” Gastar said. “Our liquids-rich gas production, on average, yielded approximately 28 bbl of condensate and 45 bbl of NGLs per MMcf of gas sold during 1Q2014.”

Gastar said it had planned to place three wells targeting the Marcellus from its Goudy pad in Marshall County, WV, into production in late 2Q2014, but those plans were delayed “pending the resolution of a non-lessee surface owner dispute.” Gastar said it plans to complete five gross wells from its Armstrong pad in 3Q2014, and five gross wells from its Hansen pad in 4Q2014. By the end of 2014, the company said it expects to have 67 total gross operated wells targeting the Marcellus capable of being turned into production.

The company said its Marcellus production was negatively impacted after a 12-inch diameter pipeline in Marshall County, WV, ruptured and caught fire on April 5 (see Shale Daily, April 11; April 7). The pipeline is owned and operated by Williams Partners LP. Gastar said it lost 162 MMcf of natural gas, 4,900 bbl of condensate and 8,000 bbl of NGL production for the quarter.

The company said it expects to complete drilling its first well targeting the Utica Shale, Simms U-5H, by the end of May and place it into production in 3Q2014. Gastar will then move its drilling rig to Wetzel County, WV, to continue drilling wells targeting the Marcellus and Utica.

Gastar reported a net loss attributable to stockholders of $2.0 million for the first quarter, a loss of 3 cents/share. Excluding the impact of a $3.2 million loss resulting from the mark-to-market of outstanding hedge positions and non-recurring corporate restructuring charges of $235,000, adjusted net income attributable to stockholders was $1.4 million (gain of 2 cents/share).