Gastar Exploration Inc. has a new financial partner in Ares Management LP, announcing last week that the investment firm has agreed to provide $425 million to help refinance its balance sheet and provide the liquidity the company needs to continue de-risking its Midcontinent assets. 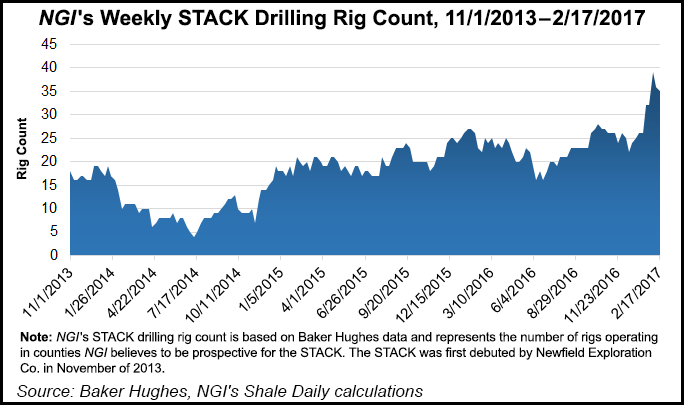 In a deal expected to close this month, Ares would provide a $250 million term loan and take $125 million in secured convertible notes and $50 million of common stock. The financing allows Gastar to wipe out $70.4 million of bank debt and $325 million of bond debt that could eventually help to reduce its leverage. The financial overhaul also allows the pure-play operator more flexibility to delineate its Oklahoma properties in the Sooner Trend of the Anadarko Basin, mostly in Canadian and Kingfisher counties (STACK).

“While this new capital structure does not provide an immediate, comprehensive resolution to our leverage position, we believe it establishes a very achievable path toward further de-levering our balance sheet through a combination of increasing cash flow from drilling operations as well as the potential conversion of the $125 million secured convertible notes,” said CEO J. Russell Porter.

Proforma for the deal, financial analysts said Gastar would have liquidity of $143.2 million, including an undrawn borrowing base of $85 million and $58.2 million in cash. Ares would also get two seats on an expanded board of directors.

Gastar became a Midcontinent pure-play last year after it sold its Appalachian Basin assets to Tug Hill Inc. for $80 million. It’s been working to prove its STACK position since. Under ajoint development agreement with an undisclosed investor, the company is focusing on the Meramec. Outside of the joint venture, Gastar is developing the Osage and Oswego formations.

The company announced results from four wells last week, saying its Ingle 29-1H and the Geis 31-1H in the Meramec reached initial production (IP) rates of 1,037 boe/d and 877 boe/d, respectively. While financial analysts liked the new financing arrangement with Ares, they noted results from the company’s first Osage and Oswego results were lackluster and in line with poor results reported to the state by other operators.

The company’s first Osage well, the McGee 29-1H in Garfield County, OK, tested at an IP rate of 414 boe/d. The McGee was drilled to the lower Osage and its production rate was impacted by 30% of the wellbore being completed outside the primary zone. The well was cored through the Osage and Woodford formations and that information was used to re-target the remaining 70% of the lateral into the target zone. The core also showed the presence of an upper Osage target that the company plans to test in the future.

The company’s first Oswego well, the Tomahawk 7-1H in Kingfisher County, tested with an IP rate of 418 boe/d. Both wells had short laterals. Gastar plans to focus more this year on the Osage formation. The company has set a preliminary 2017 capital budget of $84 million.

Gastar finished 2016 with proved reserves of 25.6 million boe, down 30.3 million boe from 2015 on the company’s Appalachian sale and a sharper focus on the STACK.