Natural gas has broken below the $2/MMBtu mark earlier than expected this year, and now the commodity faces a “gasmageddon” that could see prices stay below $2 on average through 2020. 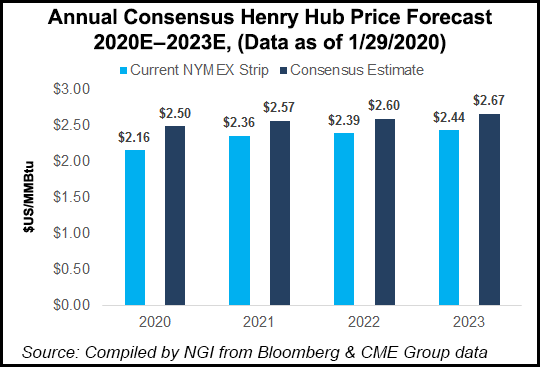 That’s according to a new BofA Global Research Report, in which analysts reduced their forecast for 2020 natural gas prices to $1.99 on average. The firm dropped its expected natural gas price this year “to reflect the risk that there is little room for bearish errors from mild weather, high renewable generation or reduced liquefied natural gas (LNG) exports. In addition, we believe both Rockies coal and global gas provide a soft ceiling in the mid-$2s for Henry Hub this summer.”

The long-term outlook doesn’t appear much rosier. BofA’s 2020 forecast comes as the Energy Information Administration’s (EIA) updated Annual Energy Outlook 2020 shows natural gas prices stuck below the $4 mark out to 2050. The agency expects sub-$4 pricing to persist “because of an abundance of lower cost resources, primarily in tight oil plays in the Permian Basin. These lower cost resources allow higher production levels at lower prices during the projection period.”

Higher inventories heading into the 2019/20 winter meant the market “needed early and sustained cold weather” to even have a chance of sustaining higher prices, the BofA analysts said. And as the mild January temperatures have demonstrated, “Mother Nature has not been kind to natural gas prices” as of late.

Even with sustained cold, “we expected Appalachian coal prices, which are 40% lower year/year, to limit winter natural gas upside,” the BofA analysts said. “Once the November cold spell was over, the warm weather brought forward a ”gasmageddon.’ We thought natural gas risked breaking the Jefferson in 2020, but did not expect it as soon as January.”

Despite an “impressive” 8 Bcf/d ramp-up in LNG exports over the past four years that has been bolstered further by about 2 Bcf/d of growth in exports to Mexico, these demand gains have been dwarfed by roughly 22 Bcf/d in production growth since January 2016, the BofA analysts said.

“In order to balance, the natural gas market has had to price lower to displace Rockies coal in the power sector,” they said. “Even with our projected increase in power sector natural gas demand, we estimate natural gas stocks end the summer at 3.85 Tcf (more than 100 Bcf higher year/year).”

“Unfortunately, we estimate the global gas glut will persist through at least 2021. In order to escape the current low natural gas price environment, production must decline, or at least stop growing, in order to allow demand to catch up. But the transition to associated gas driving production growth makes this even more challenging.

“In addition, the main demand growth engine, LNG exports, slows over the next year as the final of the first wave of projects enters service.”

There could be a silver lining here, however, as persistent low prices could allow gas to displace Rockies coal not just through economic switching but eventually through permanent coal retirements, according to the BofA team.

“This not only helps reduce U.S. emissions, it might also provide structural long term natural gas demand,” they said.

Perhaps a reflection of near-relentless bearishness in the futures market in recent weeks, the BofA forecast for 2020 prices comes in on the low side of other recent predictions for what lies in store for natural gas this year.