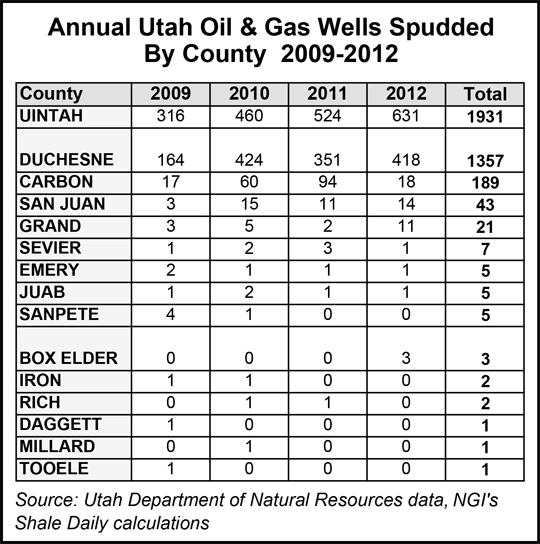 The BLM last June approved a plan for exploration and production company Gasco to drill nearly 1,300 wells in the basin over 15 years (see Shale Daily, June 20, 2012). But environmental groups charged that BLM’s approval violated the National Environmental Policy Act (NEPA) because it “failed to do a complete analysis of the the environmental issues.”

Sharon Buccino, a director at the Natural Resources Defense Council (NRDC), said the lawsuit seeks to invalidate the BLM’s decision until the defendants are “in compliance with NEPA.” Her group is seeking to replace the BLM-approved plan with an “Alternative E”, which would reduce the amount of drilling, roads, pipelines and acreage disturbed.

Buccino indicated that the environmental groups were willing to accept Alternative E. “We believe there’s a solution that’s win-win and that’s what we hope to get out of this lawsuit,” she said. The environmental groups negotiated directly with Gasco, but could not come to an agreement, according to Buccino. The main disagreement was over drilling in a part of the region known as Desolation Canyon.

“The Crux of the issue is that 215 of those wells [approved by the BLM] would occur inside the Desolation Canyon proposed wilderness area — a wild land defined by its incomparable river canyons and unspoiled scenic vistas,” wrote the NRDC’s senior lands analyst, Bobby McEnaney, on the organization’s staff blog. “An alternative existed, proposed by the Environmental Protection Agency, which would have allowed Gasco to drill on nearly 200,000 acres of lands, but avoids the handful of acres identified as wilderness,” he continued.

According to the lawsuit, the drilling area consists of about 40,000 acres that BLM has determined to be “wilderness caliber,” contains several endangered species and suffers from some of the highest levels of ozone pollution in the country. “In this part of Utah at times the air quality has been worse than what’s found in Houston or L.A. on a bad day,” Buccino told NGI.

Alternative E was not selected because “it would have precluded exploration and development on valid existing leases in areas where wilderness characteristics have been identified and would therefore not meet the purpose and need of the project,” BLM’s decision stated.

“As the BLM’s decision shows, and as underscored by the Environmental Protection Agency’s endorsement of the Final [environmental impact statement], Gasco has demonstrated its ability to meet the strict federal regulatory requirements of multiple agencies that reviewed the company’s proposal over eight years. We are confident the BLM’s decision will withstand this legal challenge and look forward to responsibly developing these resources for the benefit of American consumers,” said Gasco CEO King Grant.

The project area approved by BLM is in the two most active oil and gas locations in Utah: Uintah and Duchesne counties. A total of 1,931 oil and gas wells were spud in Uintah and 1,357 in Duchesne in 2009-2012, according to Utah Department of Natural Resources data. Carbon County (189) is the only other county in the state with more than 100 wells spud during that time.

Besides the NRDC, the environmental groups involved are Southern Utah Wilderness Alliance, Sierra Club, and the Wilderness Society.