With flaring an issue in North Dakota’s Bakken and other shale plays, emerging technologies, such as those from New Jersey-based Primus Green Energy Inc., offer the potential for operators to turn associated natural gas production into commercially viable liquid products, including gasoline and methanol. 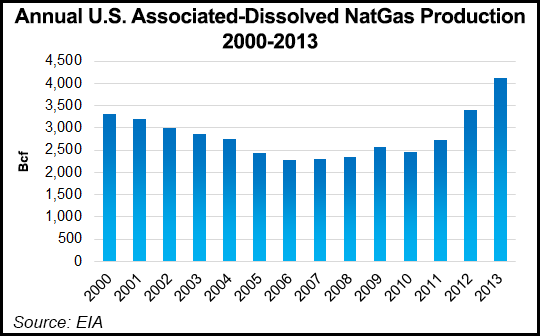 Primus’ George Boyajian, vice president for business development, touted North American shale plays as a ready market for his company’s STG+ technology, for which there is a commercial-scale demonstration plant at its New Jersey headquarters and several other projects in the development stage in the United States and overseas.

During a webinar, Boyajian and his colleagues said residual gas from natural gas liquids (NGL) processing and associated natural gas found in oil production are the two principal feedstocks for the company’s process.

“Because most of them do have associated gas, the North American shale plays are a good market for our technology,” Boyajian said. “Either the shale plays are straight gas plays, or it is stranded gas in the Marcellus where some operators can’t get their gas to market, and this technology provides a great way to monetize that gas in the Marcellus.”

Boyajian said there is also excess ethane in certain areas of the Marcellus that cannot be monetized currently where a Primus unit would work well. He added that in the Bakken, where associated gas and NGLs are being produced along with oil, his company’s technology would fit in well.

“We’re seeing interest in all the shale areas, including the Eagle Ford, as well as up in Canada, including the tar sands region,” said Boyajian, adding that he is seeking interest around the world, but in North America wherever there is stranded or associated gas “there is a great opportunity.”

In the Bakken, there can be quite a bit of variability among individual wells in terms of the content of the associated gas, but the Primus unit can use source gas from multiple wells, Boyajian said. “At times we can substitute the NGLs as feedstock instead of the gas.”

Primus’ modular plants can be built in various sizes, but the ideal one so far developed uses about 5 MMcf/d of associated or some other gas supply to produce 500 bbl of gasoline/d or that equivalent of methanol. The technology also can produce diluent, a crude thinner.