Canadian natural gas exports to the United States fell to the lowest level in 19 years during 2013, according to the latest trade scorecard kept by the U.S. Department of Energy (DOE). 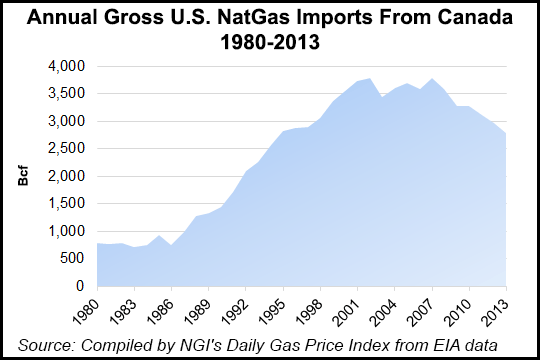 Pipeline deliveries south from Canada slipped last year to 2.868 Tcf, according to the newly released full-year count by DOE’s natural gas regulatory activities division, which grants trade permits and monitors use of them.

The trade record shows a trend that has reversed a pattern of rising Canadian export sales and shares of the U.S. gas market for two decades after the onset of North American free trade in energy in 1985. Canadian deliveries into the United States declined for five of the past six years. At the same time, U.S. exports to Canada — primarily into the most populous provinces, Ontario and Quebec — nearly doubled to 911 Bcf in 2013 from 485 Bcf in 2007.

Reliance of U.S. gas consumers on foreign supplies has shrunk drastically due to combined effects of rising U.S. output and the Canadian retreat from the continental market, according to DOE.

Although pipeline links with Mexico and overseas movements of liquefied natural gas (LNG) have played supporting roles, traffic between Canada and the United States dwarfs all other aspects of the North American gas trade, according to DOE.

“Imports from Canada have grown substantially from the 1980s, reaching an approximate plateau at about the turn of the century, and trending downward since the peak in 2007,” DOE said. “The 2013 import volume was the smallest since 1995. The decline in imports is consistent with the recent increase in U.S. gas production.”

The gas trade slowed in all directions, north and south, across the Canada-U.S. border last year. The rate of deceleration was about the same for Canadian and U.S. gas merchants alike. A 6.2% drop in U.S. deliveries into Canada, down to 911 Bcf in 2013 from 970.1 Bcf in 2012, matched the 5.9% drop in Canadian pipeline exports over the same period.

But improving prices more than offset the slippage in sales volumes for both sides of the trade.

U.S. exports go into the highest-priced Canadian markets in Ontario and Quebec. Canadian exports go to a wider range of destinations across the continent, with more variable prices.

U.S. merchants also made up for the slowed pace in gas traffic across the Canadian border with a brisk increase in the smaller trade with Mexico.

For the second consecutive year, North American participation in the global LNG trade stayed at negligible levels last year compared to the mainstream traffic on the pipeline grid linking the United States, Canada and Mexico.