The number of natural gas-fired peaking plants in California has increased sharply, to 79 from 24, in the first 15 years of this century, though none have been opened in recent years as the state increasingly moves to phase out fossil fuels to facilitate decarbonization. 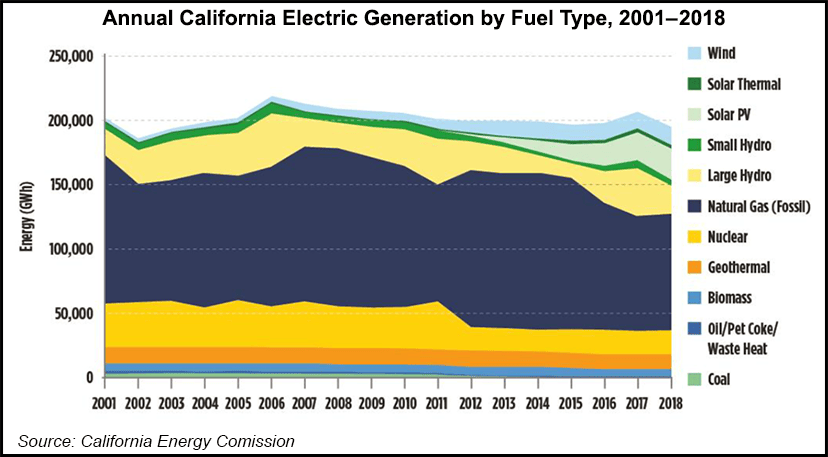 That trend is a reflection of one of the key findings in the California Energy Commission’s (CEC) current Integrated Energy Policy Report (IEPR), which found that “the transition to cleaner energy sources will result in declining fossil natural gas consumption over the next few decades.”

California has long relied on gas-fired simple-cycle peaking plants on short notice to meet peak demand loads for a few hours in the 15-minute and 5-minute-ahead real-time market. In more recent years, the peakers have included load-following plants, such as the Panoche Energy Center, the nation’s largest peaking facility with four 100 MW units designed to ramp up and follow load in 9.5 minutes.

Of the 67 currently operating generation plants listed on the CEC website, 21 are simple-cycle peaking plants, six are baseload solar projects and one is a new geothermal project. The CEC also lists eight generation projects under review, seven of which are peaking projects. Almost all of these projects are natural gas-fired, cogeneration or diesel-powered back-up generation.

Last month, the state’s grid operator, the California Independent System Operator (CAISO), connected with what it called the largest battery storage resource in the nation, signaling “an era of rapid battery growth for CAISO.” The grid operator has hooked up to the initial phase of LS Power Group’s Gateway Energy Project in San Diego, adding 62.5 MW to its now total of 216 MW of battery storage capacity.

Ward said that the CEC in recent years has tracked “dramatic declines” in the price of storage, making it more cost-effective compared to gas-fired generation. “Storage, either standing alone or accompanied by solar is increasingly being considered or deployed by utilities in the state to integrate solar and wind resources,” he said.

In 2018, then-Gov. Jerry Brown signed into law Senate Bill (SB) 100, which established a far-reaching policy requiring renewable energy and zero-carbon resources to supply 100% of electric retail sales to customers by 2045.