The Electric Power Suppliers Association (EPSA), which overwhelmingly represents independent natural gas-fired electricity generators across the country, has petitioned the U.S. Supreme Court to hear its challenge against subsidies for nuclear power plants in New York and Illinois. 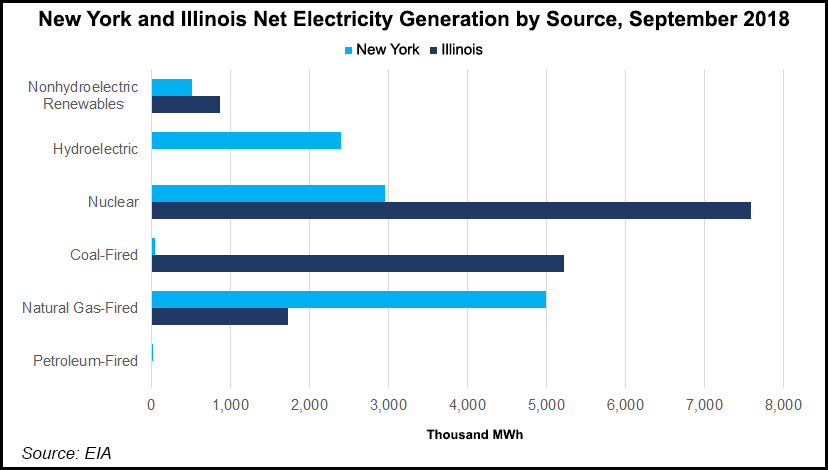 Lower courts in both states have upheld zero emission credit (ZEC) programs adopted two years ago to prop-up five nuclear facilities owned by Exelon Corp. The courts found that challenges brought by the EPSA and others failed to show how the subsidies are preempted by federal law or how they depress energy prices and put gas-fired facilities at a competitive disadvantage.

“EPSA strongly believes that such state subsidy schemes pose an existential threat to the proper functioning of the wholesale power markets on which millions depend for their electricity,” said CEO John Shelk in announcing the petitions this week.

Similar legislation has been enacted in New Jersey and Connecticut, while a debate over subsidies for the nuclear power sector continues in other statehouses like those in Ohio and Pennsylvania. A major sticking point, at least as far as EPSA is concerned, is FERC’s jurisdiction over interstate wholesale electricity markets under the Federal Power Act (FPA), specifically the Commission’s oversight of auctions to purchase wholesale electricity.

The state subsidy programs, EPSA argues, unlawfully interfere with that jurisdiction and are therefore preempted by federal law. The organization noted that the high court’s ruling in 2016 in Hughes v. Talen Energy Marketing LLC found a similar Maryland subsidy program was preempted by the FPA. That decision, EPSA argues, has been too narrowly interpreted by the lower courts.

In the Seventh Circuit case, however, the Federal Energy Regulatory Commission filed a brief concluding that the Illinois ZEC program does not interfere with interstate auctions and does not preempt federal laws. The Seventh Circuit leaned heavily on FERC’s position in upholding Illinois subsidies.

But FERC is currently exploring the issue in its own closely watched proceeding involving PJM Interconnection and the grid operator’s efforts to better accommodate state subsidies. FERC has acknowledged in that instance the wholesale market is threatened by subsidies.

“EPSA filed these petitions for review so that the Supreme Court will have the final say on such an important question of federal versus state jurisdiction over a matter as central to the nation’s well being as electricity,” Shelk said.

Wholesale electricity prices are determined by auctions. Generation resources offer in a price at which they can supply a specific number of MW hours of power. A resource clears the market and contributes generation when it submits a successful bid in an auction. The cheapest resource will clear the market first, followed by the next cheapest and so on until demand is met.

Utilities or power producers that generate with coal or natural gas are required to purchase a certain number of credits from nuclear facilities that produce zero-emissions electricity. Under the ZEC programs, subsidized nuclear generators receive the value of their credits in addition to what they earn in the wholesale markets. Opponents argue that this allows them to bid below cost during auctions.

But low-cost gas supplies have flooded the market, along with an increasing share of renewable energy, providing stiff competition for both coal and nuclear facilities. Lawmakers have advanced subsidies for nuclear facilities to better value their low emissions and resilient generation.