U.S. natural gas-fired power generation fell 14% in October from the year-ago month due to lower electricity demand and more power from renewable and nuclear sources, according to Genscape Inc. Surprisingly, the decline in gas-fired generation occurred even though a significant number of coal-fired plants were offline during the month. 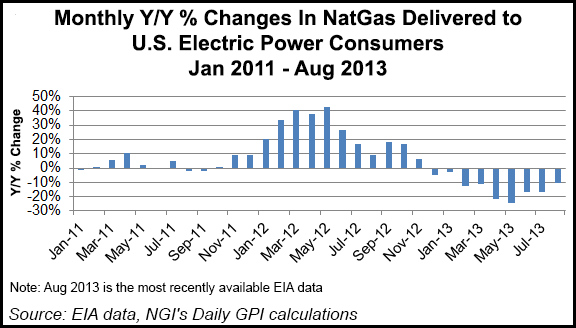 The research and data analysis firm said electricity demand scaled back during October to April 2013 levels with a quicker decline of cooling load in California and Arizona, which experienced cooler than normal conditions during October. However, warmer than normal temperatures in the PJM and MISO regions kept the demand in those areas within shoulder season range and prevented early heating load events.

According to data from the Energy Information Administration, which is only updated through August, gas demand for U.S. power generation has been lower every month this year compared to the corresponding month of 2012. The peak occurred in May, when there was a 25% reduction in demand from May 2012.

Genscape highlighted the fact that renewable generation increases are moving the segment into a major role in power generation. In 4Q2012, 8,380 MW of wind power was added to the grid as projects rushed to take advantage of the expiring federal renewable electricity production tax credits, Genscape said, adding that areas such as the Electric Reliability Council of Texas (ERCOT) and California Independent System Operator over the last year have continued to see tremendous growth in wind capacity. The country’s wind power sources have also benefited from favorable weather patterns with persistently strong southerly wind flow, and the near 500 MW year-over-year increase in installed capacity helped drive ERCOT’s wind generation up 9% in October.

Genscape’s proprietary monitors showed 40 plant outages by the last week of October, which was the highest number of monitored outages seen year-to-date. The outage at the 2 GW Monticello unit in East Texas, one of the many outages Genscape detected in October, helped spark a 14% uptick in gas-fired generation in the south to end the month.

While gas consumption for electricity generation was down for October, a recent General Electric Corp. (GE) white paper painted a bullish future for overall natural gas usage (see Daily GPI, Oct. 21). In part due to increased gas demand for electricity generation, the GE report projected that global gas consumption will grow by 36% between now and 2025, increasing gas to 26% of global energy consumption. GE’s white paper characterizes current global gas demand at 3,500 billion cubic meters (bcm) annually, or about 70% of today’s global oil market. The projection is for gas to hit 4,800 bcm annually in 2025.

Thanks to emissions regulations, more utilities are turning from coal to gas to fuel their power generation fleets. Although the handwriting has been on the wall for several years now (see Daily GPI, Aug. 30, 2011; July 1, 2011), the momentum in Utah for accelerating the switch from coal- to gas-fired electric generation picked up last month (see Daily GPI, Oct. 24).

Officials at the huge public-sector Intermountain Power Project (IPP) near Delta, UT, told reporters recently that they intend to transform their nearly 2,000 MW coal units to run on gas by 2025-2027, when major contracts with the Los Angeles Department of Water and Power (LADWP) and other public-sector utilities in Southern California expire. LADWP is hoping to end its use of coal-fired power by 2025 (see Daily GPI, April 19).