The U.S. rig count increased five units to 378 for the week ending Friday (Jan. 22), with gains distributed across both oil- and natural gas-focused drilling, according to the latest figures from oilfield services provider Baker Hughes Co. (BKR). 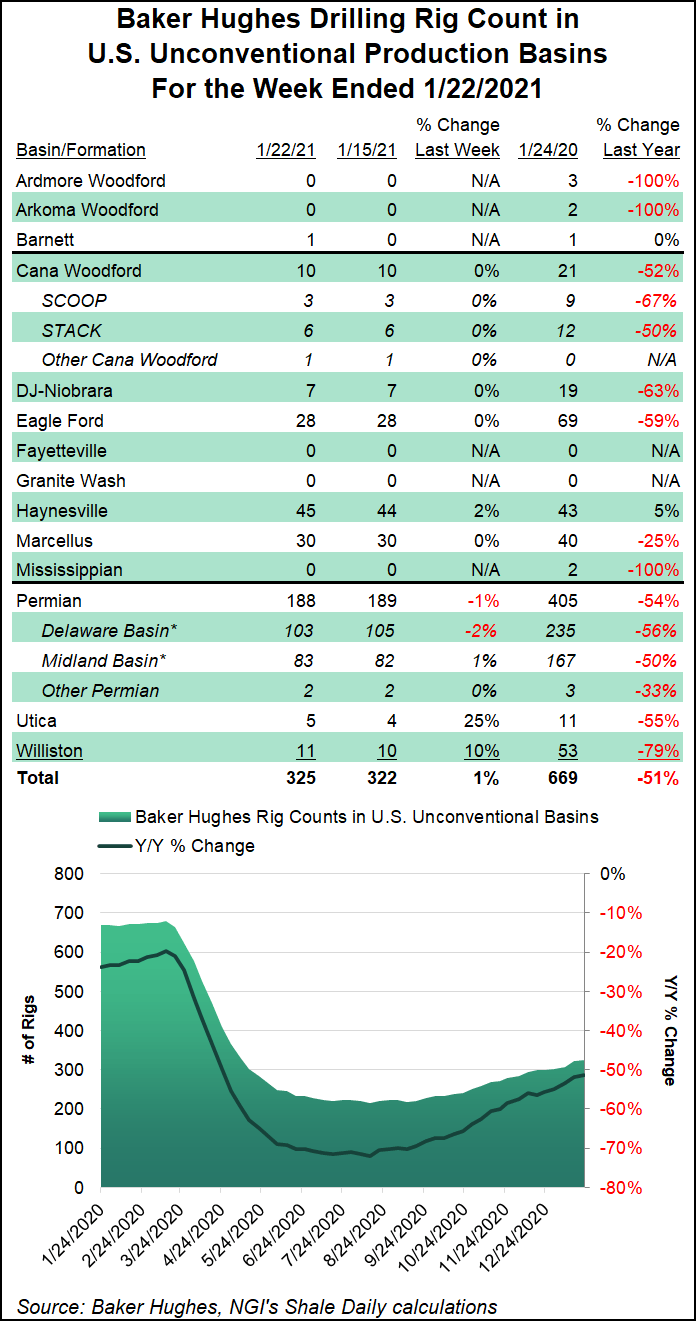 The United States saw a net increase of three natural gas-directed rigs, along with two oil-directed rigs for the period, leaving the combined domestic tally still 416 rigs behind the 794 rigs active at this time last year, according to the BKR. The figures are based in part on data provided by Enverus.

Still, the domestic drilling total has climbed steadily over the past several months after dropping to 244 last August.

Domestic land drilling increased by five units for the most recent week, while the Gulf of Mexico tally remained unchanged at 16. Horizontal units increased by six, offsetting a decline of one vertical unit.

In Canada, 11 rigs were added for the week, including six oil-directed and five natural gas-directed units. The Canadian rig count finished the week down 72 units from 244 units active a year ago.

The North American rig count ended the week at 550, down from 1,038 at this time last year.

There were no major changes among plays during the week, according to BKR. The Permian Basin saw a net decline of one rig week/week to fall to 188, down from 405 a year ago. On the other side of the ledger, several plays increased their respective totals by one rig for the week, including the Barnett, Haynesville and Utica shales, as well as the Williston Basin.

Broken down by state, New Mexico saw a net decline of five rigs, while Texas added six to its total. Alaska added two rigs, while North Dakota, Ohio and West Virginia each added one.

The number of North American oil and natural gas producers filing for bankruptcy protection continued to slow in December, according to updated data published recently by Haynes and Boone LLP.

The law firm’s latest Oil Patch Bankruptcy Monitor showed that since the oil and gas industry began contracting in late 2014, 2020 was the worst year for bankruptcies. Forty-six exploration and production  companies representing around $53 billion in total debt filed for bankruptcy protection last year. This is around 30% of the total debt represented in bankruptcy filings since 2015, the first year Haynes and Boone began tracking data.

“While rising North American activity levels drove higher revenues in the U.S. for our shorter-cycle businesses, international markets and demand for capital equipment remained soft through year-end, which led to fourth quarter results that were below our expectations for our three segments,” said CEO Clay Williams.