Natural gas for delivery on Friday fell hard and often in Thursday’s physical trading as declines of over a quarter at Northeast points paced the trek lower. Futures bulls had to put up with a storage report showing a 74 Bcf build, just a couple of Bcf higher than expectations, but that was enough to put quotes in a free fall. At the close, June had fallen 16.8 cents to $4.572 and July was down 17.1 cents to $4.583. June crude oil skidded 51 cents to $100.26/bbl. 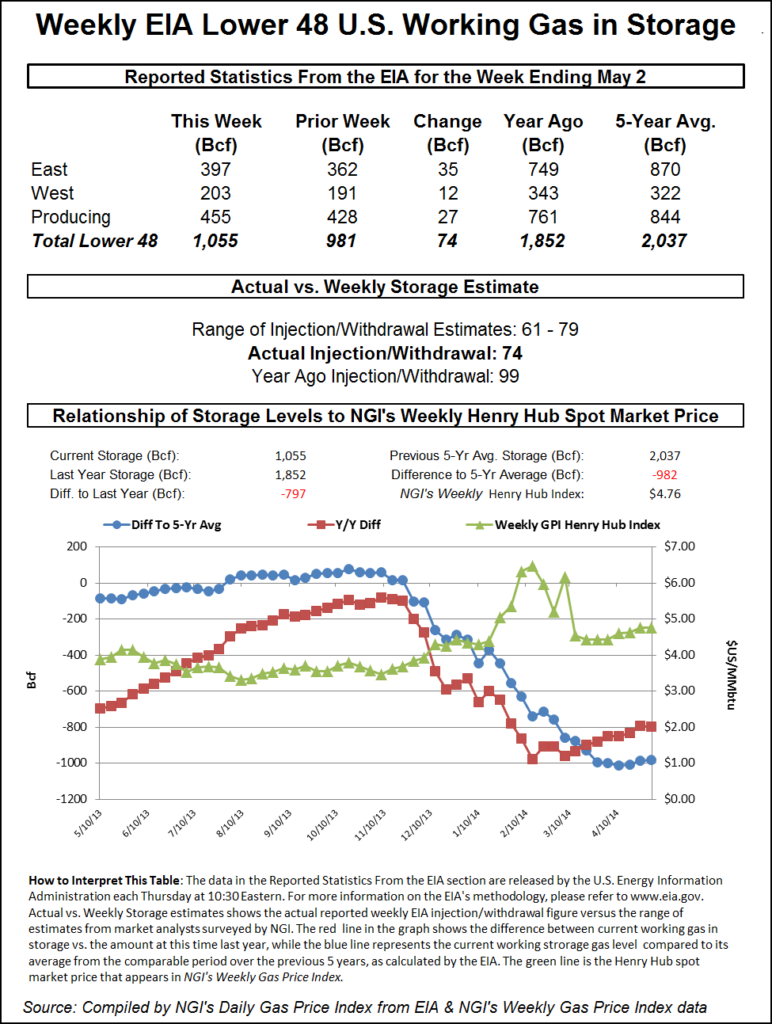 Next-day prices in the Midwest and Great Lakes skidded as temperatures were forecast to drop sharply going into the weekend. Forecaster AccuWeather.com predicted that Thursday’s high of 83 degrees in Chicago would drop to 72 on Friday and Saturday, about in line with the seasonal average of 68. Milwaukee’s high Thursday of 78 was seen sliding to 69 Friday and to 66 on Saturday; the normal high is 62. Detroit’s high of 79 Thursday was expected to ease to 75 Friday and 72 on Saturday. The seasonal high in the Motor City is 68.

“Along with 80 F temperatures, thunderstorms will roll into the region on Thursday night and could halt gameplay” in the series finale between crosstown clubs the Chicago Cubs and the White Sox. “Temperatures will drop nearly 10 degrees for Friday, sinking to the low 70s. Thunderstorms, breezy winds and clouds will persist in the city through the afternoon, but storms will move out of the area by Friday night.”

“Overnight temperatures Friday and Saturday nights will hover around the 55 F mark for the first day of the weekend, the sun will return for parts of the afternoon Saturday, but thunderstorms will come back to Chicago for Saturday evening.”

A Michigan marketer noted that temperature forecasts had moderated and “there was a point last week where you didn’t see a temperature of 70 degrees, but now we are seeing a lot more 70s. It kind of feels like what April should have been.

“We paid $4.84 and $4.88 for gas today on Consumers, which is below our $4.95 index price. Based on what happened in [Thursday’s] trading, we should be looking at good prices for the weekend,” he said.

Northeast points led the charge lower. At the Algonquin Citygates, Friday packages were seen at $4.16, down 27 cents, while parcels into Iroquois Waddington dropped 23 cents to $4.62. Gas on Tennessee Zone 6 200 L fell 34 cents to $4.16.

The Energy Information Administration’s (EIA) storage report Thursday caught the bulls off guard. “We had heard anywhere from 65-72 Bcf injection, so it was clearly a bearish number,” said a New York floor trader. He noted that longer term, the issue of storage refill was still the 800-pound gorilla in the room, and “I think you have to look for a spot to buy this thing.”

Tim Evans of Citi Futures Perspective said “it was also a clear step up from our model’s 62 Bcf forecast, implying a weakening of the underlying supply/demand balance that could carry over into somewhat larger injections going forward.”

Going in to the report, traders had expected an injection in the low 70 Bcf range with little in the way of surprises expected. Houston-based IAF Advisors calculated an increase of 71 Bcf and industry consultant Bentek Energy saw a 66 Bcf build. A Reuters survey of 24 traders and analysts resulted in an average 71 Bcf addition with a range of 61 Bcf to 79 Bcf.

Bentek noted that “Demand increased from the previous week by 1.1 Bcf/d, which was largely centered in the Producing Region from an increase in power burn demand. Bentek estimates that power burn demand rose 1.2 Bcf/d within the region. The increased demand was reflected in Bentek’s sample of deliveries to power plants, which rose to their highest levels since the Feb. 13 storage week and averaged 6.9 Bcf/d during the week.”

The report “is looking very much like the advertised sample of low 70’s,” said John Sodergreen, editor of Energy Metro Desk (EMD). “Nothing we saw this week points to a surprise, but, then again, so far this year, those weeks which don’t produce a surprise report (5 Bcf-plus than the EIA report) are now the exception. Nonetheless, 70-75 Bcf should be right on the money this week; last week’s true up should suffice for the time being…Next week we may possibly see our first three-digit build — not soon enough as far as we’re concerned.” The EMD survey came in at 72 Bcf.

Inventories now stand at 1,055 Bcf and are 797 Bcf less than last year and 982 Bcf below the 5-year average. In the East Region 35 Bcf were injected and the West Region saw inventories up by 12 Bcf. Inventories in the Producing Region rose by 27 Bcf.

The Producing region salt cavern storage figure increased by 9 Bcf from the previous week to 113 Bcf, while the non-salt cavern figure rose by 18 Bcf to 342 Bcf.