Combating Tuesday’s 54.9-cent bounce to the upside, natural gas futures traders on Wednesday took almost all of it back as fundamentals still remain overwhelmingly bearish. March natural gas closed 44.8 cents lower on Wednesday at $7.283 as traders prepared for the virtual logjam of market-impacting events scheduled in the final days of the week.

In addition to the natural gas storage report Thursday morning, traders are also monitoring the petroleum inventory reports and March options expiration. On Friday, the March futures contract goes off the board.

Commenting on the busy finish to the week, ICAP Energy broker Brad Florer said he doesn’t see anything in the near future — minus an oil spike — that could turn natural gas around to the upside.

“I have no idea why people were buying this stuff [natural gas] on Tuesday,” Florer said. “I got the feeling towards the end of the day that it was more than just short-covering, but I think some of that was people exercising stops in order to take some profit. I really don’t know what natgas traders are looking at. We are clearly oversold, but Tuesday’s action was the first decent bounce we have had in weeks, which was overdue. However, we came right back Wednesday and took the increase out.”

Florer said for now, the only thing gas bulls can hang their hat on is the crude market and its unstable situation due to unrest in Nigeria and Iran In its first day as prompt month Wednesday, April crude dropped $1.73 to close at $61.01/bbl.

“In my view, the only thing remotely bullish for natural gas is the potential for a blow-up in crude,” he said. “I think we really have been following crude futures for the last two days, almost tick for tick. If you are a bull, what you are holding on to is the idea that we are going to follow crude and that crude will continue to run as things continue to be messy in the Middle East.

“Natural gas futures are diverged about as far as the market likes to get from the crude contract,” Florer said, noting that natural gas currently sits about $3.23 below crude on an MMBtu basis. “Historically, that is about as wide as that spread likes to stretch. There are some people who think that dynamics are going to get to a spot where that spread will be disregarded because there is just too much gas in the ground. If that occurs, then we will see that spread blow out even further.”

Florer said if people are long natural gas, there is some reason to be optimistic, but it is a tough spot to be in right now because upside momentum could be tough to find. “The chart looks bearish, storage looks bearish and spring is right around the corner,” he said. “I think if you are bullish you have to start looking at the summer and hoping it gets hot and a hurricane shows up, but that won’t bail you out for five months.”

Short-term traders see more short-covering ahead as traders prepare for the termination of the March contract on Friday. “It’s just a question of — there are a lot of shorts in the market and they have to cover. All those buy orders that were hanging below $7, preventing the market from falling, moved into the market. It looks like there is more of this to come for the next couple of days,” suggested a New York floor trader. “I don’t see why the market can’t get to $8 or $8.10 on short-covering. The market is fundamentally weak, but we’ve got to get these shorts out of the way.”

Forecasted cold for much of the country could put a little spring in the step of bulls. The National Weather Service (NWS) forecasts that for the week ended Feb. 25, the populous energy markets of the industrial Midwest and Mid-Atlantic may see above average accumulations of heating degree days (HDD). The NWS predicts that Wisconsin, Illinois, Indiana, Michigan and Ohio will shiver under 263 HDD, or 18 more than normal, and New York, New Jersey, and Pennsylvania will endure 268 HDD, or 18 more than normal. For the seasonal tally that began on July 1, 2005 the Midwest has experienced 3,850 HDD, or 634 less than normal, and the Mid-Atlantic 3,389 HDD, or 612 fewer than normal.

Looking at the Energy Information Administration’s natural gas storage report for the week ended Feb. 17, Florer said he thinks the market is looking for a withdrawal around 130 Bcf. However, he questions the report’s worth. “I am not sure how important the report becomes at this point in the season with the current levels in underground stores.”

According to a Reuters survey of 18 industry players, an average of 120 Bcf was expected to be withdrawn when the EIA releases its report at 10:30 a.m. EST. Golden, CO-based Bentek Energy is projecting a storage withdrawal of 134 Bcf, resulting in 2,132 Bcf of gas in storage. “This level is 47.1% above the five-year average and 5.8% above the five-year high,” the company said. Breaking down its expected withdrawal by regions, Bentek said it expects the East region to remove 77 Bcf, while the Producing and West regions will withdraw 41 Bcf and 16 Bcf, respectively.

Wednesday afternoon’s ICAP-Nymex storage options auction, which allows traders to hedge against or bet on the storage number, zeroed in on a 130 Bcf withdrawal for the week. The number revealed Thursday morning will be compared to last year’s 89 Bcf withdrawal and the five-year average pull of 126 Bcf. 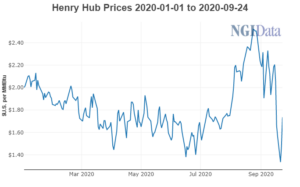