Physical gas for Friday delivery plunged at all market points in Thursday’s trading with losses ranging from about a quarter to multiple dollars. 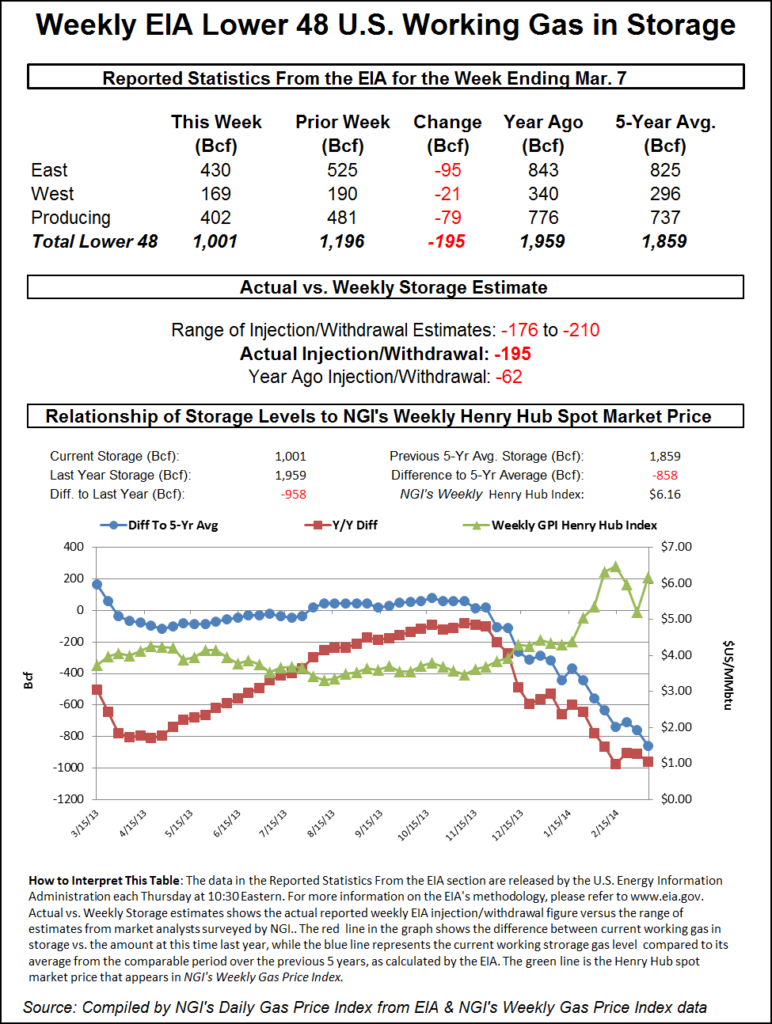 Particularly hard hit were New England locations and eastern points, which saw multi-dollar drops as a warming trend was forecast that would raise high temperatures by 25 degrees by Friday.

The Energy Information Administration (EIA) reported a withdrawal from storage of 195 Bcf, about what the market was looking for, but traders turned their attention to upcoming milder weather as well as a healthy refill season, and prices dropped. At the close April was down 10.7 cents to $4.383 and May had retreated 8.6 cents to $4.355. April crude oil rose 21 cents to $98.20/bbl.

The 195 Bcf withdrawal reported by the EIA has traders and analysts looking ahead to estimate whether the industry can recover from such a brutal winter and refill storage (see related story). “The problem, as we see it, is that the market is failing to account for the fact that the rapid system-wide destocking has fundamentally altered the outlook for supply/demand balances,” said Teri Viswanath, commodities strategist at BNP Paribas.

“Looking ahead, we expect conditions will remain tight as production gains fall short of exuberant market expectations. Despite the industry’s best efforts to bring additional supplies to market, we believe that it will take more than a single injection season to swing the market back into equilibrium.”

“The forecasted April-to-October storage build of nearly 2,500 Bcf would surpass the previous record injection season net inventory build (April-October, 2001) by more than 90 Bcf, to end the injection season at 3,459 Bcf. While the projected storage build for the upcoming injection season would be a record, total Lower 48 end-October inventories in 2014 would still be at their lowest level since 2008. High injections would not fully erase the deficit in storage volumes caused by this winter’s heavy withdrawals,” STEO said.

A Denver producer is also looking for a robust refill season. “If you reduce the storage deficit relative to last year and the five-year averages, prices are going to come down regardless of what the absolute price is. There is at least 30 years of history to prove that.”

Bentek Energy argued that storage refill is not likely to match the 2.5 Tcf injected in 2003 when storage bottomed at 642 Bcf. According to Bentek, that was the lowest level on record. “During that year, the U.S. set its all-time injection record by putting more than 2.5 Tcf into the ground during the summer,” Bentek said. “To reach 2013’s end-of-season total, the U.S. would have to inject more than 2.8 Tcf [93 Bcf weekly] during the summer. But is that possible?

“A look at average weekly injections by EIA region since 1994 suggests that injecting 2.8 Tcf during the summer is unlikely. Assuming a 30-week injection season, the maximum observed injection rate within the U.S. is 85 Bcf/week, while the country has failed to break the 80 Bcf/week mark since setting the record in 2003. Historically, the East has posted average weekly injections as high as 54 Bcf/week, while the West and Producing [regions] have topped out at 10 Bcf/week and 24 Bcf/week, respectively.”

In the physical markets milder temperatures throughout New England and the East Coast were expected to push the 60 degree mark by the weekend and next-day gas prices behaved accordingly. AccuWeather.com predicted that Thursday’s high in Boston of 25 would climb to 39 Friday and 50 by Saturday. The normal high in Boston this time of year is 45. New York City’s high reading Thursday of 28 was seen jumping to 49 Friday and 57 on Saturday. The normal high in New York in mid March is 49. Baltimore’s Thursday high of 36 was predicted to jump to 58 Friday and reach a comfortable 63 on Saturday.

The National Weather Service in Baltimore and Washington, DC, was looking for not only milder temperatures, but also active weather patterns. “A very strong low-pressure center and its associated cold front will pass through the Middle-Atlantic States by this evening [Thursday]. An upper-level trough will move across the area tonight…then Canadian high pressure will build through Thursday night and move off the coast Friday. Another weak disturbance moves through to start the weekend. For the second half of the weekend…high pressure will build over the Great Lakes while another upper disturbance passes through the Mid-Atlantic.”

Gas at Appalachian and Marcellus points also weakened. Transco Leidy Friday packages fell 66 cents to $3.44, and deliveries to Tennessee Zone 4 Marcellus skidded 77 cents to $2.62. On Dominion, gas for Friday delivery was off 62 cents to $4.02, and parcels on Columbia TCO lost 35 cents to $4.38.

Forecasters see a modest warming trend setting in. In its Thursday morning six- to 10-day outlook WSI Corp. said, “Today’s forecast has trended warmer over most of the Midwest and East, especially on days six-eight. Confidence is a bit lower today as uncertainty develops with respect to the track/intensity of a storm system next week.

“Ensemble members show a wide distribution of possible storm scenarios next week, with many now suggesting a more amplified, stronger track up through the Great Lakes, which would result in a one- to two-day period of above normal temps for the lower Midwest and East if correct.”

The 10:30 a.m. EDT release of EIA storage data was able to seal the deal with the highest rate of March withdrawals ever. Last year 145 Bcf was pulled, and the five-year average stands at 95 Bcf. Houston-based IAF Advisors calculated a 203 Bcf pull, and a Reuters survey of 21 traders and industry cognoscenti revealed an average 196 Bcf with a range of 176 Bcf to 210 Bcf. Ritterbusch and Associates predicted a withdrawal of 190 Bcf.

The EIA storage report was not enough to satisfy the bulls, and traders were back at the drawing board trying to determine new support and resistance levels. “$4.50 was the initial support, but that is now resistance since the high on the day is $4.496, and support underneath is going to be $4.35,” said a New York floor trader.

Others see speculative longs exiting the market. “The 195 Bcf net withdrawal from storage was somewhat less than the consensus expectation, but was still quite bullish compared with the 93 Bcf five-year average for the date,” said Tim Evans of Citi Futures Perspective. “However, the absence of a bullish surprise seems to be enough to allow the flow of speculative long liquidation to continue.”

Inventories now stand at 1,001 Bcf and are 958 Bcf less than last year and 858 Bcf below the 5-year average. In the East Region 95 Bcf were withdrawn and in the West Region 21 Bcf were pulled. Inventories in the Producing Region fell by 79 Bcf.

The Producing region salt cavern storage figure decreased by 34 Bcf from the previous week to 54 Bcf, while the non-salt cavern figure fell by 45 Bcf to 348 Bcf.

As the latest forecasts moderated somewhat on expected heat, and as analysts continued to mull balances following the latest government storage data, natural gas futures were trading close to even early Friday. Coming off a 4.5-cent sell-off in Thursday’s session, the August Nymex contract was up 1.5 cents to $1.794/MMBtu at around 8:40 a.m. ET.…