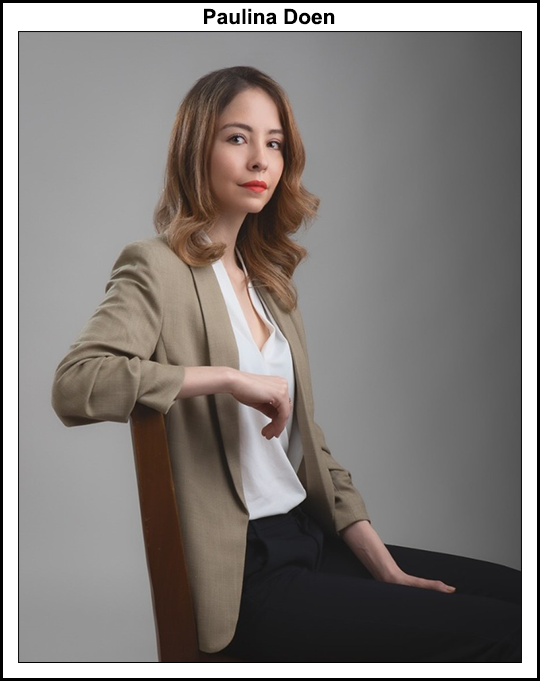 “At the same time, given that both CFE and Pemex use the Sistrangas system, the open seasons could be favorable in that they would expand the system, which could allow for more private participation,” she said.

Doen is an energy and regulatory lawyer at the legal consulting firm Sánchez DeVanny in Mexico City, where she has worked as an associate since 2021.

Previously, Doen worked as in-house counsel in the contracts department in the legal affairs office at Centro Nacional de Control del Gas Natural (Cenagas) from Feb. 2020 to May 2021. Before that she worked at Chicago-based law firm Baker McKenzie where she focused on energy, mining and infrastructure law, as well as in international business and trade law. She is also a member of the Women’s Energy Network in Mexico.

NGI: What is currently the most important challenge in the natural gas sector in Mexico?

Doen: It’s difficult to point to just one, though I would start by saying that, without question, the dependence we have on external sources for natural gas is an important issue as it subjects the Mexican economy to what happens outside of our country. Though imported natural gas is usually cheaper, when there is a shortage or an increase in price for whatever reason, Mexico is left without natural gas and/or to pay inflated prices.

Also, because we haven’t developed enough storage infrastructure, buying natural gas today at competitive prices for later use is currently not an option. Furthermore, natural gas in its gaseous state that is transported through pipelines cannot not be used or taken off without affecting Sistrangas system parameters. This is a different case with liquefied natural gas (LNG), which could solve the problem. However, the use of natural gas as LNG requires significant investments and is more expensive than natural gas transported via pipelines.

It’s important to remember that natural gas is considered a “transition” fuel, meaning that it’s a temporary solution to our energy needs as we aim to become “totally clean.” While natural gas is not 100% environmentally friendly, it’s not as polluting as other fossil fuel sources.

However, to achieve the ultimate goal we strive for in terms of energy generation – which is to reduce emissions into the atmosphere – a longer term plan is required. Currently, a significant percentage of the power generation plants in Mexico are fueled by natural gas, which powers the turbines of combined cycle electricity generation plants.

NGI: What is your view on the resolution recently issued by the Comisión Reguladora de Energía (CRE) which modified certain legal provisions regarding natural gas transportation capacity in the Sistrangas system that CFE and Pemex once reserved for their operations?

Doen: As a result of this modification, the CRE changed the previous criteria and removed the limitation imposed on the CFE, allowing the company to use unused reserved capacity for marketing and sales purposes.

In the transport of natural gas via pipeline, unused capacity must be released and made available to others. The fact that the capacity that was assigned to the CFE — which was given preferential treatment over private companies — allows the company to use natural gas for commercial activities in addition to its original intended uses for the fuel, does appear intended to strengthen the market position of CFE in the sector. This could mean less capacity available for private companies.

NGI: What about plans for new open seasons to assign capacity on the Sistrangas system? Do you foresee any open season auctions being carried out any time soon?

Doen: To date, only one open season has been held to offer available capacity on the system, which was in 2016-2017. However, there were/are plans to hold future open seasons according to the current five-year expansion plan for the Sistrangas, which covers 2020-2024. According to the existing regulation, the plan is up for a second annual review this year. The current five-year plan includes a portfolio of projects, among them a 355-kilometer expansion of the system via new pipelines.

Progress in the implementation and/or changes to the five-year plan may be introduced during the second revision, which must be approved and published by the Energy Ministry (Sener) with information from Cenagas and that includes technical opinions from the CRE. However, it’s important to note that the national development plan of the current administration seeks to “rescue the energy sector” with respect to the CFE and Pemex. This could mean that future open seasons carried out could have the objective of benefiting the state-run energy companies. At the same time, given that both use the Sistrangas system, the open seasons could be favorable in that they would expand the system, which could allow for more private participation.

NGI: In recent years, there have been repeated plans and projects discussed to improve natural gas storage capacity, as well as to construct new pipelines in the Yucatan peninsula. Do you see any new projects in these areas being developed in the short term?

Doen: The current Cenagas five-year plan and annual revisions lay out the direction for  future plans of Sistrangas. Specifically, the previous plan considered a storage infrastructure project for natural gas in the country. However, the plan explains the use of salt caverns for operational storage that would benefit the country in terms of energy security. The plan states that the salt caverns would improve conditions for system users in that they “would be able to benefit by having an additional option different than LNG and at a lower cost.”

However, in the first review of the five-year plan published by Sener in Dec. 2021, point 2.2.8 sets forth that Sener and Cenagas would provide information regarding the advances of any storage project in the second revision of the plan scheduled for this year. Thus, it remains unclear the current status of the project.

If we look at other systems and not just Sistrangas, there are some plans for new natural gas storage projects. Several days ago, the CRE announced plans for an open season on its website which was launched by a private company seeking to allocate capacity for natural gas storage. The project offers storage capacity of LNG in maritime tanks to later undergo regasification, given that the project seeks to generate electricity using natural gas.

The interconnection of Sistrangas with the Yucatan peninsula advanced in a first phase with the construction of a small private natural gas pipeline that is a few kilometers in length. It is connected to an already existing natural gas pipeline — whose capacity is contracted by the CFE — with Sistrangas, which will allow the flow of natural gas from the north to the south of the country and hence boost productivity, social and economic development in the region. According to point 2.2.1 of the first revision of the five-year plan, the estimated start date for commercial operation for the Leona Vicario project was deferred until 2022. It will be interesting to see what Sener publishes regarding plans for this project in the second revision of the Five-Year Plan.

NGI: What is your opinion on the recent congressional vote on the Mexican electricity reform proposal and its impact on the future of the Mexican energy sector?

Doen: To answer this specific question, my colleague Tania Trejo, who is a lawyer specializing in the electricity sector, points out that the vote by the lower house on the constitutional reform initiative on electricity is favorable, considering such a legislative proposal would have implied a regression for the national energy industry.

Among other modifications, the initiative sought for the electricity sector value chain to become a strategic area that could only be implemented by the state, which would return us to the provisions of the Electric Power Public Service Law in 1991 and entirely end private participation in electricity generation and supply.

Additionally, to implement the modifications included in the initiative, all electricity generation permits and existing electricity purchase and sale contracts would have been canceled, which would likely have triggered a series of legal actions that would have led to significant economic implications for the country.

Tania also points out that the vote in the chamber of deputies last Sunday (April 17) does not necessarily imply that the Mexican energy sector is safe from being the subject of another modification proposal given that, since the beginning of the current administration, there have been multiple changes to regulation in the sector.