Because the Gulf Coast increasingly is the hub for natural gas exports and industrial demand, Hurricane Harvey may foretell what could occur in future natural disasters, according to Barclays Capital. 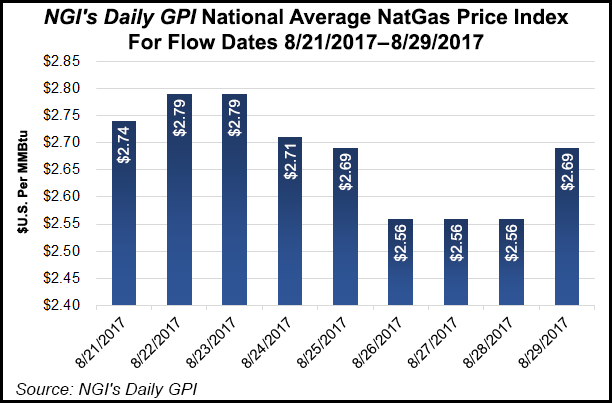 Harvey is the first major storm to hit the Gulf Coast energy hub since the unconventional oil and gas boom began, but it most certainly won’t be the last, said analysts Michael Cohen, Nicholas Potter and Warren Russell.

“Even with the improved resilience of energy facilities in the aftermath of the 2005/2008 hurricane seasons, the flooding and bottlenecks on the coast will preclude a quick return to normal for energy prices,” the trio said Tuesday.

Specifically for natural gas, the Barclays team doesn’t expect Harvey to have a significant impact on prices because supply outages “are counterbalanced by demand destruction (power outages), lower exports to Mexico and already diminishing cooling load as summer comes to a close.”

Overall, analysts expect to see a combination of demand destruction from Harvey with the start of shoulder season “as a bearish development on the margin for prices. We estimate that, compared to last week, on Aug. 28 (Monday) average total U.S. demand plus exports has fallen 3.5 Bcf/d, while production has only been affected by around 800 MMcf/d (closer to 2 Bcf/d at its high), suggesting additional surplus of around 2.7 Bcf/d.”

Depending on how long the outages last, it potentially could lead to a bearish inventory report for the week ending this Friday (Sept. 1), which would be released on Sept. 7.

The storm has also impacted the Eagle Ford Shale production, where gas output was down as much as 800 MMcf/d from its August levels of around 6.2 Bcf/d.

BHP Billiton Ltd., which shuttered output in South Texas last Friday, expected to partially ramp up again Monday in the western edge of the Eagle Ford in La Salle and McMullen counties. Operations in Dewitt and Karnes were to remain offline until the situation improved. Among others, Energy Transfer Product Partners LP also expected on Monday to begin to see the return of gas volumes from South Texas.

“The biggest hit to demand has occurred in the power sector, as outages in Texas and the Southeast have lowered overall power burn,” according to Barclays.

The U.S. Department of Energy (DOE) said as of Monday afternoon 292,704 Texas customers were without power, around 2.5% total, with another 2,582 Louisiana customers (less than 1% total) also off the grid.

“To compare, outages during Hurricane Katrina were around 2.6 million customers across five states,” said Barclays analysts. “Data show that power burn levels have fallen to around 28.6 Bcf/d, down 3.7 Bcf/d from last week.”

Power outages because of Harvey are being matched by generally milder weather, which has lowered power burn needs as September and the shoulder season approach.

Meanwhile, gas exports to Mexico “are running at their lowest level since April, at around 3 Bcf/d, down 670 MMcf/d from last week’s levels,” noted Barclays. The decline largely has been driven by the force majeure at NGPL and at Tennessee Gas Pipeline Co. LLC, which last Friday declared a force majeure at its Station 1 near Agua Dulce near Corpus Christi.

“Both of these lines deliver gas to NET Mexico, impacting the overall levels of U.S. exports to Mexico,” analysts said. “These are the only two interstate pipelines in the area connecting to NET Mexico. There are other intrastate interconnects available, however it is unclear if these pipes have also been damaged.”

Some exports to Mexico have been re-routed through Texas Eastern Transmission (Tetco), which connects with the Sistrangas system in Reynosa, Mexico. Volumes at that interconnect have been nonexistent for many months, but they rose to 50 MMcf/d last Friday (Aug. 25), totaled 119 MMcf/d through the weekend, and were at 140 MMcf/d on Tuesday (Aug. 29), according to the pipeline’s electronic bulletin board. Tetco can ship as much as 444 MMcf/d through that point.

“In the short term, Harvey appears to have had no impact on LNG exports from the U.S.,” said the Barclays analysts. The only operating LNG export terminal at the moment, Sabine Pass in Louisiana, was outside the path of the storm. Feed gas demand at Sabine Pass was running at 2.2 Bcf/d on Monday, up around 270 MMcf/d on the previous week.”

However, in the longer term, it might be too early to determine if Harvey has had a material impact on other projects underway at Cameron, Freeport and Corpus Christi.

“Any additional delay in construction would be viewed as bearish for natural gas prices as, combined, these three facilities will consume around 4.8 Bcf/d when fully operational,” analysts noted.

Overall, the shifting geographic fundamentals mean severe storms may be “increasingly bearish” for gas prices, according to Barclays.

“Two key things have occurred that will likely mitigate the upside price response to major storms such as Harvey. First, due to the shale gas revolution, the U.S. has seen a major shift from offshore production to onshore production.”

“This shift means that when major storms hit the U.S. Gulf, the amount of offshore production will have a smaller impact on the overall U.S. gas market,” said analysts.

At the same time, the Gulf Coast region increasingly is becoming a major hub for incremental gas demand through exports and increased industrial activity.

“By 2020, Louisiana and Texas should have 7.7 Bcf/d of LNG export capacity compared to just 2.6 Bcf/d today, plus a further 3-3.5 Bcf/d of incremental demand from pipeline exports to Mexico and increased industrial gas demand,” the Barclays team said. “This will mean that major storms will not only impact power demand as we have seen in the past, but also potentially disrupt these new sources of demand that are developing, which is bearish for prices.”

While storms may be more bearish for domestic gas prices, storms have the opposite impact on other global gas benchmarks. Harvey so far has left Sabine Pass exports untouched, but future storms that limit LNG exports could result in higher gas prices in Europe, the Middle East, South America and Asia.

“Of the close to 8.5 Bcf/d of export capacity in the U.S., 92% will be located in the Gulf Coast,” the analysts said. “We expect the U.S. global LNG market share to increase from just 1% in 2016 to 14% by 2020, meaning any disruptions will play a larger role globally in disrupting the supply and demand balance. In such a scenario, we would anticipate a widening of the U.S. Henry Hub-UK National Balancing Point spread.”