The failure to reach an agreement to freeze global oil production by the Middle Eastern-led oil cartel may play to the market fundamentals, but it also could lead to more U.S. bankruptcies as oil prices continue to decline, industry experts said Monday. 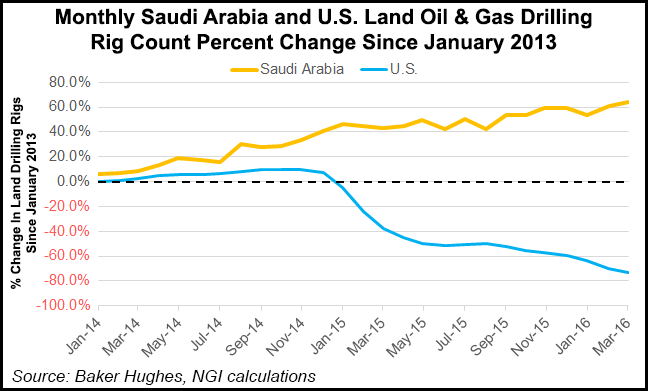 At a meeting in Doha, Qatar, the Organization of the Petroleum Exporting Countries (OPEC) and several other global producers, including Russia, on Sunday failed to reach an agreement to freeze production at end-of-January levels. Participants said they needed more time to reach a deal although the key stumbling block appeared to be a requirement by Saudi Arabia that Iran participate.

“On its own, we view this outcome as bearish for oil prices given consensus expectations for a ‘soft guidance’ freeze at January production levels,” Goldman Sachs analysts said. “Beyond these weekend headlines, our outlook for oil prices remains that gradually improving fundamentals, driven by non-OPEC production declines and not OPEC or Russian production, will bring the market into a sustainable deficit in 3Q2016, which will maintain a deeper backwardation across both Brent and West Texas Intermediate (WTI) forward markets.”

Producers outside OPEC already are guiding to lower output, and the risk to higher oil prices in coming weeks “is that this recent improvement in fundamentals was helped by disruptions and maintenance, which have reduced global supplies by 500,000 b/d in March-June (ex. Kuwait), with the demand surge seasonally driven, all suggesting that once this passes, the rebalancing process and inflection phase will continue for several more months.”

“The result is that the Saudis will continue their strategy of trying to keep prices below the price at which high cost producers re-enter the market, albeit at a lower price than they hoped to achieve with the freeze,” Moore said. “The real impact of this will be felt in the U.S. by the small- and medium-sized independents, and I would expect a significant number of bankruptcy filings for the rest of the year, including filings by some larger, more established companies, because it will be harder for lenders to point to anything in the short and medium term which suggests prices will go up to the point that they will be better off waiting as interest payments are missed and covenants are broken. After Sunday, there may be no more straws at which to grasp.”

The lack of an agreement may allow the fundamentals to “actually reduce the surplus faster,” said Energy Security Analysis Inc. (ESAI) consultants. All of the 18 OPEC members, “except perhaps Saudi Arabia (and of course Iran) are producing and selling all that they can…A production freeze by this group, therefore, would not have markedly reduced the surplus, but it would have temporarily raised crude oil prices.”

WTI oil prices have risen in recent weeks, which was providing an opening for some U.S. operators to get back to work, according to ESAI. Oil prices even in the mid-$40s “are akin to throwing shale producers a life preserver in heavy seas…It is not clear that U.S. producers could expand production at $45 WTI, but certainly a return to the mid $40s would temper the production decline in the U.S.”

While an OPEC agreement may have eased the U.S. surplus, it would have done nothing to eliminate it.

“This coalition of as many as 18 producers has been impressive in their collaboration, but short-sighted in their approach,” said ESAI experts. “They are struggling financially with the drop in oil prices, but their interests are not served by providing a marginal benefit to U.S. producers who are likewise struggling, but who have the most decentralized, financially creative industry in the world…Regardless of the geopolitical reasoning, the Doha result will let the cold winter of low prices propel the incipient decline in crude oil supply.”

Oil prices are going to improve “regardless of what OPEC does or does not do, as U.S. shale oil production, not Saudi Arabia, will be the new swing producer,” Oppenheimer & Co. analyst Fadel Gheit wrote. “We believe oil prices will rise to a sustainable level closer to $60, the new normal, not $100 and not $40 either.”

Borrowing from a character on the Seinfeld television show, Tudor, Pickering, Holt & Co. (TPH) analysts said the message from Doha was “No soup for you!” The “all-or-nothing” production agreement to require Iran to participate guaranteed no agreement would be reached. The end result “failed to reach even lowered expectations,” said analysts.

“Post the non-agreement, we are watching…Saudi Arabia,” said the TPH analysts. Does it flex its muscle and increase production to correspond with summer power demand,” even though it has a natural gas solution? Does it consider a “neutral zone production increase as incremental supply or…quickly ramp production to 11 million b/d?”

Wunderlich Securities Inc.’s Jason Wangler said the lack of an agreement made it clear that “large producers like Saudi Arabia and Iran are not ready to play ball yet as they strive for market share.” Prices are going to go down “hard’ in the short term, and “it will be a ‘free for all’ as producers continue to produce as much as feasible, including Iran. In the mid- to longer-term, we believe the market will fix itself, as a lack of revenues to producers is resulting in less maintenance, less investments and production decline is inevitable. We see this playing out in the U.S. and expect this theme to unfold with other producers as well.”

Without a decision to rein in production by the Saudis, Russians and Iranians, there is little chance for prices to turn upward in the months ahead, said North Dakota’s chief oil and gas regulator Lynn Helms. He discussed the OPEC meeting and its impact on the state last Friday (see Shale Daily, April 15). Sources he has been following indicated that Iran has struck long-term supply deals with India.

“As we move forward I hear more and more out of the industry that India is the new China,” said Helms. “China has announced that it has stabilized its growth rate at about half of what it was in most recent years, and by 2020 that will be cut by half again.”

Analysts have looked at India today, and say it is in about in the same place in terms of economic growth as “China was about 15 years ago in terms of population, increasing demand for automobiles and construction.” Helms predicted that India’s coming growth “will be the thing to watch…”

Under current circumstances, Helms said it looks like prices will not move much above the $40/bbl range until later this year.

“If we keep adding production to the currently over-supplied market, it means we could see prices stay at these levels for some time,” he said. As far as the impact to the Bakken Shale, he said state could go back to declines like were experienced the end of last year in the next two or three months.

It will take new infrastructure for getting the Bakken supplies to the West Coast before Bakken crude is exported, Helms said.