The Mexico unit of France-based Engie plans what amounts to a natural-gas offensive to attack the liquid petroleum gas (LPG) stronghold of Cancun, by far the nation’s largest tourist destination and a principal pole of the nation’s economic development. 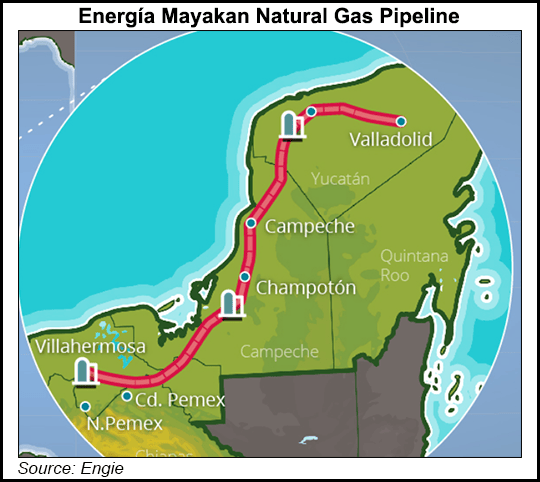 Meanwhile, on the opposite end of Mexico, a project to bring natural gas to the Los Cabos area has been shelved. Los Cabos, at the tip of the Baja California peninsula, is much smaller than Cancun, but regarded as considerably more exclusive.

Engie’s project is an expansion of the EnergÃ­a Mayakan pipeline, which has been supplying natural gas since 1999 from a processing plant of the state oil company Pemex, located in the state of Tabasco. The gas provides, almost exclusively, the power plants of the state-owned utility, the Comision Federal de Electricidad (CFE), in the states of Yucatan and Campeche.

The Mayakan pipeline is of historical importance. It was the first built by the private-sector initiative in the wake of a relaxation of the state power monopoly that also led at the end of last century to the first independent power producers.

The proposed 780-kilometer extension aims to provide natural gas to hotels, homes and light industry in Cancun and the surrounding area known as the Riviera Maya.

Announcing an open season for the project, Fernando Tovar, chief executive of Engie’s Mexico unit, said: “We’re planning to invest at least $300 million, along with our partners to transport natural gas to the state of Quintana Roo” [in which Cancun is located].

Should the open season receive a positive response, the aim would be to bring the extension onstream in 2020.

However, analysts say that a positive response from the open season is by no means a foregone conclusion because of the power of Mexico’s LPG lobby.

At 74 kilos per head of population, Mexico is regarded by some counts as the world’s leading consumer of the fuel for domestic purposes. Amexgas, one of two industry associations, says it has “channelled more than $2 billion in order to ensure supply, security and quality” of LPG.

Amexgas and others, however, have been accused of using their economic power in Congress, the press and “grassroots” neighborhood groups that fight natural gas schemes because they claim, falsely, that natural gas is much more dangerous and costly than LPG.

To stay up to date on Mexico’s deregulating natural gas market as developments unfold, sign up and be one of the first to receive NGI‘s Mexico Gas Price Index, a free daily newsletter.

Now CFE has cancelled a tender to provide Baja California Sur with natural gas. Instead, it will provide power by means of an underwater transmission line across the Sea of Cortez from Bahia de Kino in the state of Sonora.

CFE estimates that the 400 kV undersea cable will be 105 kilometers in length, and its capital cost is likely to be about $1 billion.

The tender documents had said that the cost of supplying 227 MMcf/d of natural gas to Baja California Sur would have been $600 million. But the area currently uses small power units using fuel-oil and diesel, and nobody has shown interest in building a combined-cycle unit in what is a very sparsely populated region, according to Prodesen, the national electricity plan published by the Energy ministry.

Prodesen says the transmission line would have the double virtue of connecting the peninsula to the mainland and reducing the pollution caused by the fuel-oil and diesel units.