The liquid fuels storage business has emerged as a primary growth engine for Infraestructura EnergÃ©tica Nova (IEnova) as global refiners seek to offload their products to a hungry Mexican market. 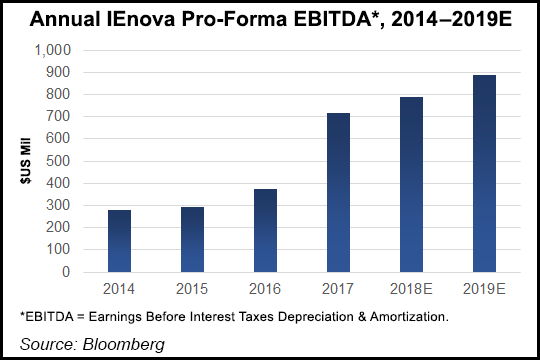 Having entered the segment a little more than a year ago, the Mexico unit of U.S.-based Sempra Energy now has a portfolio of five wholly-owned storage projects demanding combined capital expenditure (capex) of $595 million, all of which are slated to enter operation in 2019 or 2020, IEnova CEO Carlos Ruiz told analysts Thursday during a second-quarter earnings call.

The most recent addition to the storage portfolio was a $150 million fuel receipt, storage and offloading terminal project awarded to IEnova this month by the AdministraciÃ³n Portuaria Integral de Topolobampo, a federal port authority. The Pacific coast facility in Sinaloa state will have storage capacity of 1 million bbl, housing mainly gasoline and diesel, and has a targeted commercial operation date (COD) of 4Q2020.

IEnova also reached a deal in April with Valero Energy to increase storage capacity at the Veracruz marine storage terminal on the Mexican Gulf Coast by 700,000 bbl to 2.1 million bbl. As a result, the COD for this project has been pushed to 3Q2019 from 4Q2018, and its estimated capex has increased to $170 million from $155 million.

AndrÃ©s Manuel LÃ³pez Obrador, who is slated to assume Mexico’s presidency Dec. 1, has announced plans to shore up the country’s refining capacity in an effort to reduce dependence on imported refined products.

Ortiz also said that Sempra is in “advanced discussions with interested parties regarding the ECA [EnergÃ­a Costa Azul] liquefaction project, and we will continue defining the commercial opportunity with that.”

IEnova and Sempra announced in January that they had selected TechnipFMC and Kiewit to jointly carry out engineering, procurement, construction and commissioning (EPC) work on the project, which will allow for the liquefaction and export of natural gas via the ECA regasification terminal in Baja California state.

Ortiz said IEnova is in discussions with multiple potential offtakers for liquefied natural gas (LNG) exported from the terminal, and expects to make a final investment decision on the liquefaction project in late 2019. In this scenario, Ortiz said the company would be aiming for LNG exports to commence in 2023.

Asked whether the project’s costs would be comparable to those of Cheniere Energy’s Sabine Pass liquefaction terminal on the U.S. Gulf Coast, Ortiz said, “We have not disclosed any capex figures, but we believe our facility can be competitive with the Gulf Coast projects.”

With regard to mergers and acquisitions opportunities in Mexico, Ruiz said that IEnova is mainly looking at renewable projects. He added, however, “there is a potential for some gas pipelines, but we may be able to comment in the next call.”

“The increase of $56 million was mainly due to the TermoelÃ©ctrica de Mexicali [thermal power plant] non-cash after-tax impairment charge in the second quarter of 2017,” IEnova said, as well as improved operational performance at the plant.

Although IEnova had said in its first quarter earnings presentation that Mexico’s plan to create strategic underground inventories of natural gas could create investment opportunities of up to $2 billion, executives were mum on Thursday’s call.

Lower 48 oil and gas producers have drawn down their inventory of drilled but uncompleted (DUC) wells to pre-pandemic levels, reflecting an improved commodity pricing and demand outlook, according to new analysis by Rystad Energy. After reaching a multiyear high of 6,548 wells last June, the DUC count in the country’s major oil regions fell…