The coronavirus has upended the global liquefied natural gas (LNG) market, driving up freight rate volatility as an increasing number of cargoes are floating throughout Asia while others are being diverted. 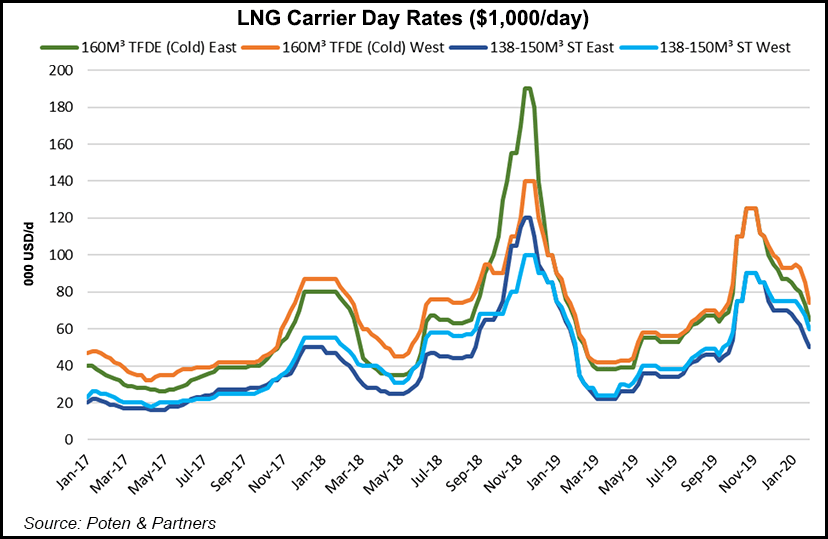 But the recent volatility is different. Fourteen vessels that were initially expected to deliver LNG in the Far East are now headed for different regions, while 21 vessels were floating with the super-chilled fuel near Western Australia, the Middle East and across Asia, according to recent shipping data from intelligence firm Kpler. Some of the diverted ships were headed to Europe, where storage inventories remain high.

At today’s prices, “you can’t sit on a cargo for four months and then hope to get more than you paid for it into Europe in June,” Feer said at the S&P Global Platts LNG conference.

On top of that, boil-off remains an issue, PetroChina LNG trader Eric Pedroso said. Keeping the vessel cold and ready to load, even at a day rate of $15,000 or $20,000 per day, “the cost of keeping an LNG ship available to the market is too high.”

Feer said that the industry should be “really cautious” when reading headlines about floating storage as it pertains to the LNG market. “When people do floating storage because of boil-off, because of day rates, when it’s done in LNG, it’s because something went wrong…It’s a Hail Mary.”

However, tools to manage freight risks are gaining traction, including a freight forward curve, and the risk associated with rate volatility is one that Feer said market players will be better able to manage in the next couple of years. Although there was “a fair amount of fat in LNG trade” a few years ago, as margins have come down, “there is more pressure to manage risk,” he said.

“An extra 10 cents of shipping exposure makes your five-cent deal into a five-cent loser. If you’re on these really razor-thin margins, you really can’t afford to not cover all of your risk.”

The latest data from ship brokerage Fearnleys shows that despite an increase in floating storage, shipping rates are continuing to slide in both basins, “quicker than one would expect, as lackluster demand goes on.” Cargo prices remain under pressure, offering minimal trading margins, the firm said.

In the West, increasing availability sees independent owners and portfolio players with excess length “fighting” for requirements, according to Fearnleys. “In such a market, utilization for owners is key, hence recent tests on levels have shown further drops.”

In the East, a halt in demand and delays in Chinese ports on the back of the Coronavirus see more diversions as well as floating storage situations, “the levels of which, however, are not high enough to the extent we could see some recovery in rates,” Fearnleys said. “Nevertheless, should floating storage continue, we should not disregard the case of few extra requirements to emerge in this basin.”

Meanwhile, there are new entrants in the shipping market. In addition to the traditional players who build and operate ships, there also is “more private equity money, more sophisticated money” coming into the market, according to Feer. “And those folks are a lot more demanding and a lot more rigorous in how their assets are managed and how they manage their risk.”

However, widespread adoption of a risk management benchmark in the United States has been elusive. Traders are doing a fair amount of business in the LNG market, but “probably not in critical mass enough to single-handedly establish a benchmark in the Atlantic Basin,” according to Feer. Instead, the decisive factor is aways who the biggest gorilla in the room is and which benchmark they choose, he said.

Managing risk is the biggest issue in the market for traders, according to Pedroso. While benchmarks have been established in Asia and Europe, the LNG market’s evolution needs to include the development of pricing for the rest of the world to manage their positions, he said.

“The market is there. The liquidity is there for the physical volumes. The biggest issue and the biggest concern in the market today is the ability of the traders, especially on this side of the world, to manage risk,” Pedroso said.

That said, the establishment of a benchmark is likely over the next year or two, as prices are projected to remain low and supplies abundant, according to Feer. “We’re getting there.”

Poten projects that some 45-50 cargoes could be rejected by China due to the coronavirus, and that’s if the outbreak winds down by the end of April.

Chinese companies are beginning to declare force majeure on their contracts with Chinese importers, which will likely lead the next wave of disruptions, according to Feer. China National Offshore Oil Corp. (CNOOC) began issuing force majeure notices earlier this month, and although LNG suppliers Royal Dutch Shell plc and Qatargas rejected the notices, Total SA negotiated a deal in which CNOOC received a cargo in return for Total deferring other deliveries. PetroChina also has received force majeures from its customers and has warned that it could do the same unless downstream demand rebounds.

The supply chain is “very delicate,” and there isn’t a lot of spare capacity, Feer said.

India could take roughly half of the cargoes, and Japan and Korea also could take “a few,” but storage tanks in those countries are full, according to Poten. Europe, viewed as the market of last resort, has some limited ability to take in additional cargoes, but storage levels also are very high and other suppliers continue to flow gas into the region as well.

Compounding the issue is that the forward curve for the Dutch Title Transfer Facility (TTF), a European benchmark, indicates that U.S. LNG cargoes to Europe “are deeply out of the money” into the fall, unless freight costs are considered sunk costs, Feer said. Asian arbitrage opportunities also are close to a point in which it makes more sense to sublet a vessel.

Energy Aspects analysts also said last week they expect Japan Korea Marker spot prices to remain at record lows over the coming months, trading near parity with the TTF because of the ongoing impact of the outbreak on Chinese gas demand.

The additional supplies in the market is seen boosting the global surplus by about 10%, according to Poten’s estimates.

With global gas prices at unprecedented lows, the biggest question is whether the market will “cross the line and go lower than it already has,” according to Pedroso. “Is 115% of Henry Hub the real floor of the market?

“Traders are watching. The market will be driven by the price,” he said.

Nevertheless, Pedroso expects to see the market return to a “more stable level” over the next few months, although he indicated that some projects in development may not move forward. Other analysts share that view, including Enverus’ Rob McBride, senior director of strategy and analytics, who told NGI recently that “it will be very difficult to secure the long-term offtake agreements needed to obtain financing.”

In the United States, more than 20 announced projects totaling roughly 35 Bcf/d are looking to catch the second wave of gas exports over the next decade. The U.S. Department of Energy issued long-term orders last week authorizing exports of domestically produced LNG from four new projects in Texas.

Meanwhile, in addition to the tackling risk, Pedroso said he would like to see the market build a more efficient mid-scale business. He pointed to Latin America, a region with “small demand, variable demand. Sometimes they need 10-30-50,000 cubic meters. Where is the infrastructure to provide that for the market? It doesn’t exist.”

Feer, meanwhile, said the market would have to “endure” a tough environment for the next couple of years. Even once the coronavirus outbreak is contained, he doesn’t expect China’s LNG demand to be quite as robust as some portray it to be. He noted that the country’s domestic gas production is growing faster than companies’ targets, and pipeline supplies from Russia continue to increase.

“We think Chinese LNG demand is going to grow, but at a smaller and flatter curve,” Feer said.

The one caveat to Poten’s forecast is air quality. If China cracks down aggressively on coal, then there likely would be a strong requirement for LNG. However, China’s most important consideration in policy is crowd control, according to Feer. “Throwing hundreds of thousands out of work is really bad for that and is a threat to domestic stability.”