Multiple polar vortices with chilling cold have created freeze-offs impacting billions of cubic feet of natural gas production in the Marcellus and Utica shales over the last few weeks, and it could be months before production returns to normal, according to Genscape Inc. 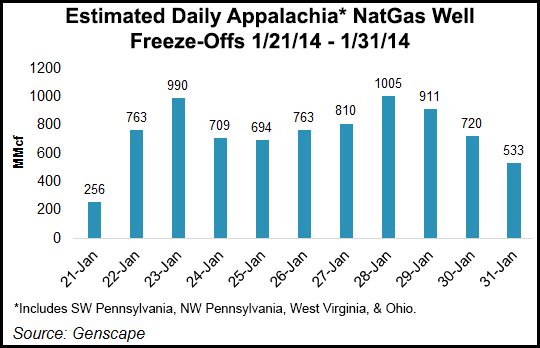 Industry consultant Genscape points out that daily gas production stood at about 8.37 Bcf on Jan. 20 in northeast Pennsylvania, followed by 2.96 Bcf in southwest Pennsylvania, 2.56 Bcf in West Virginia and 693 MMcf in Ohio.

But freeze-offs reduced production in West Virginia by 235 MMcf on Friday. In northeast Pennsylvania, production was off by 211 MMcf, and Ohio was down by 87 MMcf. For the entire Lower 48 states, freeze-offs collectively offset production by 1.31 Bcf on Friday, although other regions did not have freeze-offs and had production above the Jan. 20 baseline.

The Genscape data showed that Tuesday, Jan. 28, was the worst day for freeze-offs in the Marcellus and Utica region since Jan. 20. On that day, production in northeast Pennsylvania was offset by 410 MMcf, followed by West Virginia losing 266 MMcf, Ohio was down 184 MMcf and southwest Pennsylvania lost 145 MMcf.

“I don’t know that the region ever really saw [such low] temperatures when that first polar vortex hit,” Gould said Thursday. “Before that, you had some cold temperatures, but you had nothing that really impacted production to this extent. Since then we’ve seen production has been down and that as each additional cold front comes through, production comes off a bit, then slowly starts to ramp back up.

“This weather has been so severe. I can’t recall that we’ve ever seen anything this significant in the Marcellus.”

Gould said it could be months before production fully recovers.

“It can literally take a number of months before that production can get right back up to that normal level, excluding any kind of overriding trend in the area,” Gould said. “It depends on a number of factors — when does the cold front hit; are there sustained cold fronts; are the road conditions good enough to get a crew to the wellhead — that all impacts the timeliness of the return.”