Natural gas futures were humming along most of Wednesday, with prices moving in and out of positive territory amid little change in the weather forecast or production data. In the last half hour of trading, however, the September Nymex exploded higher as details emerged regarding Freeport LNG’s potential return. At the close, the prompt month had soared to $8.266/MMBtu, up 56.0 cents day/day. October futures jumped 56.4 cents to $8.262. 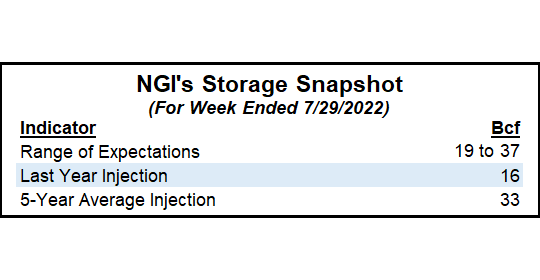 A consent agreement was reached between Freeport and the Pipeline Hazardous Materials Safety Administration (PHMSA), and the news spread like wildfire, which was confirmed by the liquefied natural gas export terminal

Freeport said in addition to corrective measures outlined by PHMSA in the agreement, many already underway, initial operations in October may consist of three liquefaction trains, two LNG storage tanks and one LNG loading dock. The management team said it believes these operations would enable delivery of about 2 Bcf/d of LNG, “enough to support its existing long-term customer agreements.”

Whether Freeport returns to full service in October or not, the market was abuzz Wednesday afternoon. The September Nymex contract – coming off a $7.706 settlement on Tuesday – soared to an $8.480 intraday high.

“In a nutshell, what changed was expectations of one train in October, getting all three trains instead,” per Freeport’s press release, said a participant on The Desk’s online energy chat Enelyst. “It adds about 1.3-ish Bcf/d over what was expected for October.”

Will Storage Move The Needle?

Freeport’s potential return notwithstanding, Thursday’s storage report could offer the market the next piece of data that could drive prices sharply in either direction.

Bespoke Weather Services said weather-adjust power burns were looser last week compared with the current week. As such, the market is likely to see a storage injection of 35 Bcf in the next Energy Information Administration (EIA) report, according to the firm. This would compare with a 16 Bcf injection into inventories for the comparable week last year, according to EIA. The five-year average build is 33 Bcf.

An injection close to 40 Bcf or higher on Thursday would take prices another leg lower, Bespoke said. However, in that scenario, the firm could envision “some buyers stepping back in, given current data – as long as the weather forecast remains on the hotter side of normal.” An injection near 30 Bcf could take prices to $8.00.

Estimates were wide ranging ahead of Thursday’s EIA report, to be published at 10:30 a.m. ET. A Bloomberg survey of eight analysts produced a range of injection estimates from 19 Bcf to 35 Bcf, with a median of 26 Bcf. A Wall Street Journal poll of 12 analysts had a tighter range of projections that averaged a 29 Bcf increase in storage. Reuters polled 15 analysts, whose estimates were as high as 37 Bcf, with a median forecast of 29 Bcf.

Last week, EIA said inventories increased by a lower-than-expected 15 Bcf. This lifted stocks to 2,416 Bcf, which was 293 Bcf below year-earlier levels and 345 Bcf below the five-year average for the period.

The key problem facing the gas market is the lingering storage deficit from last winter, which limits the market’s margin for error and rolls forward upside price risks, according to EBW. The return of LNG exports from the Freeport terminal, and low coal stocks furthering power sector gas burns, would be key drivers of upside price risk later this year.

“However, if the market fails to rapidly rebuild gas storage this fall, entering the heating season with under 3.4 Tcf of inventory would dramatically increase risks of price spikes in 4Q2022,” EBW senior analyst Eli Rubin said.

With tight domestic supplies and little certainty about sustained production growth, 2023 is setting up to be “a very interesting year,” according to Mobius Risk Group.

For one, there is the risk of having to compete with European pricing this winter, especially if early season cold drags storage levels lower sooner than expected. On the flip side, there is potential for the Mountain Valley Pipeline (MVP) pipeline project to be completed by late 2023.

“Whether or not domestic markets will need to price off LNG exports this winter is a function of weather, an obviously difficult risk to pin down,” Mobius analyst Zane Curry said. “Equally as challenging is quantifying the odds that the MVP project is completed in time to materially impact the amount of gas which could be injected during summer 2023.”

Sens. Joe Manchin (D-WV) and Majority Leader Chuck Schumer of New York secured a potential side deal to ease the permitting process for energy infrastructure projects. The deal signaled that MVP could receive the federal permitting to complete the project. It was separate from the $369 billion climate and energy spending package clinched last week.

The 300-mile MVP is “long overdue” and a critical artery which aims to bring 2 Bcf/d of low-cost Appalachian supply to a “needy Mid-Atlantic market,” according to Mobius. The firm pointed out that the market where the MVP project would terminate, Transco Zone 5, has become the highest-priced location in the country amid tight pipeline capacity and record heat this summer.

EQT Corp.’s Equitrans Midstream Corp. would own and operate MVP. For Mid-Atlantic consumers, the company could become “somewhat of a savior if/when the project begins delivering incremental supply to a market which has seen its share of coal retirements,” Mobius said.

With temperatures set to reach the 90s again on the East Coast, price increases were more stout in that region. In Appalachia, Eastern Gas North next-day gas jumped 26.0 cents to $7.200, and Texas Eastern M-3, Delivery shot up 45.0 cents to $7.900.

The National Weather Service said temperatures could even hit the triple-digit mark for some areas of the Mid-Atlantic and Northeast later this week. However, a cold front should follow the heat wave.

The West Coast also had its fair share of notable price changes, mostly to the upside. SoCal Citygate climbed 27.0 cents to average $9.380, while the SoCal Border Avg. jumped 39.5 cents to $9.225.