Fresh from the Aliso Canyon natural gas storage leak, Los Angeles now is contending with continuing concerns about a Freeport McMoRan Inc. (FCX) wellsite that has been reactivated adjacent to a environmental studies magnet school southwest of downtown. 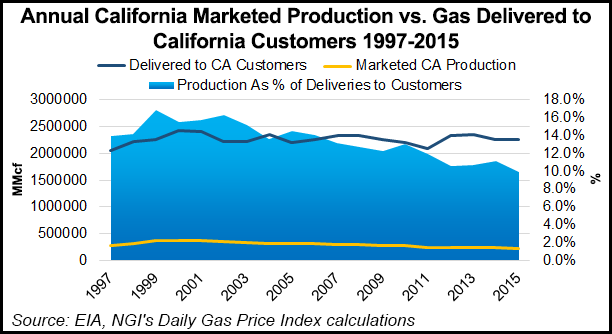 Noting the site is still economic, a spokesman for FCX disputed activist claims that the exploration unit is only restarting the wells to avoid the cost of permanently abandoning them (see Daily GPI, Jan. 29). Oil production has been halted at the site for at least five years, and the reactivation is to extract natural gas, according to the company.

Eric Kinneberg told NGI on Tuesday that the FCX board is in the midst of a strategic review of alternatives for all of its oil and gas assets. The board for months has been reviewing strategic options for the flailing exploration unit, including a sale (see Daily GPI, Dec. 9, 2015).

“Freeport-McMoRan and its advisers are actively engaged with interested participants in a process to evaluate opportunities that include a sale of assets and joint venture arrangements,” Kinneberg said.

The Los Angeles Fire Department ordered the FCX exploration unit to either restart the wells or permanently plug and abandon them. Kinneberg said the fire department and the state Division of Oil, Gas and Geothermal Resources (DOGGR) inspected the now reactivated wells before they were restarted.

Residents continue to be concerned about the wells whether they are active or not. They view them as a hazard that ultimately should be removed. The 4th Avenue property is one of three sites that the FCX production unit operates in the Las Cienegas Oilfield. The company was evaluating its long-term options for the property in recent years when the fire department ordered the site reactivated or abandoned.

State rules require that if a well has been idle for six consecutive months, it must be tested before it can be reactivated. After that, there are no clear mandates for how frequently the wells should be inspected. Local DOGGR representatives decide on varying approaches, depending on local geological and topographic considerations, such as groundwater depths.

“DOGGR has significant oversight responsibilities for oil/gas production,” said a spokesperson, “however, at this time, [FCX] is in compliance with division regulations. Thus, DOGGR has no cause [currently] to take action against the operator.” If the proposed new legislation was in effect, that might be a different story, he indicated.

Since last November, periodic resident demonstrations have erupted, protesting plans of an FCX unit to flare associated gas at another site in a working class neighborhood near the University of Southern California (USC) campus, and separately near a USC-owned site operated by Allenco Energy Co. (see Daily GPI, April 28, 2015).

California operations in 2015 accounted for 37,000 boe/d of total production of 144,000 boe/d, mostly from the offshore Gulf of Mexico. However, Kinneberg said the wellsite “continues to have economic value” so the company “chose to reactivate the facility in compliance with the city municipal code and state regulations.”