News on Wednesday that around 2 Bcf/d of liquefaction capacity at Freeport LNG in Texas would be back online as early as October reawakened the bulls in the North American natural gas futures market. 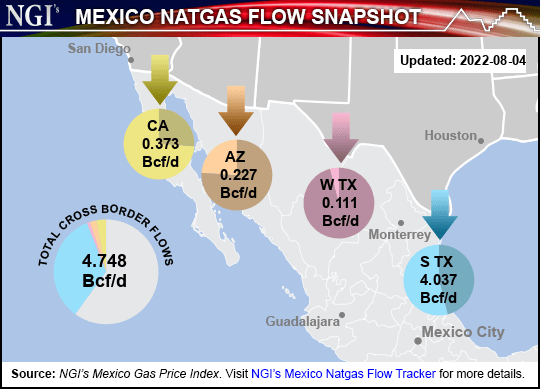 Freeport management said it believed if it were to start up operations in October, it could deliver about 2 Bcf/d of LNG, “enough to support its existing long-term customer agreements.”

The market activity came after weather models were showing less heat by mid-August, leading to downward pressure on prices earlier in the week.

Executives at oil and gas companies however have been very clear in earnings calls that they see elevated prices continuing. Because of the gas crunch in Western Europe, global gas prices are forecast “to remain elevated and for there to be quite a bit of volatility,” BP plc’s CEO Bernard Looney said Tuesday.

BP CFO Murray Auchincloss told investors that “the outlook for global gas prices is heavily dependent on Russian pipeline flows. We expect prices to remain elevated and volatile during the third quarter due to a lack of supply to Europe.”

Some pipelines that deliver gas to Mexico, including NET Mexico Pipeline Partners LLC’s 2.3 Bcf/d NET Mexico pipeline and Kinder Morgan Inc.’s KM Border pipeline, “all had flows drop by half or more during the increased temperatures” in the United States this past weekend, said NGI markets analyst Josiah Clinedinst. He suggested some of these flows were diverted to increased power demand in the southern United States.

Increased Mexico natural gas production could also be making more of a dent in the domestic market.

Mexico dry gas output has averaged 2.87 Bcf/d so far in August, according to Wood Mackenzie’s preliminary estimates. This is down slightly from July, “but it remains robust enough to affirm the general uptrend,” Wood Mackenzie analyst Ricardo Falcón told NGI’s Mexico GPI.

“Efficiency gains in processing operations, together with incremental non-associated gas production, have been critical in what now seems a structural shift,” he added.

Natural gas production in Mexico averaged 4.04 Bcf/d in June compared with 3.87 Bcf/d in the same month a year ago, according to the latest data from upstream regulator Comisión Nacional de Hidrocarburos (CNH). State oil company Petróleos Mexicanos (Pemex) supplied 3.8 Bcf/d of the total, up from 3.7 Bcf/d in the year-ago month.

Mexico’s Sistrangas five-day line pack average rose this week, hitting 6.689 Bcf on Wednesday (Aug. 3). The line pack is still below the optimal range of 6.86-7.29 Bcf needed to guarantee sufficient pressure in the system. Line pack has been a persistent problem all year on the Sistrangas.

Demand on the Sistrangas on Wednesday was 4.648 Bcf, up from 4.593 Bcf a day earlier. Mexico gas production fed into the system was 1.280 Bcf, basically flat compared to last Wednesday. Southeast production dominated the total, with 716 MMcf from the region injected into the pipeline system.

In Mexico, NGI natural gas cash prices fell week/week, after three straight weeks of solid gains. On Wednesday, Los Ramones rose 4.0 cents day/day to $7.826. Monterrey via the Mier-Monterrey system was up 4.0 cents to $7.593.

On Thursday, the U.S. Energy Information Administration (EIA) reported a 41 Bcf injection into natural gas storage inventories for the week ending July 29. The print was higher than expectations.

The South Central recorded an increase of 3 Bcf into nonsalts, according to EIA. Salt stocks remained unchanged. Until Mexico develops storage capability, this is the storage system most readily available to the country.