Executives developing liquefied natural gas (LNG) terminals on the Gulf Coast on Wednesday described a bittersweet situation, as Russia’s invasion of Ukraine has elevated the importance of export projects that up to now were fighting for capital. 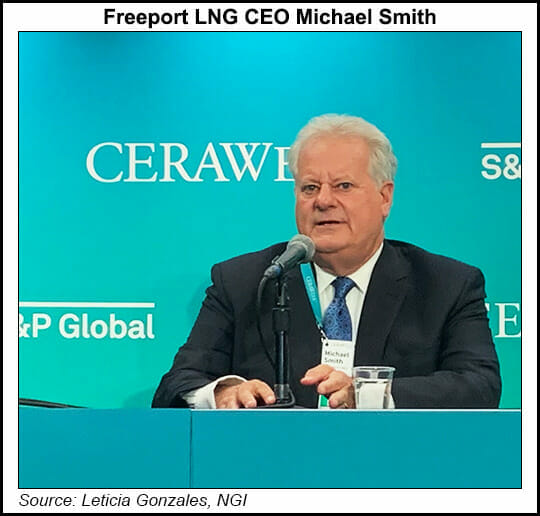 On the day traditionally devoted to natural gas, panels at CERAWeek by S&P Global shifted to what LNG exporters were expecting as Europe continues to grapple with the possible absence of Russian supplies and higher commodity prices.

Michael Smith, CEO of Freeport LNG Development LP, said the situation was “unfortunately” creating a strong environment for expansions. Freeport is planning a fourth train for the LNG terminal on Quintana Island near Freeport, TX. The expansion would add an additional 5 million metric tons/year (mmty) to the complex, boosting it to 20 mmty when the project goes online.

Each of Freeport’s trains were designed to produce 5 mmty of super-chilled gas, and the complex is currently at a 15 mmty capacity after Train 3 went into service in May 2020.

Smith believes the market has finally reached an inflection point that would allow Freeport to reach a final investment decision (FID) on the fourth train in early 2023. He also said the company is still in talks with key customers on long-term contracts, and the tone of those conversations have changed along with current pressures on the market.

Still, the heightened focus on U.S. LNG is coming at the cost of lives and livelihoods for Ukrainians, Smith said, making it no time to celebrate.

While the current outlook of U.S. LNG is colored by war in Europe, industry executives agreed that armed conflict wasn’t necessary to spark climbing costs across the continent. A drawback of spot gas from Russia since the beginning of winter already boosted the Dutch Title Transfer Facility price to new highs and shifted the balance of U.S. LNG cargoes to Europe.

Tellurian Inc. Executive Chairman Charif Souki discussed the market and spent a few minutes sharing insight about the long proposed Driftwood project on a separate panel. However, he never indicated when the Louisiana project may be FID’d.

Souki agreed with Smith that relying on U.S. LNG exports was inevitable because of growing demand and stunted hydrocarbon investments in Europe. The Russian war with Ukraine has exacerbated the situation.

Years without enthusiastic investment and few FIDs for projects now means that Europe has been left with “no short-term solution” for the current crisis. Souki said the best time to invest in an LNG project was five years ago and the second best time “is today,” leaving the continent’s power utilities to either fuel-switch to coal or suffer high prices.

The only new additional LNG capacity to be placed online this year was Cheniere Energy, Inc.’s sixth train at Sabine Pass LNG in Louisiana and Venture Global’s first phase of Calcasieu Pass LNG nearby on the Calcasieu Ship Channel.

Souki was reserved about an FID for Driftwood LNG, the proposed 27 mmty project near Lake Charles, LA. He said he was optimistic the current environment would further accelerate financing and possibly allow Driftwood to be one of the first projects to get off the ground in four years.

Souki, who founded Cheniere, was fired as CEO in late 2015. He then turned competitor by forming Tellurian. He believes when Driftwood makes its debut, it could be part of a building LNG market transformation.

The success of the U.S. LNG industry’s more flexible approach has proven customers are willing to forgo long-term contracts when necessary, Souki said. The current market frenzy likely means companies are even closer to leaving them behind altogether.

“You don’t see people entering into long-term contracts for other commodity businesses,” Souki said. “We are looking for a different business model.”

While Smith was confident that current market demands would help usher in the next generation of liquefaction facilities, he also cautioned that there would have to be a paradigm shift when talking about future contract prices and costs. The long cycle to building and permitting facilities means equipment and design standards can often change through the years, but so have costs for essential materials like steel.

“I think things are only more expensive,” Smith said. “So, why would we think we could build a terminal for the same or lower than the first wave of U.S. LNG projects?”