Freeport LNG Development LP is still planning to meet its previous guidance of a partial restart of its liquefaction facility later this month, according to representatives with the company, while regulators await final documentation. 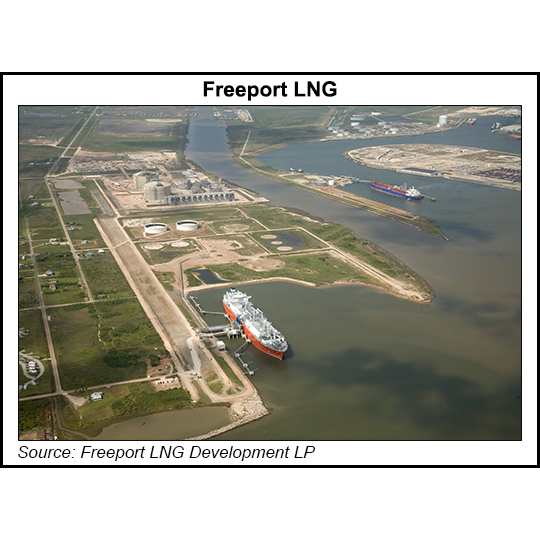 The 2.38 Bcf/d liquefied natural gas export terminal on the upper Texas coast has been offline since a June explosion attributed to an 18-inch insulated pipe in its transfer system near the site’s storage area. Since then, the outage has contributed to market anxieties over the historically tight global LNG market and growing U.S. gas inventories.

Spokesperson Heather Browne said in a statement Tuesday that Freeport is making progress on its work to restore operations at the facility and is still aiming to restart production this month.

The firm previously disclosed a timeline to achieve a partial restart in mid-November after the announcement of a consent agreement with the Pipeline and Hazardous Materials Safety Administration (PHMSA) in August. Under the timeline put forward in August, the plant would ramp up to 2 Bcf/d by the end of this month, but full capacity isn’t expected to return until March, when a second loading dock returns to service.

BP plc’s CFO Murray Auchincloss told Reuters Tuesday that the company has also been advised to expect cargo deliveries to resume this month. BP is Freeport’s largest offtaker, with a contract for 4.4 million metric tons/year through 2040, Reuters reported. In the company’s third quarter earnings call with analysts, Auchincloss said impacts of the lost volumes from Freeport were largely offset by the late summer cooling demand.

However, a concrete timeline for a restart of the facility is still up in the air as federal regulators request more information about Freeport’s progress over the last five months.

‘More Than What It Is’

Freeport LNG management participated in a call with Federal Energy Regulatory Commission and PHMSA staff on Oct. 27 to discuss activity at the terminal site and restart plans, according to an Oct. 31 filing. During the call, representatives discussed the schedule of the assessment and additional information Freeport is required to provide before receiving approval for a partial restart.

“Both FERC and PHMSA reiterated the need for Freeport to provide this information as soon as possible to allow sufficient review time,” agency staff wrote in the filing.

Freeport has given incremental updates to PHMSA, but the agency hasn’t received its required remedial work plan for review or a request to restart operations as of Wednesday, a spokesperson from the agency told NGI.

In a note, analysts from Criterion Research LLC wrote that “it is tough” to interpret the agency’s response “for more than what it is,” concluding that Freeport is still roughly in the same position as when it released its restart timeline in August.

“It is very unclear what the restart paperwork entails, or how close Freeport really is to being in compliance with the consent agreement – they could have two pages left to send to PHMSA or 200 pages left to complete,” analysts wrote.

As of midday Wednesday, two LNG vessels have declared Freeport as a destination, including one expected to arrive at the end of the week, according to data from Kpler. The other vessel is expected near the end of the month. At least three vessels have canceled their declarations for Freeport since Tuesday.