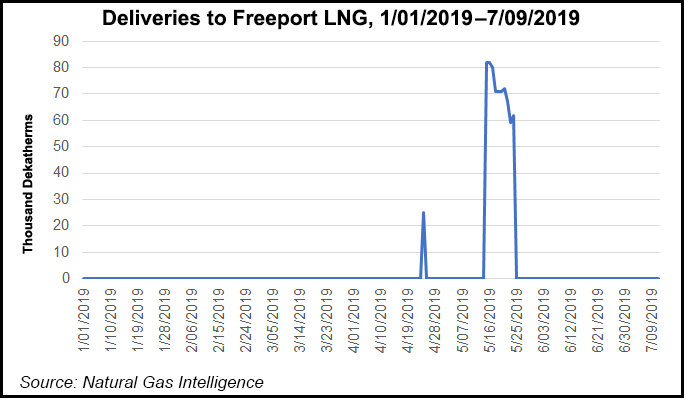 In an order issued Wednesday, FERC said Freeport LNG could introduce hazardous fluids for the commissioning of the “B” booster and residue gas compressors within the inlet and outlet facilities (Unit 60) at the Freeport pretreatment facility. The approval was based on the Federal Energy Regulatory Commission’s review of information filed.

FERC’s approval does not grant Freeport the authority to commission or introduce hazardous fluids at other parts of the project facilities. Additional authorizations would be released once the developer has demonstrated full compliance with the conditions of the order, the Commission said.

The first production unit at Freeport is expected to enter commercial operations in the third quarter, with two more trains expected online by mid-2020. In May, a proposed fourth train at the Texas facility was approved for global exports by FERC and the Department of Energy, with operations set to begin in 2023.

The fourth train would add more than 5 million metric tons/year (mmty) to its existing project, increasing total export capability to more than 20 mmty. Roughly 13.5 mmty of the capacity has been contracted under 20-year tolling agreements to Osaka Gas Trading & Export LLC, Jera Energy America LLC, BP plc, Toshiba America LNG Corp. and SK E&S LNG LLC. About 0.5 mmty has been contracted to Trafigura PTE Ltd. under a three-year sale and purchase agreement that begins in 2020.

After some uncertainty over its outside-of-the-box business model, Tellurian Inc. on Wednesday scored a major victory after inking definitive agreements with Total SA to purchase LNG and add another investment, this one for $500 million, in Driftwood Holdings LP. Total made an original $207 million investment in 2016.

The deal was announced in April via a heads of agreement for Total to purchase 1 mmty from the proposed Driftwood export project, to be sited on the west bank of the Calcasieu River, south of Lake Charles, LA. Driftwood is being proposed as a 27.6 mmty liquefaction export facility.

Tellurian and Total Gas & Power also entered into a definitive sales and purchase agreement for an additional 1.5 mmty from LNG offtake volumes from Driftwood. The production would be purchased on a free-on-board basis at a price linked to the Japan Korea Marker.

“The agreements we have executed with Total confirm the business model for the Driftwood project, establishing it as an LNG joint venture partnership with an implied value of $13.8 billion,” CEO Meg Gentle said.

Total’s aggregate investment in the Tellurian portfolio will be about $907 million at the point of a final investment decision (FID). Once it is sanctioned, first LNG could begin in 2023 with full operations in 2026.

“We intend to finalize the agreements with the remaining partners and make FID in 2019,” Gentle said. “At full capacity, Driftwood will be capable of exporting approximately 4 Bcf/d of natural gas, providing solutions for the acute U.S. oversupply and delivering cleaner air to the world.”

In addition to the export terminal, Tellurian also has gas production, gathering, processing and transportation projects in the works. The Driftwood Pipeline is a 96-mile, 48-inch diameter gas pipeline that would transport up to 4 Bcf/d from near Gillis, LA, and terminate at the LNG export terminal. Two additional pipeline systems would bring in supplies from the Permian Basin and the Haynesville Shale.

Tellurian in February reached a memorandum of understanding (MOU) with India’s Petronet LNG Ltd. India (PLL) for a potential investment in the Driftwood project. It also secured an MOU with Vitol Inc. in December to supply 1.5 mmty of LNG for at least 15 years.