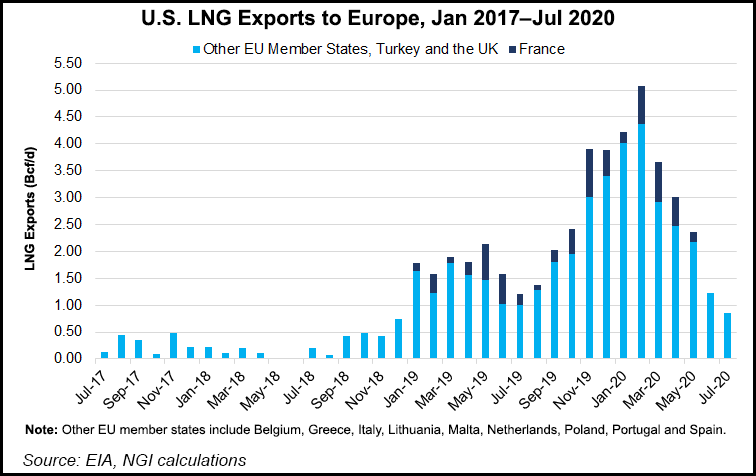 NextDecade declined to comment to NGI about the matter.

Engie’s board last month decided to further investigate the environmental implications of the potential $7 billion, 20-year contract before deciding whether to fund it.  The government owns a 23.63% share in the company. The proposed deal was slated to run until 2045, meaning that exports would have started in 2026.

“The rejection of this contract by the government and Engie is a new explicit recognition of the climatic, environmental and social ravages of shale gas,” Lorette Philippot, private finance campaign manager of French environmental group Les Amis de la Terre (Friends of the Earth), told NGI.

“Whatever the outcome of tonight’s (U.S. presidential) election, we expect France to pursue a consistent policy of zero tolerance for unconventional hydrocarbons,” said Phillipot, whose group urged the government to reject the proposed Rio Grande deal. “This requires refusing to import and consume shale oil and gas, just as we refused to produce it nearly a decade ago.”

The group also called on French bank Societe Generale SA to stop working on the project. In May 2017, NextDecade appointed Societe Generale and Macquarie Capital Inc. as financial advisors.

A group of 20 U.S. House of Representatives members on Monday sent a letter to French President Emmanuel Macron saying the government had “unfortunately intervened” to nix the Engie deal “on a misinformed assumption that U.S. shipments are supposedly more greenhouse gas (GHG) intensive from a life-cycle perspective than other foreign gas supply.”

The legislators asked the French government to reconsider the “ill-informed decision, which we believe is detrimental to our joint energy security goals and efforts to reduce GHG emissions.”

The letter said that “our official government analysis” shows that U.S. LNG exports to the European Union, including France, “result in fewer emissions than some of the largest exporters of natural gas to France, including Russia and Algeria.”

The House members thanked Macron for his “thoughtful reservations” about completion of the controversial $11.2 billion, 5.3 Bcf/d Nord Stream 2 pipeline that would traverse the Baltic Sea from Russia, to Greifswald, Germany.

The representatives added that they have “deep concerns” that Russia is using non-governmental organizations “to influence the decision-making process in Paris” to block initiatives designed to reduce European reliance on Russian energy exports.