Oil production is on the rebound in the Powder River Basin (PRB), thanks to horizontal drilling and hydraulic fracturing (fracking), the U.S. Energy Information Administration (EIA) said, with production more than doubling over a nearly five-year period. 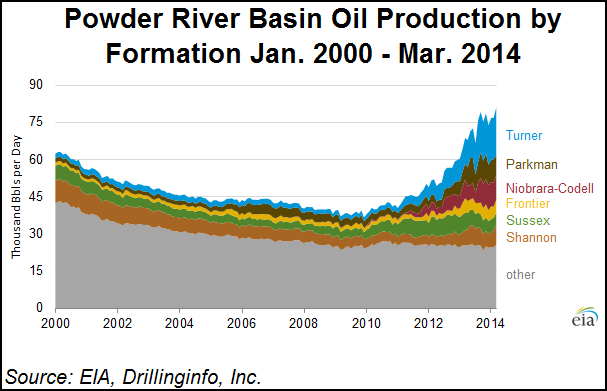 In a “Today in Energy” brief released Monday, the EIA said oil production in the PRB — an area more than 43,000 square miles located primarily in northeast Wyoming and southeast Montana, with smaller portions in South Dakota and Nebraska — hit a low of 38,000 b/d in 2009, but increased to 78,000 b/d during the first quarter of 2014.

The agency attributed most of the increase to production growth in the Turner, Parkman, and Niobrara-Codell formations, which collectively increased from 4,700 b/d in 2009 to 36,300 b/d in 1Q2014. Collectively, the three formations accounted for 46% of PRB oil production in 1Q2014, compared to 12% in 2009.

The EIA said oil production in three other formations — Shannon, Sussex and Frontier — also increased during the same time frame, from 8,900 b/d to 17,000 b/d. The latter three formations accounted for 23% of PRB oil production.

“The recent resurgence is occurring predominantly in the Wyoming portion of the basin, which is also the main source of the basin’s historical oil production,” the EIA said. “Since January 2009, more than 590 oil wells have been drilled and completed in the six select formations within the PRB, with this activity centered in Wyoming’s Converse and Campbell counties.”

The EIA added that in the past, oil production mostly came from higher-permeability areas of the play in Wyoming’s Turner, Parkman, Shannon, Sussex, and Frontier formations. But with the advent of horizontal drilling and fracking, larger parts of the aforementioned formations are becoming profitable for oil drilling.

“In contrast, the Niobrara-Codell formation was not a significant oil producer in the PRB before 2009, and oil production from this formation is entirely reliant on the application of current petroleum technology,” the EIA said.

Several oil and gas companies have expanded their presence in the PRB this year.

In August, SM Energy Co. increased its 2014 capital expenditure budget, with a large part going toward acquisitions and accelerated activity in the PRB, including a drilling program targeting the Frontier formation (see Shale Daily, Aug. 19).

New infrastructure has been coming to the play as well. In June, an initial shipment of crude oil from the PRB departed the new Black Thunder oil rail terminal in Campbell County, WY (see Shale Daily, June 23). Earlier this month, Enterprise Partners LP kicked off a binding open season for capacity on its proposed 340,000 b/d Bakken-to-Cushing crude oil pipeline, which would carry crude from the PRB (see Shale Daily, Sept. 8).