Less than half (44%) of Americans say they are familiar with hydraulic fracturing (fracking) and among them, 44% oppose it while 42% said they support fracking, according to the latest University of Texas at Austin (UT) Energy Poll. A majority of respondents said cities should have the power to ban fracking within their borders. 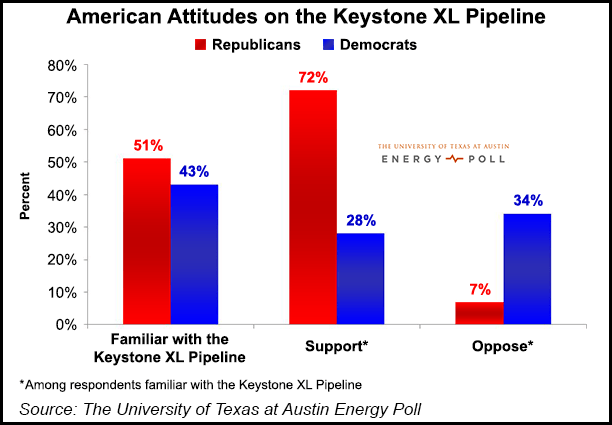 The latest UT Energy Poll is the first to find that more respondents oppose fracking than support it. Two years ago, fracking had support among 45% of poll respondents, but that was down from 48% in the prior year (see Shale Daily, April 11, 2013). As in previous surveys, the responses fall out along political lines. Among survey respondents familiar with fracking, 65% of Republicans support it, compared with only 28% of Democrats.

“Support for hydraulic fracturing on public lands also has declined,” researchers said. “Among survey respondents familiar with the practice, 42% say its use should be banned on public lands, compared with 34% a year ago.”

The poll showed “strong support” for allowing cities to ban fracking, even if state law permits it otherwise. Among respondents familiar with fracking, 58% said cities should be permitted to outlaw its use, while only 25% said municipalities should not have the authority to ban it locally.

“At present, it appears a large majority of Americans think cities should have the right to decide if they want to ban fracking locally,” said UT Energy Poll Director Sheril Kirshenbaum.

The poll also found that 70% of respondents say climate change is occurring. This includes 86% of Democrats and 47% of Republicans. And support for the Keystone XL pipeline fell out along political lines, too, with 72% of Republicans familiar with the project saying they favor it compared with 28% of Democrats.

Overall, less than half (42%) of the 2,078 survey respondents are familiar with Keystone XL, the final segment of a pipeline system that runs from Western Canada to refineries along the Texas Gulf Coast. Construction of the last phase, which has yet to be approved, has become a lightning rod for contentious public debate.

Nearly two out of three Republicans (62%) said they would be more likely to vote for a political candidate who favors completion of Keystone XL, compared with 29% of Democrats surveyed. But overall support among survey respondents for candidates who favor construction of the pipeline has declined, from 46% six months ago to 39% today.