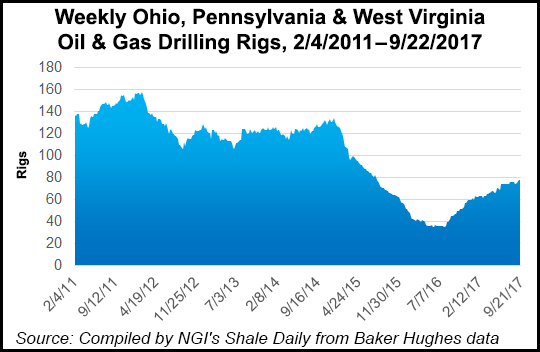 Mississippi-based Shale Support said its activity has been increasing in the Marcellus and Utica shales over the last year. Tidewater operates a transloading and dry storage facility in southeastern Ohio’s Jefferson County, where sand can be stored and loaded for distribution throughout the basin.

Shale Support said that it expects to soon begin shipping the proppant in 80-100 unit Norfolk Southern Corp. trains on a single rail line from its mine in Mississippi to Tidewater’s facility in Ohio. Transit time is expected to take four days, increasing efficiency and cutting delivered costs.

Shale Support started delivering its first loads of proppant in the Eagle Ford Shale of Texas in early 2013 and has since expanded to the Haynesville and Tuscaloosa Marine shales, the Permian Basin and Appalachia. In addition to the six transloading facilities it operates across the country, Tidewater offers terminal consulting, logistics and supply chain management services.

Shale Support President Jeff Bartlam said the Tidewater partnership is aimed at getting sand to Appalachian producers faster, which has increasingly become a challenge as operators pump more proppant to complete wells.

There were 78 rigs running across Ohio, Pennsylvania and West Virginia at the end of last week, versus 45 total at the same time a year ago, according to Baker Hughes Inc.