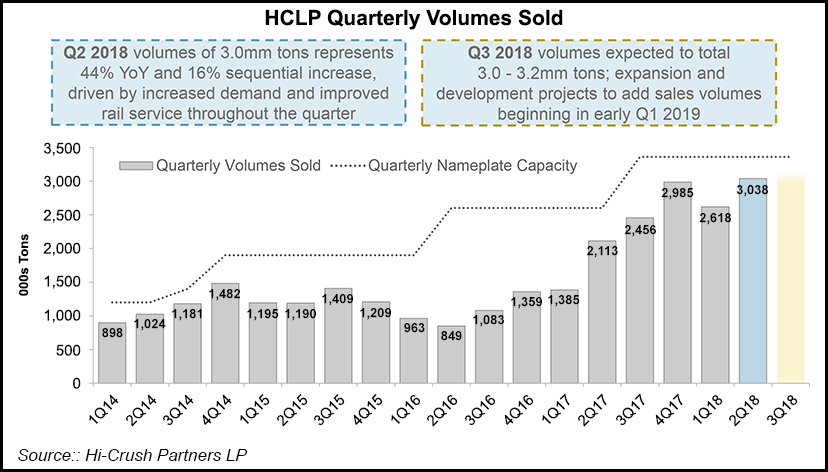 Some of the country’s largest frack sand suppliers, including U.S. Silica Holdings Inc., Hi-Crush Partners LP, Emerge Energy Services LP and Carbo Ceramics Inc., all reported higher revenue for 2Q2018. They also are making moves to improve their last-mile logistics, ensuring proppant is delivered as efficiently and cost-effectively as possible.

While overall sand volumes are higher, the company is exiting the resin coated sand (RCS) business, which primarily served the oil and gas market. Some tout RCS as superior to other sand products in producing more oil and gas in completions. It is usually higher priced, which has led many producers pumping more proppant into longer lateral wells to rely instead on northern white sand and similar products.

The decision to withdraw from RCS is “based on customer feedback that demand for this type of product is rapidly declining,” Shinn said. “This has been a very small business for us and we don’t anticipate any impact to earnings beyond the impairment charges in the second quarter.”

The company expects to continue to benefit from strong demand in the oil and gas business for sand and its proprietary Sandbox system.

“We are heavily contracted in this market at attractive margins and are well positioned to serve our blue-chip customer base in the years ahead,” Shinn said.

What customers want is in-basin sand, when possible, he said. That’s become a big trend in the Permian Basin, where myriad operators are expanding their proppant systems.

By the second half of 2019, “I think we could see maybe 50-60% of the Permian demand being supplied locally,” Shinn said.

However, he cautioned that Permian sand isn’t the same as northern white sand. What’s been “missed by a lot of folks is that there’s a cost curve in the Permian, just like there was for northern white mines. And we believe that there’s easily a difference of, let’s say, $5-10/ton on a delivered basis between the advantaged mines and those that are disadvantaged. We tend to think of it internally in terms of Tier 1 local mines and Tier 2.

“The Tier 1 mines have those advantage logistics that are at the bottom of the cost curve with multiple water sources. The company has the technical know-how to operate the facility.”

U.S. Silica categorizes sand mines that way to “get a sense of who’s advantaged, who’s going to be long-term more profitable in the industry versus the others.”

The company, he said, is “right at the bottom of the cost curve, an advantage from a delivery and logistics standpoint…I think others who made different choices out of the basin perhaps will be more challenged, but we feel like we’re in really good shape.

U.S. Silica sold 3.465 million tons of sand for oil and gas operations between April and June, a 26% increase from a year ago and 7% higher than in the first quarter. Nearly two-thirds of the tons sold were in-basin, flat from the first three months.

During the third quarter, “we expect volumes in oil and gas to be up in the range of 20% to 25% as we ramp our new capacity in West Texas and bring our brownfield expansion projects fully online,” Shinn said. “We expect to sell up to 80% of our total oil and gas volumes under long-term supply agreements.”

Houston-based Hi-Crush in July advanced the last-mile concept with a triple shot of expansions, including the takeover of a Manitoba-based, silo-based sand storage business and build out of proppant operations in Wisconsin and the Permian Basin.

“Our strong financial results reflect our expanding capabilities and the investments we have made throughout the cycle, particularly in frack sand logistics,” said CEO Robert E. Rasmus. The acquisition of FB Industries, executing an amendment to an existing supply agreement with a major producer in the Permian, and the related contract-backed expansion of northern white sand and in-basin Permian capacity, give evidence to “our commitment to investing in our future to further improve our operating results and cash flow.”

Among other things the Houston company’s PropStream logistics system, which, like U.S. Silica’s Sandbox, is designed to transfer proppant from in-basin terminals to the well site for fracking operations, continues to gain steam.

At the end of the second quarter, Hi-Crush had 14 PropStream crews all together working in the Permian and Appalachian basins, a two-crew gain from the end of March. In July 15 PropStream crews were working, and Hi-Crush still expects to have more than 20 crews deployed to exploration and production (E&P) sites by the end of 2018, in line with previous guidance.

“Our PropStream last mile logistics service continues to gain market share with customers we are targeting, which are the end users of sand, the E&Ps,” Rasmus said. “Our sales volumes sold directly to E&Ps are increasing, and we fully expect that over the near- and medium-term, more E&Ps will continue to request direct-sourced arrangements with proppant suppliers.”

Operations also benefited, he said, “from an improvement in Class-1 rail service and less railroad congestion in the second quarter of 2018 relative to the first quarter.”

Average sales prices declined to $70/ton from $73 in 1Q2018, a result of an increase in volumes sold at the mine gate.

Volumes sold at the terminal or the wellsite :are generally expected to grow over time as customers increasingly prefer landing sand closer to, or at, the wellsite,” Rasmus said.

Fort Worth, TX-based Emerge sold a record 1.6 million tons of sand in the second quarter, a 6% increase sequentially. However, work has slowed down because of Permian Basin takeaway constraints.

“Compared to the second quarter of 2017, our total volumes sold increased by 14%,” said general partner Chairman Ted W. Beneski. “The rail service for our Wisconsin operations improved moderately during the quarter. And our BNSF direct outlet continues to handle a heavier workload. Our Texas operations exhibited a growth in sales and production with both Kosse and San Antonio reaching higher production levels.”

Net revenues fell y/y because of “higher priced, terminal sales volumes,” with volumes sold through terminals totalling 26%, versus 39% in 1Q2018.

Beneski credited better margins for the quarter to higher sand prices, an increase in in-basin sales at the San Antonio and Kosse plants in Texas and lower logistics costs.

However, while “demand for frack sand remains healthy,” Emerge “experienced a minor slowdown to finish the second quarter, and the softness has partially continued into early third quarter.

“Conversations with our customers indicate that the conditions are temporary given the Permian takeaway constraints,” Beneski said. “However, we acknowledge that the frack sand industry faces a state of transition with the utilization of new in-basin plants increasing throughout the year.”

Emerge signed several new take-or-pay customer contracts for its Eagle Ford Shale in-basin sand operations that would be supplied through its San Antonio plant. A New Source Review permit needed to expand the plant to 4 million tons/year of sand “has gone very smoothly. So, we’re expecting to receive our new permit by late August, which is ahead of the previous year and guidance.”
Emerge also has a new in-basin operation planned for Kingfisher, OK, to serve operators working in the stacked reservoirs. Work continues on permitting the sand facility, with ground expected to be broken next month.

“With the 1.5 million tons of new capacity at this plant, our total in-basin capacity will be 6.1 million tons, or approximately 50% of our total frack production capacity,” Beneski said.

CEO Rick Shearer said the proppant industry “is in a state of transition, with customers demanding in-basin product in the Permian, Eagle Ford and Midcontinent basins, and the announced in-basin plans are ramping up utilization.

“However, customer interest in northern white sand remains resilient, and we’re continuing to move significant amounts of northern white product into all the major basins. We expect to weather any disruption in northern white given our strong logistics capabilities into multiple basins across North America.”

Houston-based Carbo, which was suffering as E&Ps took a pass on its RSC proppants to use less-expensive frack sand, launched a turnaround with a goal to boost its technology offerings. The result was a 33% increase in second quarter revenue y/y and a 17% sequential jump to $58 million.

“Our results continue to improve as we execute on our transformation strategy to diversify our revenue streams and return the company to profitability,” said CEO Gary Kolstad.
Oilfield sector revenue grew by one-third from a year ago “and comprised approximately 80% of consolidated revenue. Oilfield technology ceramic revenue grew 61% year-on-year.”
The oilfield business unit gains in part came from “healthy ceramic technology product sales,” geared by sales of its proprietary Kryptosphere.

“We continue to be successful in reducing our reliance on base ceramic. Base ceramic sales made up approximately 80% of our revenue in 2014 compared to approximately 20% year-to-date.”