Several states that produce large amounts of fossil fuels rely heavily on severance tax revenue, but Pennsylvania hasn’t received as large a revenue boost as might be expected from the wellhead fee it imposes on it’s massive Marcellus Shale production, according to the Energy Information Administration (EIA). 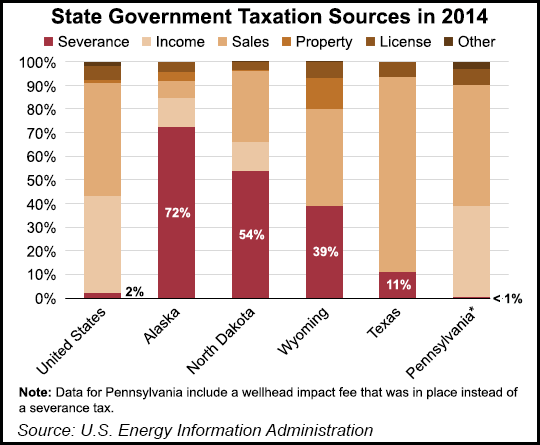 In North Dakota, the second-largest oil producing state, the reliance on severance tax revenues has increased side by side with the growth of tight oil production in the Bakken region. The state’s oil production increased from 87,000 b/d in 2001 to 1.1 million b/d in 2014, with severance tax receipts over the same period growing from $164.6 million to $3.3 billion, EIA said. And severance taxes, which accounted for 14% of state tax revenues in 2001, increased to 54% in 2014. EIA said 1Q2015 severance tax receipts of $442 million were half of the North Dakota’s all-time high of $982 million reported in 3Q2014. In response to low oil prices, North Dakota passed legislation this year to reduce the oil extraction tax to 5.0% from 6.5% beginning in January and repealing statutes that trigger severance tax reductions when oil prices stay below a reference price of $55/bbl.

The country’s second-largest natural gas-producing state, Pennsylvania derives revenue from an annual fee based on the number of wellheads drilled and the wholesale price of natural gas. Revenues from those impact fees have been relatively flat in recent years, increasing from $202 million in 2011 to $226 million in 2014, despite significant production growth in the Marcellus region, EIA said. “This result was because horizontal fracturing techniques yielded increasing natural gas per well and prices remained low,” according to the agency.

Lawmakers in the Pennsylvania General Assembly and Gov Tom Wolf are at loggerheads over the merits of enacting a severance tax on oil and gas production (see Shale Daily, July 21; July 7; June 29). Severance tax legislation under consideration by the lawmakers would require oil producers to pay a severance tax of 5% of the production value of oil and natural gas, which would generate up to $1 billion in tax receipts, according to EIA.

“On average, severance taxes accounted for less than 2% of state tax collections in 2014, but in three states — Alaska, North Dakota, and Wyoming — severance taxes provided a much larger share of total state tax revenue in that year,” the agency said. Pennsylvania currently derives less than 1% of its revenues from its wellhead fee.

Alaska is at the opposite end of the spectrum, relying on revenues from oil and natural gas production for up to 90% of its budget. The Alaska Clear and Equitable Share Wellhead tax is calculated at 25% of operators’ net income (revenues after operating expenses and capital expenditures) before adjustments and credits. Fluctuations in tax receipts that reflect Changing oil and natural gas prices can have significant impacts on the state’s tax receipts: Alaska lost $5 million in severance tax revenues in 1Q2015 as production companies reported negative net income because of falling oil prices and the application of tax credits.

In Wyoming, the nation’s foremost coal-producing state, it’s natural gas that has been the largest source of severance taxes since 2000, EIA said. “High crude oil prices and increases in production elevated crude oil to the second-largest source of severance tax receipts in fiscal year 2014,” the agency said. “Wyoming state and local governments also derive revenue from property taxes, with coal, oil, and natural gas totaling more than 50% of state-assessed valuation.”

Republican leaders from the Ohio House of Representatives and Senate recently announced the formation of a joint legislative task force to work toward a compromise to increase that state’s severance tax on unconventional oil and natural gas production (see Shale Daily, June 16).

The general assembly has been debating an increase in the severance tax for years without a solution, as production from the Utica Shale has continued to increase. In February, Republican Gov. John Kasich proposed taxing unconventional oil and gas volumes at a rate of 6.5% (see Shale Daily, Feb. 3). Since taking office in 2011, Kasich has proposed several severance tax increases ranging from 1.5% to 4.5%. Neither the House nor the Senate, however, included his proposal in their versions of the state budget, focusing instead on a more modest income tax cut and fewer tax reforms.