A jittery natural gas market bracing for a winter of extreme pricing turned in a week of volatile trading for the Sept. 30-Oct. 6 time frame, but forward prices trended lower overall as mild weather and rising stockpiles soothed nerves over the domestic supply situation. 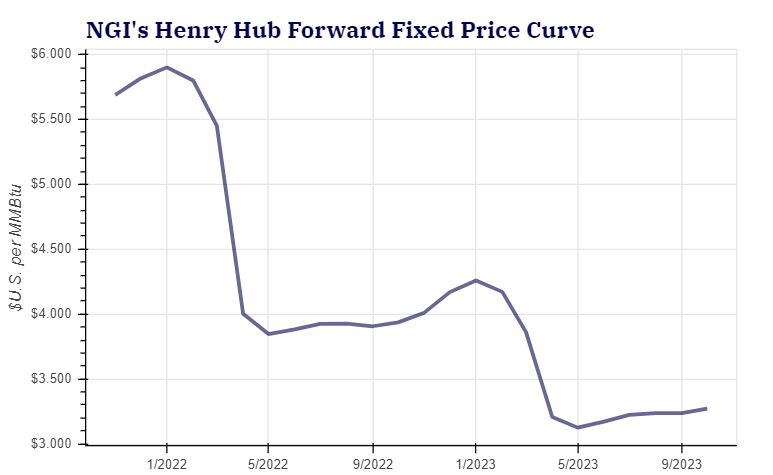 Forward prices at most trading locations took their cues from Henry Hub, where November prices fell 19.2-cents during the period.

However, the week/week change for Henry Hub barely begins to tell the story of a wildly volatile stretch for natural gas prices both at home and — perhaps more significantly when it comes to explaining minute-to-minute swings in the market — abroad.

Over the past week Nymex futures have whipsawed between lows in the $5.50-5.70 neighborhood and highs within arm’s reach of $6.50. On Wednesday, the prompt month visited both extremes in the span of one session, plunging 63.7 cents to settle at $5.675 after posting an intraday high of $6.466.

The November Nymex contract settled at $5.677 Thursday, a day/day change of less than a penny even as the intraday trading range spanned nearly half a dollar.

The U.S. Energy Information Administration (EIA) on Thursday reported a higher-than-expected 118 Bcf injection for the week ended Oct. 1, though the market seemed to have anticipated a plump build given prices ultimately held their ground on the day.

The easing tension in domestic balances evidenced in the latest inventory data comes as forecasts have been seemingly unwavering in their expectations for exceptionally mild October temperatures.

“We expect weather patterns will remain solidly bearish into late October, when more impressive cold fronts will finally attempt to push into the Midwest and East,” though it remains to be seen “if they will have much success,” NatGasWeather said.

The inventory deficit to the five-year average could shrink to minus 125 Bcf once the next two EIA reports are taken into account, the firm said. The more time that passes before “widespread freezes” arrive in the United States, the more comfortable the supply situation will look going into the withdrawal season.

Still, the mild weather and less constricted supply outlook domestically have only done so much to ease fears given a backdrop of potentially dire circumstances overseas this winter.

“We anticipate continued volatility for winter trading, with Henry Hub now appearing largely untethered from short-term fundamentals-based pricing,” Energy Aspects wrote in a recent note to clients. “Several weeks of mild weather to start the heating season should provide enough of a cushion to allay acute storage adequacy concerns, however.

“As the market is still in the so-called ‘expectations phase’ of winter — before there is a single day of cold weather or even a 15-day weather map covering the start of the season — we anticipate any shift in fundamentals will induce a knee-jerk reaction and that Henry Hub will continue its recent correlation” to the Dutch Title Transfer Facility (TTF) benchmark “while the risk of gas rationing pricing remains on the table,” the firm continued.

The bullishness overseas “has had comparatively more fundamental drivers” versus Henry Hub, but the European gas market “also has no clear price anchor,” according to Energy Aspects. “That leaves Henry Hub exposed to an even higher degree of volatility than it otherwise would be in a winter when gas stocks have the risk of falling short.”

A cold start to winter heating demand could lead to “gas rationing pricing” early in the heating season as players look to preserve fuel for later in the winter, the firm said. On the other hand, an early winter in line with mild November 2020 demand levels would leave the market with “some 150 Bcf more in end-March inventories to bring them to 1.7 Tcf.”

‘Difficult to Imagine A Way Out’

The “gas-rich” market in the United States faces undersupply this winter, but probably not to the extent of causing the kind of reliability issues “already emerging abroad,” RBN Energy LLC analyst Lindsay Schneider said in a recent blog post.

Still, exposure to the global market via liquefied natural gas (LNG) exports has been enough to send Henry Hub soaring to record highs, the analyst noted.

“This is by no means the first time various markets have faced considerable imbalance,” Schneider said. “In fact, last year at this time we were coming out of a period of widespread oversupply and record-low gas prices. But it’s certainly foreboding that it’s not even winter yet, and prices are skyrocketing to new heights.”

How high prices go this winter will heavily depend on weather, Schneider said. Given the fear in the market heading into winter, the season’s first cold snap could “send gas prices at home and abroad to the moon.”

This winter prices will be “especially vulnerable” to extreme spikes in the event of a domestic supply crunch that leads markets to price gas high enough to incentivize the power sector to turn to other fuel sources, according to Schneider.

“If Henry Hub is high enough to turn on expensive oil generation across the country, what does that mean for LNG exports?” the analyst said. “If U.S. exports shut in because of either high prices here or lack of available gas, that puts international markets in an even worse position. The spiral continues, and unless something dramatically changes, it’s difficult to imagine a way out before winter’s end.”

In terms of major basis moves during the Sept. 30-Oct. 6 trading period, the exorbitant premiums at SoCal Citygate accounted for the largest week/week swing in the market, this time in favor of Southern California buyers.

“The Needles-to-Citygate spread collapsed in cash, narrowing from $1.94 on Sept. 30 to 40 cents on Oct. 5 (Tuesday) due to an increase of receipt capacity in the Needles Subzone, allowing more gas to reach SoCal Citygate,” Wood Mackenzie analyst Quinn Schulz wrote in a recent note to clients.

The recent spread between SoCal Border Avg. and SoCal Citygate remained above the cost of transportation between the two locations, indicating the market is still pricing in potential winter constraints, according to the analyst.

Forward pricing for SoCal Citygate “reflects that the risk premiums gained” after the recent explosion on El Paso Natural Gas Line 2000 “have been diminished, as a structural return of import capacity in the region effectively reduces some of the supply chain risks ahead of winter,” Schulz said.

Elsewhere in the western third of the Lower 48, basis premiums at a number of hubs in the Rockies and Pacific Northwest eased noticeably week/week. Northwest Sumas basis for November delivery tumbled 46.4 cents to trade 89.5 cents ahead of Henry Hub, while Malin eased lower to end the period at a 35.6-cent premium to the national benchmark, a 38.3-cent discount from a week earlier.

Algonquin Citygates November basis shed 24.9 cents week/week but remained at a hefty $3.269 premium to Henry Hub. Tennessee Zone 6 200L basis fell to plus-$3.248, a 24.7-cent discount versus the week-earlier period.