The summer topic du jour in U.S. natural gas markets seems to be the long-awaited opening up of Marcellus Shale gas to major market centers around the country, with a big jolt coming from the opening of the large Rockies Express Pipeline to East-to-West volumes expected Aug. 1. 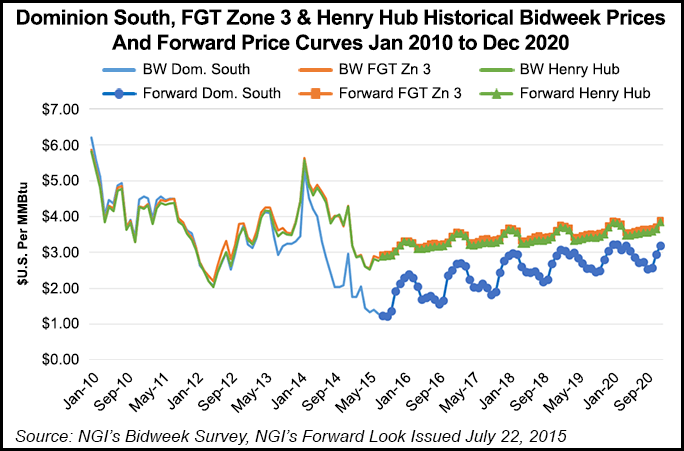 As that gas rushes out, what will happen to prices in the Northeast? Will Marcellus gas displace gas from other areas, such as the Rockies and Gulf producing region? Questions like these have sparked numerous debate, many drawing the conclusion that the tidal wave of gas could dampen prices as far south as central Florida and even the Henry Hub in Louisiana.

Many expect the difference between Marcellus gas prices and those elsewhere to narrow. Few would dispute that Marcellus gas prices, hampered by a lack of takeaway capacity, are depressed compared to other areas of the country. The question is whether the narrowing of the discount would be because of collapsing prices in the Gulf resulting from new Marcellus supply displacing it from its Midwest and eastern destinations, or rising prices in the Marcellus stemming from new capacity out of that region. Although many have argued that the collapse of Gulf prices is imminent, that may not be the case.

Forward markets, it turns out, seem to be expecting all boats will be rising, although the Marcellus will be rising faster, thereby narrowing the gap, according to NGI Markets Analyst Nate Harrison. Using Dominion South as a proxy for Marcellus prices, it is possible to compare forward market expectations in the Appalachia with those of Gulf Coast points, such as Florida Gas Transmission’s (FGT) Zone 3 and the Henry Hub.

To put this in context, it helps to remember that Dominion South traded at a premium to Gulf markets as recently as April 2013, until cheap Marcellus gas forged a discount that has been as high as $2.02 in the bidweek markets. The forward curves indicate that some market participants are expecting a return of the Appalachia’s former glory. As Pat Rau, NGI director of strategy and research, explains, “History and past relationships usually impact trading decisions, whether they be commodities, equities, fixed-income, etc.

Rau stressed that this view only looks at Appalachia, while holding the Gulf Coast constant. “Things are happening in the Gulf Coast as well, which could help weaken prices in that region. If the two REX east-to-west expansion projects back up gas into the Gulf, which some pundits are predicting will happen, that won’t help prices in that region. I’m also of the opinion that gas demand in the Gulf probably won’t increase at the pace that quite a few publicly traded E&P and nat gas midstream companies would have you believe in their investor relations presentations.”

Observ Commodities’ Wei Chien said in a recent white paper that “Marcellus production seeping into the Midwest has displaced imports from the Gulf. This in turn drove the faster-than-normal injection pace in the producing region this summer. Instead of flowing to the Midwest, such portion of Gulf production goes straight into storage. As more Marcellus production reaches the Midwest via REX’s East-to-West Expansion project, more gas will be pushed back to the Gulf.”