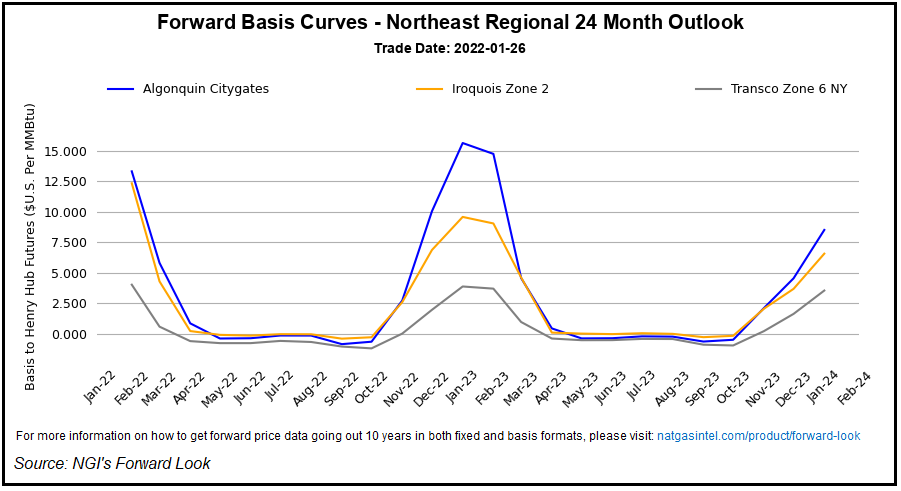 Nymex futures on Thursday turned in what Bespoke Weather Services called “one of the wildest contract expirations in natural gas history, if not the wildest.”

The February contract posted an eye-popping $1.988 rally in its final day of trading on comparatively small volume, settling at $6.265. The March contract, meanwhile, picked up 24.7 cents to settle at $4.283.

The expiring February contract could have settled even higher. Prices rocketed north of $7 during the session as traders felt “a major squeeze due to fears about upcoming colder weather,” Bespoke said. “…It is worth noting that most traders are in the March contract at this point, which was much more tame.”

Afternoon data from the European model trended colder over the northern half of the Lower 48 for next Wednesday through Feb. 10, according to NatGasWeather. This marked a “big step” toward closing the gap on the colder American modeling, the firm said.

The Energy Information Administration (EIA) storage report on Thursday “confirmed a tight balance when weather patterns cooperate, and they will continue to do so much of the next two weeks” aside from a “milder break” during the first three days of February, NatGasWeather said in a note to clients Thursday.

A reported 219 Bcf withdrawal from U.S. natural gas stocks for the week ended Jan. 21 lowered inventories to a 1.0% deficit versus the five-year average of 2,616 Bcf, EIA said.

Prior to EIA’s latest weekly report, EBW Analytics Group had cautioned in a note to clients that the market could be “underestimating near-term fundamental strength.” EBW senior analyst Eli Rubin estimated that the next four storage reports, including Thursday’s, could see stockpiles “rapidly” flip from a small surplus to a 250 Bcf year-on-five-year deficit.

“Still, historical price action suggests downward pressure for March absent extreme weather, while the next 30-45 days are likely to see moderating weather and rebounding production,” Rubin said. “We believe gas prices remain likely to decline, but downward pressure may be postponed until mid-February.”

Bespoke similarly observed the potential for futures to recede as March takes over as the prompt month. Price action following Thursday’s wild rally will depend “largely” on weather trends.

“At this point, given that the risk of a major cash blow-up in March is much lower than in February, it will require a lot of cold to keep the March contract at this level,” Bespoke said.

Tropical forcing in the latest modeling Thursday suggested a “risk of turning milder after the first week or so of February,” though “confidence remains low,” the firm added.

The domestic futures market wasn’t the only one to experience volatility during the week.

Dutch Title Transfer Facility prices, after resisting downward pressure in recent weeks, “surged back to more than $30/MMBtu,” Rystad Energy senior analyst Wei Xiong said in a recent note. Prices there have been “lifted by bullish impetus from Russia-Ukraine tensions, which show no sign of abating — a geopolitical uncertainty which commodity markets are struggling to price in.”

The tensions are “stoking fears of a prolonged period of scarce Russian exports to Western Europe this year, even as European storage — now at 42% capacity — races to the bottom,” Xiong added.

The continent has seen “robust” imports of liquefied natural gas (LNG) that have helped to “offset some of the bullish momentum from other factors and keep prices in check,” the analyst said.

Rystad estimated around 7.95 million metric tons of LNG imported by Europe month-to-date, with the United States supplying close to 46% of that total.