Permits have been issued in 40 cities and counties across California under new building code restrictions for natural gas, according to the state regulators. 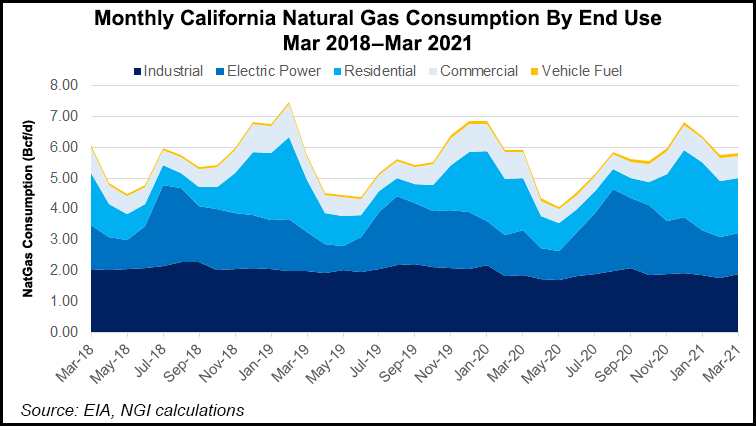 Restrictions vary within each jurisdiction, with exemptions for restaurants, laboratories, emergency shelters and others, the California Energy Commission (CEC) said. Longer term, CEC engineers plan to use data on the permitting to calculate future annual gas demand forecasts.

“They plan to look at ordinances that involve mostly new construction and how different exclusions of end-uses play into demand,” spokesperson Amber Beck told NGI.

This year through April, Los Gatos, Oakland, Santa Rosa and Sunnyvale in the San Francisco Bay Area each have issued more than 70 permits, according to the CEC.

San Jose’s ban goes into effect on Aug. 1. It will affect most construction except hospitals and attached accessory dwelling units, as well as some restaurants, manufacturing facilities and facilities with distributed back-up energy resources, according to city spokesperson Cheryl Wessling.

San Jose’s permit staff does not track “all electrical” or “no gas installation” in its system, Wessling told NGI. “However, they are working on adding new identifiers to the system to enable this kind of data.”

The CEC ultimately approves most local building code changes. However, jurisdictions approve each of the permits and maintain statistics. “We don’t have specific information on what the permits include or about the extent of traditional gas piping in new construction,” Beck said.

Most ordinances only apply to residential buildings. Still, a dozen jurisdictions in the Bay Area also have provisions for commercial developments. Four are in Central and Southern California — Los Angeles County, San Luis Obispo, Santa Monica and West Hollywood.

“The local jurisdiction lays out which buildings their local ordinance will apply to,” Beck said. For example, the city of Albany states that its “requirements create a baseline for new single-family and multi-family residential, and new nonresidential construction, while another applies to the development of new single-family homes, detached accessory dwelling units, and multifamily buildings up to three stories.”

To track permit data, the CEC is relying on private sector sources at the California Homebuilding Foundation and the Construction Industry Research Board (CIRB). The CIRB is a research arm of the California Building Industry Association. It does not track all-electric permits, but is focused more on electric vehicle charging equipment, according to research director Joe Sanchez.