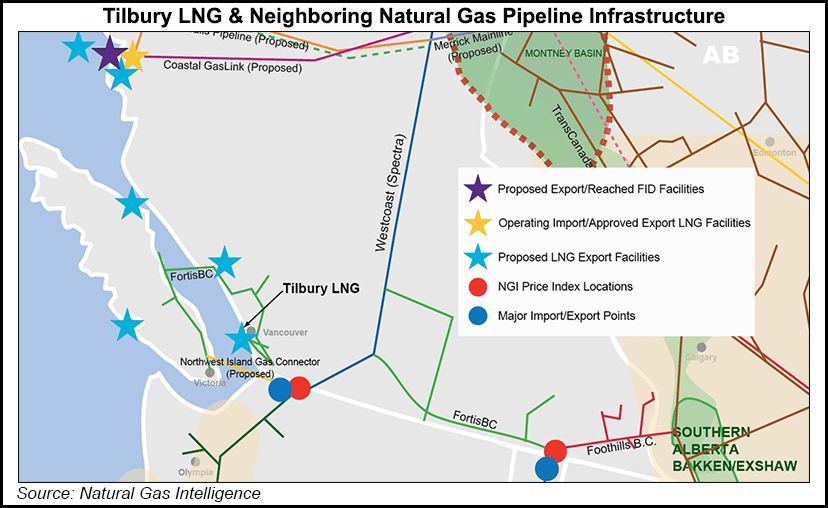 FortisBC, a gas distributor with 1.1 million customers in the region, has filed a C$3 billion ($2.3 billion) LNG expansion plan with the BC Environmental Assessment Office (BCEAO) and the Impact Assessment Agency of Canada (IAAC).

The project would install new capacity for 3.5 million metric tons/year (mmty) of LNG per year, or about 455 MMcf/d, by 2028 at a 49-year-old FortisBC waterfront gas plant called Tilbury in Delta, a Vancouver suburb studded with industrial sites.

The statement refers to a rupture, explosion and fire that cut in half 2 Bcf/d that flows to the B.C. and United States Pacific coast on Enbridge Inc.’s Westcoast Energy pipeline from northern gas production fields.

The interruption caused prolonged supply shortages and steep price hikes that prompted a review of “resiliency and operational flexibility within our system,” says FortisBC.

While the current Tilbury facilities additions only use established gas pipeline service from northern BC, the new growth program may require expansion by Enbridge’s Westcoast network.

“Vancouver is well positioned to be an LNG marine bunkering hub as ship owners are increasingly moving to LNG-powered ships in order to meet stringent International Marine Organization emission regulations that came into force in 2020,” says FortisBC.

“Availability, price, quality, and infrastructure are all critical to creating this cleaner fueling hub that will allow additional coastal vessels and trans-Pacific shipping companies to commit to securing new vessels powered by LNG instead of bunker or diesel oil.”

The expectations for fueling seagoing ships are built on early local successes. “Marine operators including BC Ferries and Seaspan Ferries currently operate LNG fueled vessels and are planning to expand their fleets,” reports the expansion proposal to the BCEAO and IAAC.

“FortisBC is also providing LNG and compressed natural gas as fuel for on road transportation customers including trucking fleets, waste haulers and bus fleets, helping them transition to a lower emission fuel.”

FortisBC has also had an early taste of export success by supplying LNG container shipments to True North Energy, a trading firm that made its first delivery last December to a Chinese industrial niche market that is switching fuels to gas from coal.

“Demand for cleaner burning fuels is growing globally as new emission regulations come into force,” says FortisBC. “Countries like China are shifting their fuel mix away from coal and oil in order to reduce their GHG emissions and to improve their air quality and health outcomes.”