Concern is growing in Mexico over supplies of natural gas to industry, and the leader of the powerful lobby of Monterrey industrialists, Juan Ignacio Garza, told the daily Reforma on Thursday that “a perfect storm” is brewing in the country. 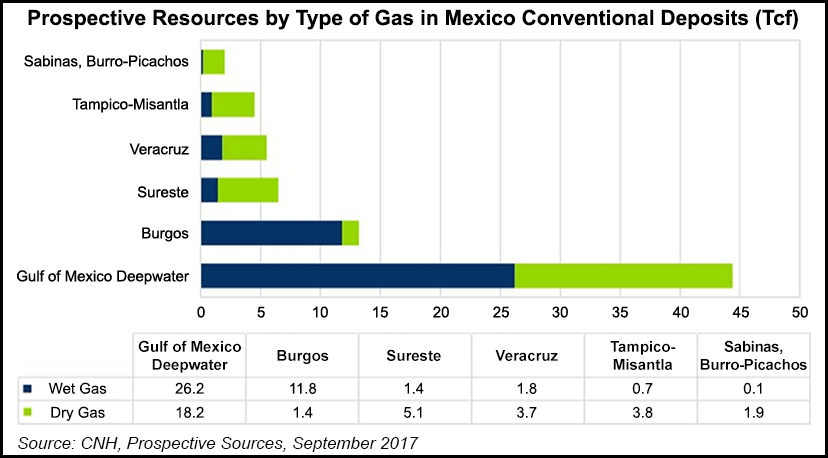 He said while gas production by state-owned Petroleos Mexicanos (Pemex) is falling, so too are imports from the United States, largely because of community protests against pipelines, and liquefied natural gas imports have consequently doubled.

The upcoming conclusion of the undersea Sur de Texas-Tuxpan pipeline between Texas and Mexico is critical, Garza said. If it is delayed, problems will only grow worse, he said.

Ironically, however, Mexico has more natural gas resources than the United States in per capital terms, Hector Moreira, a member of the upstream regulator, Comision Nacional de Hidrocarburos (CNH) explained recently at the presentation on the nation’s natural gas sector.

Of prospective resources, by far the largest are those in the Gulf of Mexico (GOM) deepwater, with about 43 Tcf, of which about 40% is dry gas. However, the resources remain untapped.

Burgos Basin, across the border from Texas, has prospective resources of around 13 Tcf, about 90% of which is wet gas. Shortly ahead of the CNH publication, Adrian Lajous a director-general of Pemex from 1994 to 1999, published a long article on the same theme for the intellectually heavyweight magazine Nexos.

Lajous is unlike any other Pemex chief, before or after. He has many years of experience, while almost all the rest had none at all. A doctor in economics, he worked for the refining division of Pemex for several years until he was pulled out of it to replace Carlos Ruiz Sacristan.

Even by Pemex standards, Ruiz Sacristan’s reign at Pemex was spectacularly brief. Having been appointed on Dec. 1, 1994, he was replaced by Lajous before end of the month.

Ruiz Sacristan, having fulfilled his duties with Zedillo, was hired by what was then Sempra Energy’s Mexico unit, now known as IE Nova SAB de CV, where he is now chairman. Ruiz Sacristan was probably the shortest serving Pemex chief. By contrast, Lajous had a very long term — almost six years.

Since then he has worked as a former board member of Schlumberger Ltd. and adviser to firms that include McKinsey, Morgan Stanley. He is also generally regarded as Mexico’s leading oil industry analyst, with the knowledge of its internal politics than none other can probably approach.

In his Nexos article, Lajous wrote that in the medium to long term, he regards three areas of considerable potential: the GOM deepwaters, shale and tight resources in northern Mexico and Chicontepec, and part of the Tampico-Misantla Basin.

Unlike the CNH, Lajous is far from discounting the relatively near-term potential of the deep waters.

“Between 2005 and 2015,” he wrote, “exploration revealed a new area of gas in deepwater off the south of the state of Veracruz and Tabasco. About a dozen fields were drilled. Several of them were of significant dimensions and high productivity.”

The most advanced of these was Lakach, which had proved and probable, i.e. 2P reserves, of close to 1 Tcf, but it was halted, he added.

Production costs, said industry sources, were much higher than those of imports from the United States. But Lajous argued that major investments were sunk into Lakach. “Investments,” he wrote, “were made in pipelines and collection along the seabed to a gas processing plant near to Alvarado.” Alvarado is a small fishing port.

Lakach and other fields, including Piklis and Kunah, are very large, but a number of smaller satellite fields have promise in the region.