March natural gas futures and forwards markets slid nearly 20 cents on average between Jan. 27 and Feb. 2 as the market brushed off news that Punxsutawney Phil saw his shadow on Groundhog’s Day, theoretically indicating there would be six more weeks of winter, according to NGI’s Forward Look. 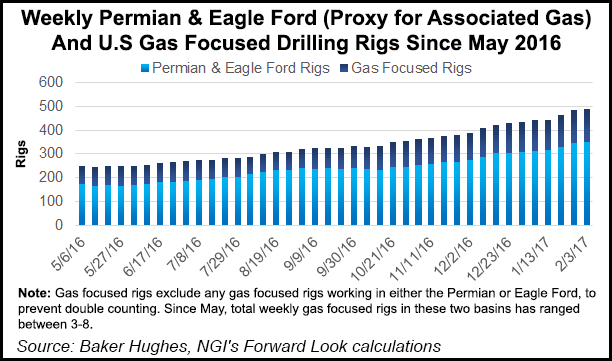 Instead, natural gas futures and forwards markets remained focused on weather models that show cold blasts fizzling out by Feb. 10, and struggling to prove any additional cold beyond the middle of the month.

“Of the coming series of storms, the coldest is still expected to sweep across the northern and eastern United States Feb. 8-10 to drive relatively strong heating demand, including deep into the Southeast. However, the effects won’t last as we continue to expect unseasonably strong high pressure to gain ground over all but the northeastern U.S. Feb. 12-15 in a rather bearish setup,” forecasters with NatGasWeather said.

How long this mid-February warm upper ridge dominates is uncertain, but it’s conceivable the markets will quickly lose hope that prolonged polar air will be able to return into the U.S. before the end of winter season, the weather forecaster said.

At 2,711 Bcf, gas stocks were 266 Bcf less than last year at this time but 59 Bcf above the five-year average of 2,652 Bcf. “Supplies are now back to sporting surpluses of +59 Bcf. While the next two draws are likely to marginally decrease surpluses due to a bit colder temperatures, they’re still expected to stall supplies near the five-year average for numerous weeks to come,” NatGasWeather forecasters said.

The weather forecaster sees the current storage situation as disappointing to the markets since they were expecting to be carrying relatively decent deficits by now with a near-normal winter instead of another milder-than-normal one.

The steep losses carried out across the front half of the curve, with the Nymex April futures contract shedding 13 cents to $3.25 and the summer 2017 strip sliding 10 cents to $3.35.

On Friday, the Nymex prompt month was down more than 10 cents at mid-day, trading around $3.07 as traders reacted strongly to news late Thursday that the Federal Energy Regulatory Commission had granted approval for Energy Transfer’s Rover Pipeline project. FERC’s order also approved the related Panhandle Backhaul and Trunkline Backhaul projects. The March contract went on to close out Friday’s regular trading session at $3.063, down 12.4 cents from Thursday’s finish and 29.5 cents below the previous week’s close.

“The front of the curve remains highly volatile as the market seeks a price level which will support additional dry gas production, without slowing much needed demand growth,” analysts with Mobius Risk Group said. “Late January production has rebounded somewhat, but until output is back above 72 Bcf/d, production data will likely be viewed as neutral to bullish.”

And soft production could be partially credited for keeping the winter 2017-2018 futures price relatively supported. While Nymex futures posted gains of less than 5 cents across the rest of the curve on Thursday, November 2017-March 2018 prices were up as much as 6 cents. Ultimately, the Nymex 2017-2018 winter futures strip ended the Jan. 27-Feb. 2 period down just 5 cents at $3.56, compared to the double-digit decreases at the front of the curve.

“The front of the natural gas curve edged higher for the second day in a row, and the winter 2017-’18 strip led the way at +$0.056/MMBtu. Prices for next winter have had solid support at the $3.50 for most of the past two months, with periodic probes lower being relatively short-lived,” Houston-based Mobius said Thursday.

Winter-time pricing will always have something of an option value priced in, according to NGI’s Patrick Rau, director of strategy and research. “The premium is a call option that winter weather will be severe. This winter hasn’t been all that bad, and there’s only a few weeks left to it, so no real premium value there. Next winter, however, is obviously very much in play, and unknown,” he explained.

From a pure financial theory, the longer the time before an option expires, the more it’s worth, everything else being equal, Rau added. So the fact that there is still a full winter of 2017/18 to go means that its severe-weather option premium should be higher versus the one for the few weeks we have left in 2016/17. “It makes sense then that prices for that time period didn’t fall as much.”

Still, there could be some downside risk to the winter 2017-2018 strip in the weeks and months ahead as producers continue to give guidance on their operations activities this year, and output from increased activity at the end of 2016 begins to come online.

“It’s looking more and more like the spigots will be opened wide when it comes to production entering the 2017/18 winter season. All these rigs that are coming on now means more production later,” Rau said.

Nationally, natural gas forwards markets across the U.S. behaved much the same as Nymex futures. March forwards prices fell an average 19 cents between Jan. 27 and Feb. 2, April dropped an average 14 cents and the summer 2017 package slid an average 11 cents, according to Forward Look. Like the Nymex, though, winter prices on a national level were somewhat supported, falling an average 6 cents.

There were a couple of pricing locations that put up much more significant decreases across the curve. New England, in particular, saw steep declines as demand was expected to plummet after reaching a weekly high on Feb. 3.

Across the country in California, several reports this week have indicated strong headwinds for gas generation in the coming months and perhaps throughout the summer as 2017 is shaping up to be a benchmark high-water year for the once drought-plagued California.

That all changed in October as there was a surge in “atmospheric river” activity, typical during La Nina conditions, resulting in the wettest October in California since 1962. In fact, several atmospheric river events throughout December and January delivered anomalous, record-setting precipitation. And between Jan. 3 and 10, the exceptional drought had been reduced by 16%, Genscape said.

Above-average precipitation since October has the potential to make the 2017 Water Year (WY) the new benchmark for strong monthly hydroelectric generation. The anomalous precipitation in January ranks it as one of the top five wettest Januarys on record, Genscape said.

“Despite above-average freezing levels, snow-water equivalent currently averages roughly 170 percent of normal in the Sierra Nevada and has surpassed levels seen in 2011. While February is expected to trend warmer, runoff from a substantial snowpack will aid in propelling above-average generation,” said Genscape’s Michaella Farese, meteorologist and demand forecaster.

Temperatures through the spring will have a large impact on the generation peak, and there is slight downside risk to summer hydro generation if warmer temperatures lead to an earlyrunoff season, she said. Should Genscape’s expectations for seasonal precipitation through spring verify, there is a high probability that WY2017 becomes the new benchmark, Farese said.

“This portends strong bearish headwinds for thermal generation. As California’s water supply has been steadily increasing, [electricity] forward NP[-15] and SP[-15] prices have been decreasing. With much healthier storage in reservoirs, coupled with above average snowpack in the southern Cascades and northern Sierra Nevada, there will be ample runoff for hydroelectric generation in the coming months,” Farese said.

So far, natural gas forward curves in California do not appear to be reflecting the potential impact on gas generation as prices through the summer are currently tracking higher than both last year and 2015 levels.

U.S. onshore oil and natural gas production is set to rise from October to November, propelled by supply growth in the Permian Basin and Haynesville Shale, according to updated projections Monday from the U.S. Energy Information Administration (EIA). Natural gas production from seven key U.S. producing regions — the Anadarko, Appalachia and Permian basins, along…