The U.S. Forest Service (USFS) said it “is concerned” that two proposed Appalachia-to-Southeast natural gas pipelines would traverse steep slopes subject to erosion, and it has asked its backers to submit additional information as it considers issuing special use permits for the projects. 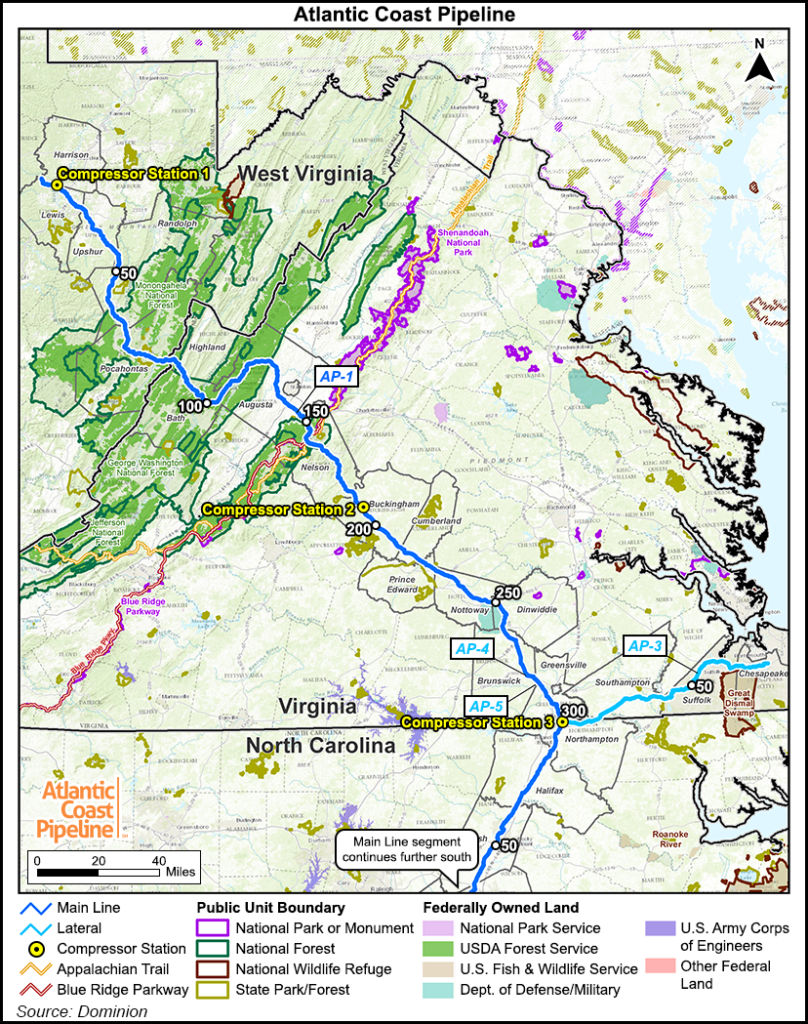 “These hazards are exacerbated by high annual rates of precipitation and the potential for extreme precipitation events. Similar hazards on other smaller pipeline projects in the central Appalachians have led to slope failures, erosion and sedimentation incidents, and damage to aquatic resources. Therefore, USFS is concerned that crossing such challenging terrain with a much larger pipeline could present a high risk of failures that lead to resource damage.”

Thompson acknowledged in his letter that ACP “has proposed implementing ‘best in class’ slope stabilization and erosion/sedimentation control measures,” and has provided general descriptions and conceptual drawings in other filings. He said USFS had asked ACP to provide information on how effective the company’s techniques have been elsewhere.

“To further clarify the likelihood that the ACP can be constructed through the George Washington and Monongahela National Forests without undue risk of resource damage, the USFS is requesting that ACP develop site-specific stabilization designs for selected areas of challenging terrain,” Thompson said. He added that USFS staff had identified 10 areas — six in the George Washington National Forest and four in the Monongahela National Forest — that “appear to present a high risk for slope failure, slippage, and erosion/sedimentation.”

Timm added that USFS “expects MVP to submit an amended Special Use Permit application to address USFS’s previous comments on the proposed MVP project route.” Thompson did not make a similar statement in his letter to ACP.

Last May, USFS told FERC that MVP’s current plan to cross the Appalachian National Scenic Trail was “inadequate” and said the company should reconsider its plan for the crossing (see Daily GPI, May 17).

ACP and MVP each submitted applications with FERC last fall and have similar aspirations to connect producing areas in the Appalachian Basin to markets in the Southeast and Mid-Atlantic (see Daily GPI, Oct. 23, 2015; Sept. 18, 2015). Both are targeting in-service dates in late 2018.