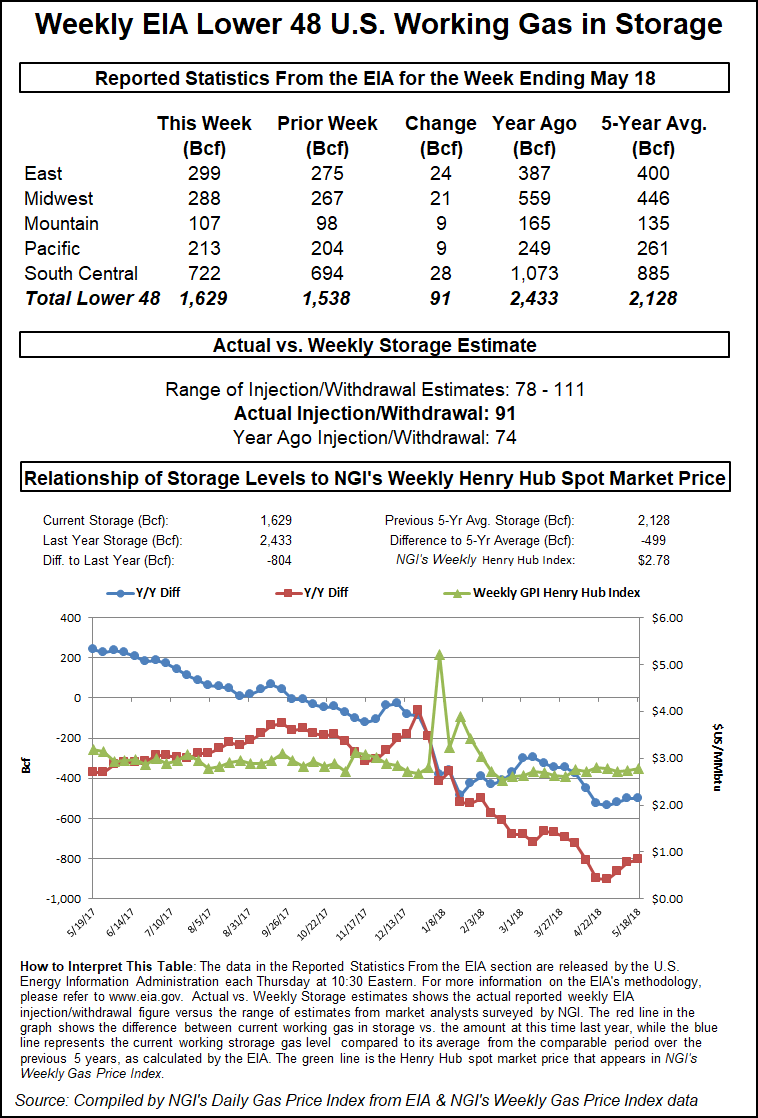 With widespread above-normal temperatures across the southern and the central United States during the week, including highs in the 90s in some major population centers, spot prices strengthened throughout the Midwest and Texas.

In the Northeast and Appalachia, prices were mixed as a number of maintenance events have been reported in the region recently. Algonquin Citygate fell 14 cents to $2.35, while Transco Zone 6 New York added 30 cents to $2.76. Dominion South fell 6 cents to $2.18 as Columbia gas added 9 cents to $2.71.

Western Canada “has entered the Twilight Zone” as maintenance restrictions have led to mid-May storage withdrawals in the region, according to TPH analysts, who compared AECO’s recent recovery to the improbable Stanley Cup run of the Vegas Golden Knights hockey team. The recent gains at AECO are no small feat given how bleak things looked at the trading point earlier this month, when spot prices set a new all-time low after averaging in the negatives.

“This week, maintenance is curtailing field receipts by as much as 1.8 Bcf/d, with little impact to export volumes, meaning withdrawals have been required to meet demand,” the TPH team said Friday. “We’ve drawn gas each of the last three days, and this could continue for another week until work on the Grande Prairie Loop is complete.”

The focus is on the weeks ahead, but the most recent inventory report “showed a 5 Bcf build (versus a seasonal norm of 8 Bcf) and next week we’re looking for a 4 Bcf build,” TPH analysts said. “With the data lag, we won’t see the impact of maintenance for another two weeks, at which point an inventory draw is a distinct possibility. The forward strip seems to be coming around on our bullish AECO view” after recent gains.

Natural gas futures bulls ran out of steam Friday, at least temporarily, with the prompt-month finishing near even as forecasters pointed to milder conditions expected over the East by the second week of June. After gaining throughout the week, including a nearly 10-cent rally last Tuesday on a hotter trending weather outlook, the June contract settled 0.1 cents lower Friday at $2.939. Week/week (w/w) June gained close to a dime after settling at $2.847 the Friday before.

The Energy Information Administration (EIA) on Thursday reported a natural gas storage injection that confirmed consensus estimates for a larger-than-average build shy of the triple-digit mark, and futures gained a few cents on the news.

For the week ending May 18, EIA reported a 91 Bcf injection into Lower 48 gas stocks, right in line with surveys and larger than the 74 Bcf build recorded last year and the five-year average 89 Bcf injection.

Prior to the report, the market had been looking for a build close to the actual number, according to major surveys.

Total working gas in underground storage as of May 18 stood at 1,629 Bcf, versus 2,433 Bcf last year and five-year average inventories of 2,128 Bcf. The year-on-year storage deficit decreased w/w from 821 Bcf to 804 Bcf, while the year-on-five-year deficit narrowed slightly from 501 Bcf to 499 Bcf, EIA data show.

By region, the South Central region saw the largest injection for the week at 28 Bcf, with EIA reporting 19 Bcf injected into nonsalt and 10 Bcf into salt. The East saw a build of 24 Bcf, while 21 Bcf was injected in the Midwest. The Mountain and Pacific regions each saw 9 Bcf refilled for the week, according to EIA.

Though the EIA report fell in line with market expectations, “the failure to significantly erode the deficits continues to give forwards some momentum,” Jones said.

“Production growth has been driven by the Haynesville in 2018, which is up over 1 Bcf/d (and at its highest level since early 2013), largely driven by private operators,” the Jefferies team said. “…The Permian Basin (up 0.6 Bcf/d year-to-date) and Appalachia (up 0.3 Bcf/d year-to-date) have been the other largest growth areas, offset by aggregate declines of around 0.4 Bcf/d in the rest of the U.S.”

On the demand side, Jefferies said natural gas power burn has averaged 24.1 Bcf/d year-to-date, up about 2.4 Bcf/d y/y and about 2 Bcf/d higher y/y thus far in the month of May.

“While weather and gas prices are always factors that impact gas power burn, the move higher y/y likely shows some of the shift in the mix of U.S. power generation (more gas/less coal),” according to the Jefferies analysts. “If the current y/y growth in power burn continues through the remainder of the refill season (and recall that late Summer 2018 temperatures were below average, leaving 2018 with an easy y/y weather comparison), it could leave storage at much lower than average levels.

“We estimate that if production continues at its current roughly 7.2 Bcf/d higher rate through the refill season and power burn continues at roughly 2.0 Bcf/d higher, that storage would end October at about 3.4 Tcf” or about 10% below average.

Meanwhile, crude oil futures took a hit Friday as the Saudi Arabia energy minister said that the Organization of the Petroleum Exporting Countries (OPEC) and its allies, including Russia, could ramp up more oil to global markets “in the near future” to fill the gap from U.S. sanctions on Iran and the loss of Venezuela output.

During a panel discussion hosted by CNNMoney, Khalid Al-Falih said discussions are ongoing with cartel members and Russia to balance the market and reduce prices. OPEC and its allies are scheduled to meet June 22 to discuss, among other things, the supply reduction put in place that has pulled since last year about 1.8 million b/d total from the market.

“It is the intent of all producers to ensure that the oil market remains healthy, and if that means adjusting our policy in June, we are certainly prepared to do it,” Al-Falih said. “Two years ago we pulled supply. I think in the near future there will be time to release supply.”

The July Nymex West Texas Intermediate crude oil contract tumbled back below the $70/bbl mark Friday, giving up $2.83 to settle at $67.88/bbl.

In recent weeks, a number of analysts have offered up bearish predictions for long-term natural gas prices based in large part on the hypothesis that continued growth in associated gas from oil-focused U.S. onshore activity will see supply outpace demand.

Turning to the spot market, moderating temperatures drove Northeast prices lower on deals for delivery over the long Memorial Day weekend, as the NGI National Spot Gas Average dropped a penny to $2.50/MMBtu.

Radiant Solutions was calling for highs in Boston Saturday to climb into the mid-80s, with temperatures around 10-15 degrees hotter than normal. By Sunday and Monday, however, temperatures were expected to cool into the 50s and 60s, slightly below normal, according to the forecaster.

According to Genscape, with the hot temperatures late in the week demand in the New England region was on track to climb to 2.7 Bcf/d Friday, about 1 Bcf/d higher day/day (d/d) and 1.5 Bcf/d above the month-to-date average.

While Friday’s demand would be “shy of early-April levels, those were driven by HDDs,” Genscape analyst Rick Margolin said. “It is rather uncommon for CDD-driven demand in New England to breach 2.6 Bcf/d.” Before Friday, “the record high for a May-September period was 2.64 Bcf/d back on July 22, 2011,” when the daytime high reached 88 degrees.

Algonquin Gas Transmission was scheduled to conduct an outage in the next few days at its Chaplin compressor station in Windham County, CT, reducing capacity through the station by 304 MMcf/d to 705 MMcf/d, according to Genscape analyst Josh Garcia.

“Current forecasts show a spike in CDDs” on Friday and Saturday “before returning to milder temperatures” by the start of the week, “but if temperatures remain hot, this event could provide bullish risk to Algonquin Citygate prices,” Garcia said.

The midday weather data Friday continued to advertise hotter trends over the weekend and into the start of June, according to NatGasWeather.com.

“However, the data maintained mostly comfortable conditions over the East June 6-10 for lighter demand, especially the Northeast, countering hot conditions over Texas and the South where highs are likely to reach the 90s to 100s,” the firm said. “We see the weather data as somewhat bullish” in the week ahead given heat in Texas and the central United States, “then becoming neutral once the eastern U.S. becomes mostly comfortable June 6-10.”

In the event of more heat showing up in weekend guidance over the East after June 5, “we expect the natural gas markets would view weather patterns as bullish throughout,” NatGasWeather said.

Also on the weather front, the 2018 Atlantic hurricane season appeared to be off to an early start Friday as the National Hurricane Center said Subtropical Storm Alberto was “meandering over the northwestern Caribbean Sea” and expected to bring heavy rainfall to the Yucatan Peninsula, western Cuba, Florida and the northeastern Gulf Coast through the weekend.

“We cannot rule out the possibility of this system becoming a hurricane before it makes landfall sometime on Monday or Monday evening,” AccuWeather hurricane expert Dan Kottlowski said.

In terms of market impact, Alberto is likely to be seen as “bearish for demand across the Southeast due to cooler than normal temperatures and heavy showers, according to NatGasWeather.

Along the Gulf Coast, Henry Hub notched a 2-cent gain to $2.89 Friday, while Houston Ship Channel shed a penny to $2.99.

Texas Eastern (Tetco) is expected to conduct maintenance events for the upcoming week impacting portions of the pipeline in South Texas, East Louisiana and in its M2 market zone in the Northeast, according to Garcia.

Starting Tuesday (May 29) and continuing through June 13, Tetco is expected to conduct investigations on its 16-inch diameter Line 21 between the Thomaston and Provident City compressor stations in South Texas, Garcia said, adding that the work could impact up to 263 MMcf/d of receipts, though reroutes are possible.

Between Wednesday and June 13, “Tetco will conduct an outage between the Colerain Compressor Station and the mainline” in the M2 zone, according to Garcia. “Gas sourced on this lateral will be unavailable for flow to the mainline for the duration of this event, creating bullish pressure for M2 prices, although reroutes to other pipes are possible. Net receipts from affected meters have average 226 MMcf/d and maxed at 250 MMcf/d over the past 30 days.”

Lastly, beginning next Friday (June 1), “Tetco will replace a segment of pipe between the St. Francisville and Union Church compressors in it East Louisiana tariff zone,” Garcia said. “Flows on the southern end of its 30-inch line will be limited to 972 MMcf/d until June 14. Flows at St. Francisville and Union Church have had minimal difference, averaging 1,054 MMcf/d and maxing at 1,333 MMcf/d over the last 30 days, although they have been significantly reduced over the last few weeks.”

In the West, SoCal Citygate dropped 12 cents to average $2.36 as utility Southern California Gas was calling for demand on its system to fall below 2 Bcf/d over the holiday weekend. Elsewhere in the region, SoCal Border Average dropped 2 cents to $2.10.

In Canada, NOVA/AECO C dropped C11 cents to average C$1.72, after gaining earlier in the week, including a C57 cent surge in trading Wednesday.