The first forecast jolt of major heat and humidity across major population centers was able to lift weekly prices across almost all delivery points. For the week ended July 17, the NGI Weekly Spot Gas Average gained a solid 18 cents to $2.62, and only three market points, all in New York, fell into the red. 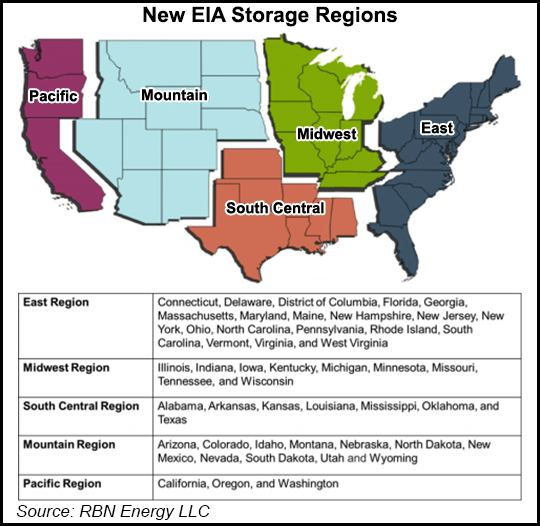 Gains of a dime to a quarter were common, and the location showing the week’s greatest advance was Kingsgate, up 44 cents to $2.79. The week’s biggest individual loser was Transco Zone 6 NY dropping 11 cents to average $2.06 followed closely by Transco Zone 6 non New York North with a 10-cent decline to $2.06 as well.

For the week August natural gas futures added a dime to $2.870 and market concern about upcoming heat was able to override a market storage report that exceeded analysts expectations by about 5 Bcf. In Thursday’s trading futures subsided after the Energy Information Administration (EIA) reported a greater-than-expected 99 Bcf build, but bulls may have the last laugh. Spot futures now stand 10 cents higher than a week ago following two successive bearish inventory reports. At the close Thursday August had retreated 6.4 cents to $2.854 and September was down 5.6 cents to $2.853.

Futures traders saw the day’s decline consistent with the above-expectations 99 Bcf storage injection. “The market thought about it and said ‘You know what? We’re still putting some good injections in here. Maybe we should come off,'” a New York floor trader said.

Last year 105 Bcf was injected and the five-year pace stands at 71 Bcf. Analysts at IAF Advisors calculated a 96 Bcf increase and ICAP Energy expected a 90 Bcf build. A Reuters survey of 27 traders and analysts revealed an average 95 Bcf with a range of 84 Bcf to 107 Bcf.

Inventories now stand at 2,767 Bcf and are 653 Bcf greater than last year and 73 Bcf more than the 5-year average. In the East Region 57 Bcf were injected and the West Region saw inventories increase by 10 Bcf. Stocks in the Producing Region rose by 32 Bcf.

RBN Energy reported Friday that “EIA is planning to split the U.S. gas inventory data into five regions, from three macro regions currently. The idea has been floating out there for a while, but now it looks imminent, with a good chance it is rolled out before the gas winter season comes around in November. When it does happen, the increased granularity will vastly improve the transparency of natural gas storage inventory data on a weekly basis.”

Little should change, but instead of an East Region, a West and a Producing Region, there will now be five regions to accommodate withdrawal and injection data. The five new regions are Pacific, Mountain, South Central, Midwest and East.

“We’ve known about this for a while, but it’s just been pushed back so many times because they have 50 other things going on,” said John Sodergreen, publisher of Energy Metro Desk.

RBN posited that the changes are likely to have tectonic dimensions and said “it will break everybody’s storage scrapes and models. Storage modelers and forecasters will have their work cut out for them.”

That view is not widely held.

“Scrapes are scrapes, and it shouldn’t affect the report, but what it should do is shore up at least how accurate we are in the East, and I think it will help that quite a bit, but the Producing Region will be somewhat skewed as it has been,” Sodergreen said. It should tighten up those other regions and make them that more accurate.”

Analysts see the minimal storage surplus relative to the long-term averages as consistent with Friday’s relatively narrow trading range. “This market is maintaining a trend of showing limited price follow-through in either direction as supply and demand don’t appear significantly mismatched at the present time,” said Jim Ritterbusch of Ritterbusch and Associates in a Friday morning report to clients.

“Although [Thursday’s] 99 Bcf injection was some 4-5 Bcf larger than expected, the supply surplus against five-year averages remains less than 75 Bcf, a comparatively small deviation from normal suggestive of a relatively narrow futures trading range. Although updates to the one- to two-week weather forecasts now appear tilted back in a bullish direction, expected deviations from normal don’t appear sufficiently extreme to sustain price advances much above this week’s highs.

“And although the market may still need to discount a sharp reduction in storage injection of as much as 30-35 Bcf per next Thursday’s EIA release, the dynamic of a surplus expansion is expected to stabilize through the rest of this month. Consequently, the market will be heavily dependent upon weather surprises such as an unexpected sustainable hot spell or a major storm event if a $3 price handle is to be re-established.

“As is the case within the liquids, natural gas production and rig counts are apt to go their separate ways. Production that has recently returned to near-record levels following extended maintenance will likely see a leveling or slightly declining trend across the second half of this year that will be taking some steam out of a bearish argument. But on the other hand, the demand side of the ledger could prove supportive as we still see longer-term trends favoring additional coal-to-gas substitution that will be cranking up electric generation demand to higher levels than generally expected within some of the upcoming EIA releases.”

In Friday’s trading gas for weekend and Monday delivery seemed like a tranquil affair as most points outside the East and Northeast fell anywhere from a few pennies to upwards of a dime or more. NGI‘s National Spot Gas Average showed a 1-cent gain to $2.60. The Northeast and Mid-Atlantic were a far different story, however, where weekend power loads and prices soared and Sunday loads took the unusual turn of being forecast higher than Friday. Futures wallowed in a narrow 5-cent trading range, but they managed to inch higher with August up by 1.6 cents to $2.870 and September adding 2.1 cents to $2.874.

AccuWeather.com forecast that New York City’s Friday high of 81 would rise to 83 Saturday and climb to 91 on Sunday. The seasonal high for New York is 84. Philadelphia’s Friday maximum of 83 was predicted to reach 89 Saturday and 95 Sunday with a heat index of 105. The normal mid-July high for Philadelphia is 87.

The price matrix wasn’t quite so stressed in the Great Lakes. A Michigan marketer said, “We bought a little gas for the weekend, but we don’t seem to have that much more gas to buy throughout the course of the month. We are hot through the weekend, but then it basically kicks back to average around here. It’s not going to be that hot, in the 80s,” he said.

Gas for weekend and Monday delivery on Alliance and at the Chicago Citygate was flat at $2.91, and gas on Consumers dropped a penny to $2.97. Deliveries to Michcon added a penny to $2.97, and gas at Demarcation fell 2 cents to $2.85.

PJM buyers for weekend gas to fuel electric generation may have to add a few logs to the fire as renewable generation across the power pool is expected to be light. “High pressure will continue to promote fair and seasonable conditions across the Mid-Atlantic today, but scattered storms are expected to pop up over western PJM,” said forecaster WSI Corp. in a Friday morning report to clients.

“It will trend warmer and more humid during the weekend, though this will support a chance of scattered showers and thunderstorms. High temps could top out as high as the mid 80s to mid 90s. A cold front is expected to sag southward during Sunday night into Monday with a chance for showers and thunderstorms. A few storms could be strong. Fair, warm and less humid conditions are expected in wake of the front by Tuesday. A variable west-southwest breeze will lead to periods of modest wind generation throughout the forecast period. Output is forecast to top out in the 1-2 GW range.”