The coronavirus continued to wreak havoc on the global gas trade on Friday amid the fallout from a force majeure in China that helped push prices to record lows in Northeast Asia as more cargoes headed toward the mainland and others changed course. 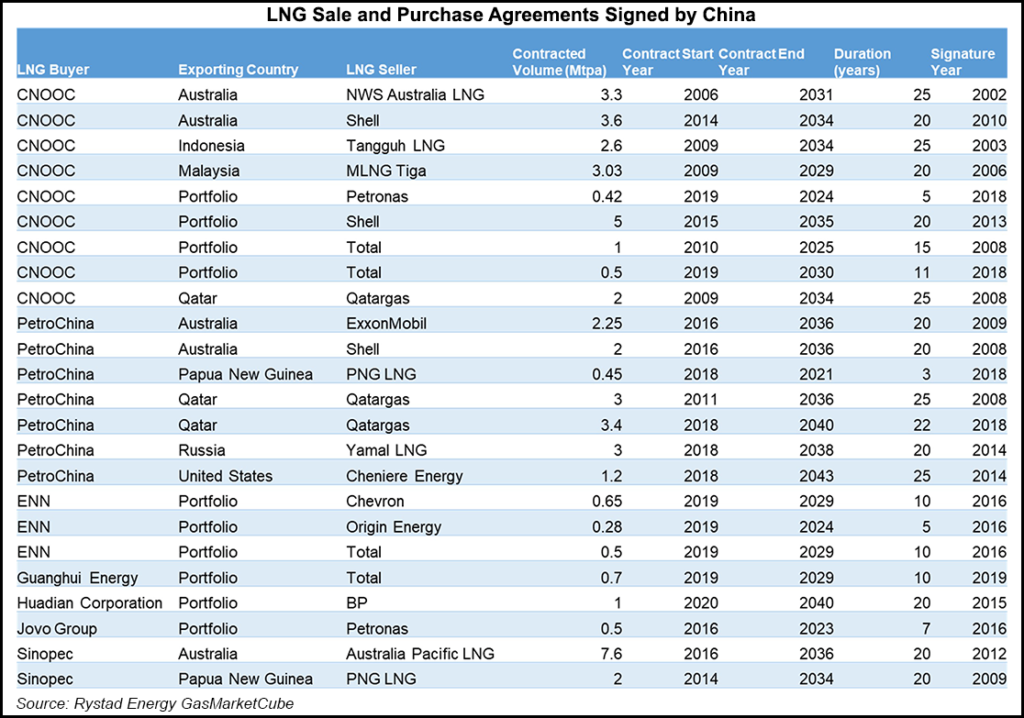 The outbreak in China is cutting into liquefied natural gas (LNG) demand, exacerbating a supply glut that’s dogged the global market on a steady flow of production and warm winter weather in the Northern Hemisphere. Oil prices also continued to move lower as the week came to a close.

China National Offshore Oil Corp.’s (CNOOC) decision to declare force majeure and refuse some contracted LNG shipments due to weak demand and the virus sent another bearish signal to the global market. Meanwhile, quarantines, travel restrictions and requirements that vessels allow 14 days to pass before they enter ports in some parts of the world could disrupt global shipping, sources said.

It wasn’t entirely clear what will happen to the cargoes CNOOC said it can’t take. Total SA confirmed that it rejected the notice, while Royal Dutch Shell plc reportedly did the same. It’s also unclear if those shipments were being delivered under long-term or spot contracts.

CNOOC would likely pay for the cargoes under the take-or-pay clauses typically included in longer-term deals, but it might have more leeway under a spot transaction. For example, if the seller could get a certain percentage of the price in the open market that CNOOC originally agreed to pay under a spot purchase, then the state-owned company would likely only be required to pay the difference.

Long-term contracts, however, are often linked to the previous three or six month average of an oil benchmark and are earning more than transactions in the spot market where prices have plummeted.

“If you read between the lines here, they’re force majeureing at a time when prices are at the absolute rock bottom,” said Brad Hitch, a long-time LNG trader and former portfolio manager at Cheniere Energy Inc. “As an outsider, when you look at something like that — and Total did reject it — the conclusion you’re going to draw from that is what people sometimes refer to as ”price majeure.’”

Total’s Phillipe Sauquet, president of the Gas, Renewables and Power segment, alluded to that concept on Thursday at an event to discuss the company’s year-end earnings, saying warmer weather has crushed prices and hurt buyers paying more under long-term contracts.

“…There is a strong temptation from some long-term customers to try to play with the force majeure concept, to say, ”okay, I cannot take my cargo under the long-term contract, but I would like to buy on spot, which is a bit contradictory.”

Total has two long-term agreements with CNOOC for 11 and 15 year terms that started in 2010 and 2019, according to Rystad Energy. Shell also has two long-term agreements, each for 20 years that started in 2014 and 2015. Other state-owned companies such as PetroChina Co. and China Petroleum and Chemical Corp., aka Sinopec, are reportedly considering force majeures too, as some LNG discharges have been delayed and workforces have been impacted by the virus.

“The Chinese continue to bring in a lot of cargoes,” Hitch told NGI. “And while the coronavirus appears to be severe and impacting demand, why would you force majeure some cargoes and not others?”

The situation, particularly the possibility of more severe shipping disruptions, has “Pandora’s box written all over it,” he added.

Indeed, China is still taking in significant amounts of the fuel, according to ship tracking data provided by analytics firm ClipperData. About twenty LNG vessels are currently traveling for the country and set to arrive in the next 15 days. Eighteen vessels have arrived at Chinese import terminals over the last seven days, compared to 13 at the same time last year.

An ongoing trade war with the U.S. has found few cargoes — about three since last year — leaving the shores of Maryland and the Gulf Coast for China. But the country is the world’s second largest buyer of LNG behind Japan, with contracts to buy 50 million metric tons/year, according to Rystad.

Global gas prices were already low and the coronavirus has sent them spiraling further. Spot prices in Northeast Asia fell below $3.00/MMBtu on Friday, compared to more than $5.00/MMBtu at the same time last year. Futures there aren’t faring any better and benchmarks in Europe are trading around $3.00. That’s battered the spread between the Gulf Coast and those markets.

ClipperData said Friday that at least one ship had been diverted on its way to China, while Bloomberg ship tracking data showed that five have been diverted.

Fearnleys’ Gonzalo De Arteaga, a senior analyst at the Norwegian ship broker, said the situation is for now negative in the near-term. He told NGI that more ships could serve as floating LNG storage if they can’t unload in China.

Spot vessel rates have declined to about $70,000 from earlier in the week in both the West and East, according to Fearnleys. March prices were said to be inching upward, according to other forecasts.