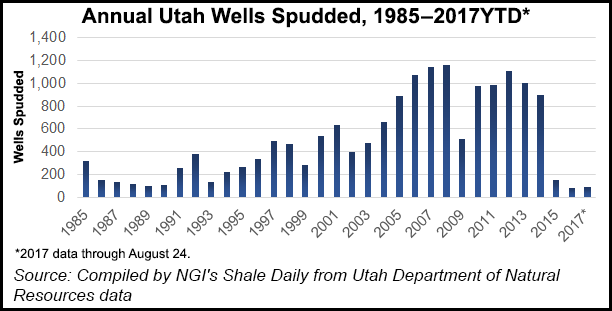 In an operational update Wednesday, the Denver-based independent said it would re-enter the Duck Creek 8-16GR and 17-GR wells in September. The wells are in the Duck Creek area of Uintah County in the Natural Buttes field. The recompletions are targeting the Douglas Creek, Black Shale and Castle Peak Limestone-Sandstone formations in Green River at depths of 4,100-4,850 feet. Foothills estimated the possible potential of 35,000 bbl/well of recoverable oil, based on offset analogs as the zones have been productive on adjacent properties.

The estimated costs to recomplete the wells are $100,000 each, with every recompletion potentially yielding another 20-40 b/d of output. If the initial recompletions are successful, Foothills said the Duck Creek 51-8GR and 7-16GR also could be “excellent recompletion candidates…both of which have similar bypassed pay zones and behind pipe oil production potential of 35,000 bbl each.”

Foothills said a third-party reserve report found acreage acquired last December in the Altamont-Bluebell and Brundage Canyon areas holds about 5.4 million bbl of proved undeveloped reserves. The assets were acquired from Tiger Energy Partners International LLC. The company said well depths are from 5,550 feet in the Brundage Canyon area to about 18,000 feet in the Altamont-Bluebell area.

“A number of the adjacent wells in the Altamont-Bluebell area have recovered over 1 million bbl of oil individually, although there are no assurances that we will be able to achieve similar results,” Foothills said. “The development of these wells will require additional drilling capital. We anticipate developing a comprehensive drilling program and budget over the next 45 days that will specify costs, drilling phases and other details that we will disclose after being finalized by management.”

Foothills needs to cover additional costs before developing the properties, including payments to settle outstanding liabilities incurred by the previous operator, lease bonus payments and other costs.

CEO Kevin Sylla said the company “has a solid foundation for development in the Rockies and is committed to growing its presence and operations in the Uinta Basin. We believe that this focus on our current properties will unlock considerable shareholder value while we continue to look for bolt-on acquisitions and strategic partnerships to grow our footprint regionally. Our goal remains to leverage existing relationships and synergies in the area and become a Rockies pure-play company.”

Foothills has retained Roth Capital Partners to serve as its financial adviser, and together they are “evaluating a wide range of financing options, including debt, equity, project level financing and joint ventures.”

Meanwhile, the producer has agreed to terminate a PSA with an undisclosed seller for 67,330 gross (49,600 net acres) held by production in the Piceance Basin. Financial terms of the deal were not released. The acquisition was expected to close in June.