Liquefied natural gas (LNG) marked a banner year in 2019, with new investments and liquefaction project start-ups among the slew of records set for the growing industry, according to analytics firm IHS Markit. 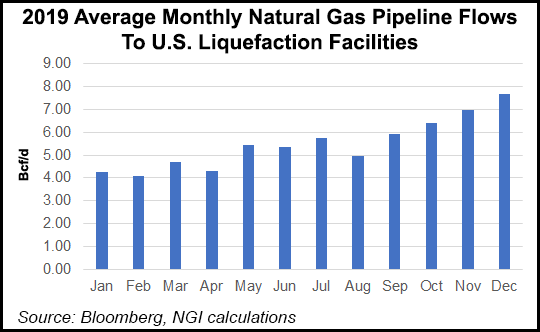 Final investment decisions (FIDs) for liquefaction projects were made at an “extraordinary level” of 70.4 million metric tons/year (mmty) last year, which was 40% higher than the previous all-time high of 50.4 mmty reached in 2005, the firm said. The United States, Russia and Mozambique each set individual highs for levels of annual FIDs.

“The ongoing pace of new investment is especially noteworthy considering a market context of weak global prices”, said IHS Markit’s Michael Stoppard, chief strategist, global gas. “Not only did LNG grow at an unprecedented rate in 2019, but the industry also laid the foundations for continued strong growth into the middle of the decade.”

Some liquefaction FIDs were made either without long-term contracts or were underpinned by sales to affiliates. Such “affiliate marketing” reached a record 43 mmty, IHS said. These projects included an expansion of Nigeria LNG’s Bonny plant that would add a seventh train and boost capacity by 35%. It was sanctioned in December. Russia’s largest private natural gas producer Novatek and its partners pulled the trigger on the $21 billion Arctic LNG-2 project in September.

“Affiliate marketing at this scale has not been common in the LNG industry,” the firm said. “Historically, most projects have instead secured long-term offtake contracts prior to committing to investment. By choosing to proceed without third-party contracts, projects can be developed more rapidly.”

Although the pace of project starts is expected to slow in 2020 to 28.6 mmty, the United States is projected to continue commanding this area as it completes its so-called first wave of projects. Sempra has targeted the first half of 2020 for bringing into service the third train at the Cameron terminal. Freeport began commercial operations at the second production unit at its facility last week, with a third train expected online in May.

Meanwhile, Australia surpassed Qatar as the top LNG exporter for 2019, reaching 80.2 mmt relative to 72.5 mmt in 2018, according to IHS. The firm sees Australia extending its lead in 2020 and retaining its position as top exporter until 2023, when the United States is projected to become the largest LNG producer.

“Australia’s 10 LNG projects have a combined capacity of 87.8 mmt. However, with only 88% of total nameplate capacity used over 2019, there remains opportunity going forward to lift the current production milestone even higher,” CEO Graeme Bethune said.

For example, the Royal Dutch Shell plc-operated Prelude floating LNG project offshore Western Australia is only expected to reach full capacity this year. The 3.6 mmty project achieved initial start-up at the end of 2018. Qatar does not appear to release actual production numbers, but capacity is 77 mmty, Bethune said.

Rystad Energy also noted Australia’s move into the driver’s seat last summer, but opined that Qatar would reclaim its position in 2024.

China overtook Japan as the world largest LNG importer in December, with volumes for the month reaching 7.3 mmt, compared to Japan’s 6.9 mmt, according to IHS. Although Japan is expected to continue to be the world’s largest LNG importer on a total annual basis through 2022, 2019 marked the second year in a row of declining imports for the country. Its imports posted the largest year/year decrease across the globe, continuing an overall downward trend since 2015.

China maintained its No. 2 import position for all of 2019 and entered its fourth year in a row of record LNG imports, increasing 13.4% year/year. South Korea rounded out the top three, importing 41.0 mmt in 2019 but posting the second largest decline year/year behind Japan.

Europe also set a record for imports each single month as well as for 2019 as a whole, the IHS Markit team said. Annual net imports totaled 87.2 mmt, which exceeded the previous record of 65.5 mmt set in 2011.

Imports into Europe are expected to remain strong in 2020 due to additional new liquefaction supply coming to market and new supply expected to outpace Asian demand growth. However, LNG inventory levels in Europe have scarcely budged this winter, standing at 55% of capacity on Monday, according to Aggregated LNG Storage Inventory. That compares to the five-year average of about 52% for this time of year. Some European benchmarks have hit their lowest levels in years as a result, while spot prices have also suffered as inventories are high in other parts of the world.